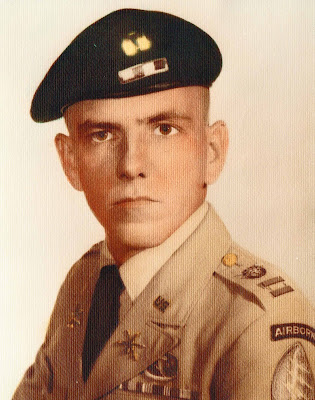 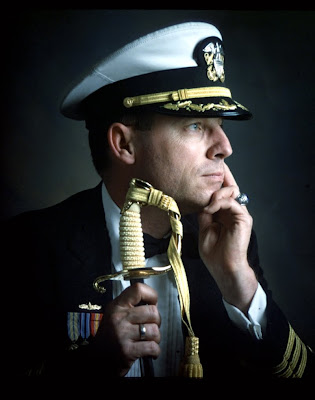 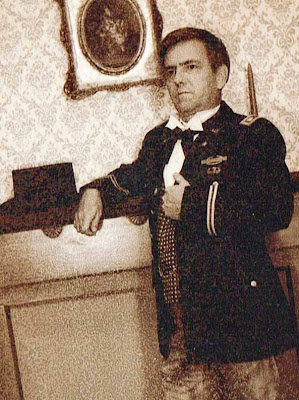 His mother begged him for a retirement photo in dress blues. He didn't like the idea. Already displayed in Sophie's living room was a framed 8x10 of him from 10 years earlier. It was B&W but Sophie had it hand colored. He detested it. There was an air of the '40s about it. Not in a warm Kodachrome way but in a badly colorized movie way.

He was at Ft Belvoir while his family was stuck in Colorado Springs trying to sell a house he put too much money into. Instead of the kitchen or bathroom, he threw it into a finished basement with darkroom and wood shop. He even installed underground sprinklers. Down the street, a new model of the same house was considerably less. Donald Trump he was not.

My grandparents lived in Arlington, VA and he saw them every Sunday while stationed at Belvoir. Every Sunday Sophie begged him for the dress blues picture. Full color, textured and Olan Mills, would have made her day. He only relented when he realized he could do it his way.

An ersatz daguerreotype from one of the many cheap studios so popular in the '70s. Take your pick from Civil War costumes, saloon floozies or wild west gunfighters. He picked his dress blues. Only decorations were what meant the most to him. Combat Infantry Badge and jump wings. It was 5x7. Sophie mounted it into an oval frame. She was ecstatic. So was he.
Posted by tintin at 07:08

I keep writing things down in this space and they all sound trite upon review. I will just say that this is a tremendous eulogy.

As I mentioned yesterday, it's bittersweet, however, I've had my share of laughter from these posts.

Quite an amazing man, reminds me a lot of my father, an Army & Vietnam Vet. In retrospect, whatever their shortcomings, they made up for in character.

Really touching and funny stories, JT. Thanks for sharing them.

It's been a while since I've been able to catch up.
Very sorry to hear about your father. I concur with Randall's comment.

I have great memories of Ft. Belvoir. My father took me there frequently when I was a child. My own son shot his first bow at Ft. Belvoir and got his first haircut there.