Seven Days of Memories: Over The Top 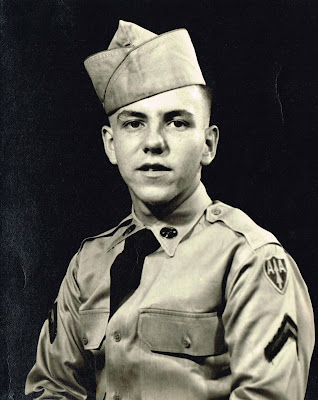 "You'll recall, that I was also an Army Brat for 18 years. My dad (your grandfather), a WWII officer and later Command Sergeant Major, almost never gave me advice on anything. I was expected to learn from observing his behavior -- both personal and with his troops.

Throughout his life, he and I never had a serious conversation. When I asked for his approval to marry (your mother) at age 18, (hoping he'd refuse), he simply wrote "approved." He complimented me on very few occasions: your birth, my university degree, my jump wings and Combat Infantry badge, my final promotion to "Lite" Colonel. We're of Norwegian stock. Cold on the outside (not huggers), but warm enough on the inner. We care, we just don't show it. Main thing I learned observing your grandfather, was that an NCO or Officer's primary duties was "take care of your troops."

So, in "my" Army, as an NCO and Officer, you put your ass on the line to look out for your troops. Sadly, in today's Army, NCOs and Officers often put their troops asses on line in order to protect their own sweet, perfumed asses." FMT

He drove up to Ft Benning to pin jump wings on my chest. After the graduation ceremony he was ready to drive me back home. Problem was, I had leave papers but they had not been signed by the company commander. A nasty little man who liked to call men, "Honey" and go on leave without signing leave papers.

I explain this to him standing in the hallway outside the 1st Sergeant's office. There's about 30 of my classmates in the same situation. We're all hoping the 1st Sergeant, or 'Top' as 1st Sergeants are known, can do "something."

He takes my leave papers and strolls down the hall. I see him knock on the door frame and enter Top's office. He's been retired just over a year. I'm thinking there's not much he can do when I see him walk out of the office carrying my leave papers and doing the silent whistle -- That purse of the lips with nothing coming out.

He tells me somewhere on I-95 that Top was "chicken shit" and "scared shitless" he'd get his "ass in a sling" signing for the captain. He tells me the captain is a "fuck stick" for what he did but what Top did was worse. "It's a gutless fucking army." he moans.

I just realized that 80% of my vocabulary is in the above paragraph.
Posted by tintin at 08:15

I don't know if 80% of your vocabulary is in that last paragraph, but judging from many of your previous postings, I-95 seems to have played a big role in your past.

How many innocent people did he murder for the American Empire?

Is this the same guy who did the Gumby drawing that you use for your profile photo?

Gee Tintin, I bet you were a really popular guy that day...

T: thank you for these and for the earlier glimpses of your old man. I'm sad for you.

Laguna Beach Fogey? Sounds like a personality disorder. Did you ever look at this guy's blog? There are some strokes of genius but they're buried under vapid disjointed posts and phoney British aspirations.

Keeping with the Trad Dad theme and calling it like I see it.

Yo Fogey,
Didn't you once tell me that something was your canvas so you can post whatever you want? Wouldn't that apply here?
Ooooooo, right, this is the part where you show how cool you are by being insensitive, inappropriate, wrong, and then you run away.
You are good at that game. Carry on.

I know exactly what your are talking about..

I didn't do a four year enlistment as you did, I did a 1.5 your involuntary stint in the Swedish army (although they put brass on my shoulders, cold war anticipation shit). But the Army is the army and it has always been like that (the Roman legionnaires had a 15 years obligatory, without no leave whats so ever)

That leave shit, that you respect and fear when you are in the army, is strictly bullshit (BS)..

This piece made me laugh out loud–it was that funny.These are wonderful stories.

Laguna Beach Fogey, don't you have another post to write about your favourite Creed perfume or something? I'm sure your fans are dying for another soporific glimpse into your fantasy life. None of us here are, however.