A retired FBI agent, Mr. Page, teaches sex crimes in the Florida Police Standards Course (police academy) and would weave his bizarre sense of humor into lectures. "There's a man in Jacksonville who can't get an erection unless there's a blue feather sticking in his ass." Half hour later Page pulls back his suit jacket to reveal a blue feather sticking out of his shirt pocket.

Page is at his lectern one afternoon, "A cop in Daytona was in high speed pursuit when he crashed into a wall. Horrible. Poor bastard was unconscious for months. He came to and was starving but could only mumble, 'Ah ghata eett sompun.' The doc says, "You gotta eat something?" 'Ya!' says the cop. 'But your mouth is wired shut due to the operation.' says the Doc. 'Am starvin!" says the cop. 'Okay' says the doc. 'I guess we could feed you through your rectum.' 'Enethen!' says the cop.

So they set the cop up in bed and raise his posterior. The doc puts a clamp in his ass and winds it open. The doc asks the cop, 'Is there anything you'd like to start with?' Cop says, 'I alwayz lik a cuppa coffee for ah start a meal.' Doc says, 'A cup of coffee?' Cop says, 'Ya.'

I still don't get it. 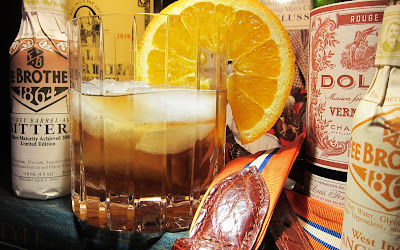 I covered the 'Manhattan' cocktail here in the first Friday Belt. Sazerac rye ($27) and Carpano Antica vermouth ($31) with bitters. Today, thanks to my new economy, we're gonna do a Manhattan for less than half of what we did it for over two years ago. I think it's better. Not too sweet. You with me? Good. 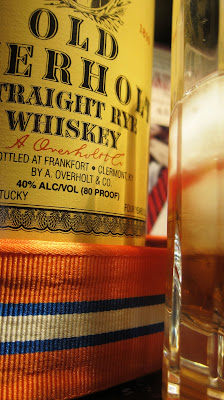 The problem is the vermouth. It's sweet. You need a bone dry rye to remedy that. Old Overholt is about as dry as you'll find. A perfect rye for the Manhattan and cheap as dirt. Between $10 to $15. A bunch of new rye is being heavily marketed and it's insanely overpriced. I suppose to pay for all that marketing. You may be inclined to think these brands are pouring coffee down your... but take comfort -- they'll be found out for what they are. 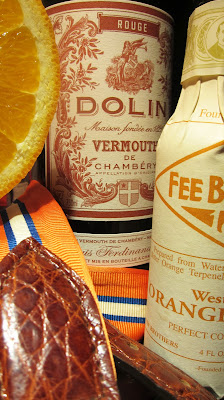 I used Dolin Rouge vermouth for two reasons. It's not sweet at all and it has history. They've been making this stuff with the same recipe since 1821. And while I would not be inclined to drink Overholt straight -- Dolin Rouge is fantastic with a little ice or sipped like a port.

Bitters, while expensive for what they are, last forever. They're the hidden value because they have such an impact on the drink. I used Fee Brothers West Indian Orange and Whiskey Barrel Aged. A shake of each is damned plenty. 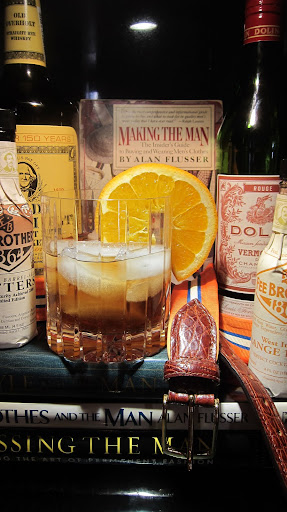 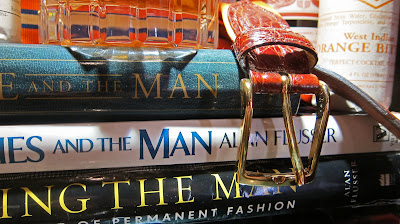 I'm out the door and burning down street when I get more details. Lot's of suits, shirts, socks, belts but no shoes. I get there and am astounded to see some 30 bolts of wool and cotton. The designer snags a beautiful bolt of madras that I'm sure you'll see in Saks SS/2012. Some guy with a strange accent throws on a white linen patch pocket sport jacket with side vents. Fits him like a glove. 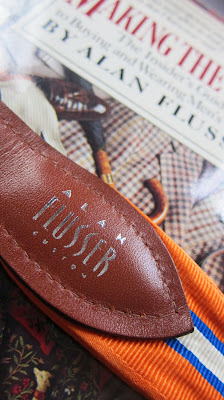 I found a belt. But for me - it's a belt I've coveted ever since I saw it on my first visit to Flusser's shop. I cried about it here in an earlier Friday Belt post. Unable to afford this croc-surcingle master piece when I was flush -- somehow it finds its way back to me when I'm poor. Any hump can parade into Polo or Hilfiger and buy seven of these, 12 of those and slap down the platinum card. But when you find something you loved, but had to walk away from -- and you find it again and make it yours -- You're tempted to wear it everyday.
Posted by tintin at 11:01

Jackie the joke man(Martling) has been telling that joke for years...
Suggestion on Old Overholts is a home run...a good whiskey at a very reasonable price for such applications.
As for bitters....I am just a pedestrian Angostura fan...it too has a history...1824 origin and a secret recipe.

Another point....(besides the one on my cranium)...it is shocking how many barman fail to use any bitters in a Manhattan...and that is lame.

I got the same belt... unfortunately for full freight at Flusser's shop. It's a great one, though.

Dolin is quality stuff. I switched to Dolin Dry after Noilly Prat went and changed its formula. A martini made with the "new" Noilly Prat looks like a chilled urine sample. Dolin dry is a very worthy alternative. Never tried Overholt......I'll pick some up as soon as the Rittenhouse is gone. Oh, good lookin' belt too!

"But when you find something you loved, but had to walk away from -- and you find it again and make it yours -- "

--you know you were meant to have it.

In that guys wallet..not interested- but in your liqour cabinet, your memories and your wardrobe- man now you're cookin' with gas.. have great weekend.
Just had a manhattan at SF's best cocktail spot, BIX, last night..Mm.

Funny, I was wondering when the belt was going to factor in from looking at those photos. Don't get me wrong...beautiful belt. I guess it's best to christen it with booze and fruit acids now, rather than later.

T, you must be new here...welcome.
As the resident non-drinker I had to take this opportunity to say Ieven I get the pun in the Friday belt. Our good host loves the double meaning in just about everything. He's kinda the sartorial version of "that's what she said."

One thing you are paying for when you buy high-priced rye is the deluxe bottle. Some of them are works of art. The rye, not so much different from Old Overholt.

I've been searching for a delicious and affordable rye for some time. In PA, all I could find in terms of rye under $30/bottle was Jim Beam and Wild Turkey - not bad, but nothing amazing. I was in Maryland and picked up a bottle of Old Overholt, having heard of its original PA bona fides (though I believe it's now made in Kentucky). I love the stuff and I'll drink it neat or in a Manhattan or any of the drinks that now substitute bourbon for rye. It's great stuff and I think it was like $12/bottle. Next time I'm down, I'm picking up a case to split with a friend.

It may even give you 'diarrhea', old fish.

Preptard- Love that handle - sounds like a new clothing line from Mark McNairy. Anyway, what goes around comes around. I guess.

Years ago, before OLd Overholt had begun to enjoy it's much deserved resurgence, the liquor store where I worked kept three bottles at a time in stock for a little 90 year old lady from the neighb orhood, who only bought that and Pall Mall non-filter cigarettes...tough old dame, she was. At the time, I was partial to Seagram's V.O. as a whisky cocktail base, Crown Royal if I was feeling frisky.


These days, we've got all these young dudes running around paying North of $40, and as high as $85, for rye whisky to be blended in cocktails. To call it a sucker puch would be gross understatement.I put it down as part of the "Well Curated Authentic Heritage Americana" fetish. These whiskies make a big show of all that sort of marketing, but all the old working guys I ever knew(my mother's father and his boys, concrete masons, bricklayers, carpenters and meat packer, etc...you know, guys who wore work clothes to work.) drank V.O.Canadian or it's American counterpart, SEagram's 7.

I always thought the good thing about rye was that it was drier than Bourbon and much cheaper, imminently more mixable, hence suited for cocktails.

But what do I know? I'm just a cheapskate.