NBC announced yesterday a Mad Men like series this coming Fall called, The Playboy Club. Maybe it'll work. In the interview below actor Eddie Cibrian (Nick Dalton) tells us the series is about the Chicago Playboy Club, "...where life is magic. Where anyone can be anything they want to be."

Hugh Hefner was a great magazine editor but not so great in business. Little known, but far more interesting than Hef is a business man and the real Playboy behind Playboy, Victor Lownes. A marketing genius, Lownes loved telling friends the Playboy Club was for loser salesmen from Ohio. 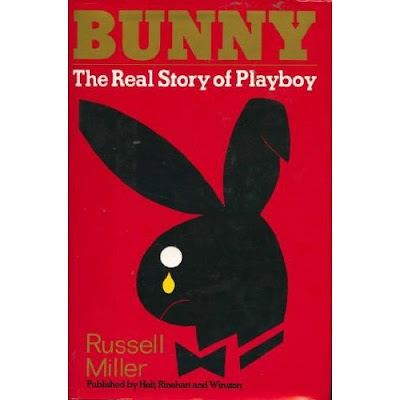 Russell Miller's 1984, Bunny - 'The Real Story of Playboy' is the only book I've found which exposes Lownes and his critical involvement in the company. In short, Lownes is the erudite sophisticate while Hefner is the Midwest rube swilling Pepsi and eating fried chicken and ham sandwiches prepared by gourmet chefs. While reading the book I couldn't help but picture Hefner as Jethro Bodine working on a math problem.

Lownes was with Playboy 26 years before he was fired by Hefner (rare Lownes interview here). Most agree he was canned because centerfold Marilyn Cole preferred his company over Hef's. They married and are still together today. Once Lownes was out; Playboy took a dive. Lownes knew the casinos and clubs were subsiding the magazine. It's not clear whether Hefner knew or, I'm guessing, he would never have let Lownes go. 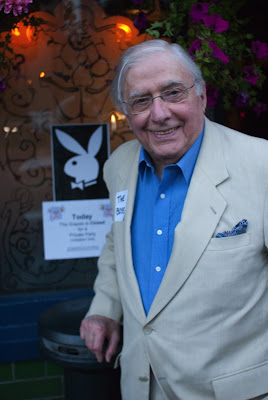 Before being fired Lownes was called to Chicago from London to fix dropping club visitation. Standing in his office overlooking the Drake Hotel, Lownes looked down to the street and saw a commotion of reporters and TV news cameras covering the arrival of a VIP at the hotel. Lownes ran through the Playboy offices collecting women, put them in Bunny costumes and made protest signs, "HEF UNFAIR!" "BUNNYS DATE CUSTOMERS!" "WE WANT TO DATE!"

The Bunnys "picketed" in front of the Playboy building and without much persuasion the press at the Drake turned around and saw their news story. Playboy Bunnys protesting the unfair, "No dating customers" policy of the Playboy clubs. The demonstration hits the six o'clock news and Hefner makes a statement that night allowing Bunnys to date customers. Just in time for the 11 o'clock news. Club visitation soars. Sounds like something Don Draper would do.

And now for something painfully honest...

Another interesting post. Is it HBO or another network has been running a piece on Hefner this week. He certainly doesn't come off as a rube in any sense. With that said, while I would never have been invited to the party, I'm especially glad not to have been there w/ Lenny Bruce & Hef. Stimulating stuff! But the Playboy show on NBC looks good.

I'm guessing sominex wasn't one of the sponsors. That party needed some magic brownies. I remember Playboy after dark. It was "hipper." LOL. I wonder if Lenny nodded off after the taping and then Hef caught Bruce rifling through the pockets of his smoking jacket.

This makes for always-interesting subject matter. I read the Hefner biography and found the first 3/4s or so to be pretty informative, including its assessment of Victor Lownes' role. I think the way to describe Hef's initial attitude towards him would be "man-crush". Much like the publication itself, by the time the biography gets to the 70s and 80s, it's a bore.

And yes I am curious about the upcoming Playboy Club show.

As a barometer of cultural decline, I often refer to Playboy before and after 1980. Really rather shocking actually. And I am referring to the articles here... As for Playboy the organization, I never really forgave them nor Bogdanovich for their tangential role in the Dorothy Stratton matter. Perhaps unfair of me on both counts but there it is.

Sum- Thanks. First A ever.

ann- Playboy has gone to extremes to hide a lot of the bumpkin nature of Hef. He is the image of Playboy in many ways but like so many other false images...Cary Grant who wished he was Cary Grant, etc...Hefner is just one more. A guy who sucked on Pepsi and Pipes nonstop and locked himself away in a bedroom writing on a round bed with a blue feather...Wait! I'm Hugh Hefner!

UncLooney- Lenny Bruce is so boring in this I have to assume he's stone cold sober. But look at Hefner. The, "Hi, I'm Hugh Hefner, editor and publisher of Playboy", one minute. A he-hawing 16 year old the next when Lenny so very suggestively jerks off the champers bottle. I have watched that full head tilt back of Hefners in awe and it confirms what I read in Millers book. Hef knew only one thing. Sex. And for that he needed vibrators. And many of them.

Ben- Back in the early '90s I stumbled into the wrong office on a sales call in Chicago. Somewhere on East Ohio, it turned out to be Playboys second office before they moved to the Colgate Palmolive. Lownes was famous for kicking the elevator door it was so slow. Anyway, I was given the grand tour (even though I was in the wrong office - Is Chicago great or what?) and shown Hefs stereo system still in the wall. The general area of Hefs apartment in the office, etc. Amazing.

Oyster Guy- The problem with authentic "heritage" companies like Playboy is they think they have to dumb everything down for the 18-25 y/o market. Hence, they lose their gravitas and maturity. They're all doing it. LL Bean. Gant. Brooks Bros. J Press. It makes you wonder. Well, it makes me wonder.

The awkwardness of Lenny's ingratiation towards Hefner is almost nerve-wracking. About the only watchable moment is Eleanor Bradley laughing at Lenny uncorking the champagne.