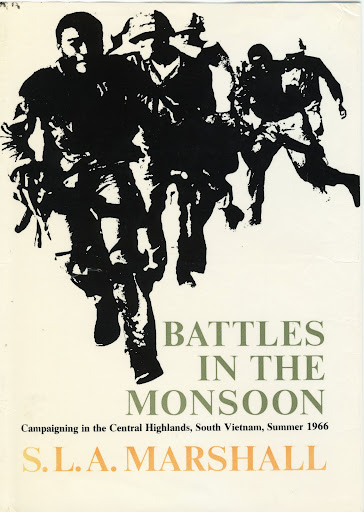 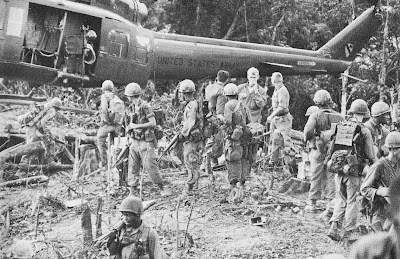 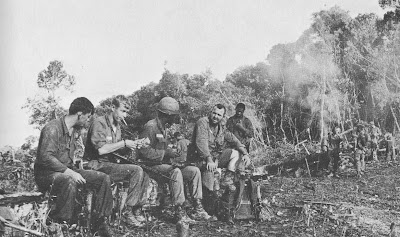 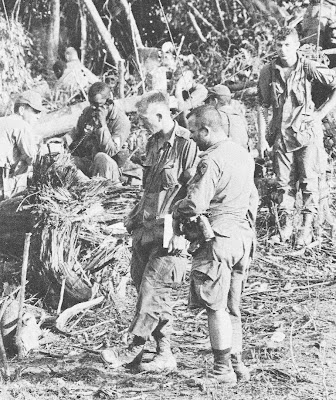 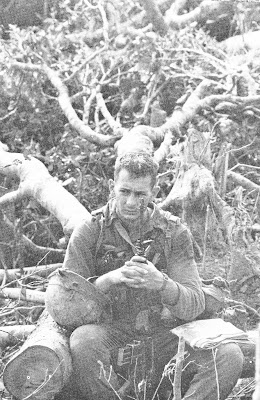 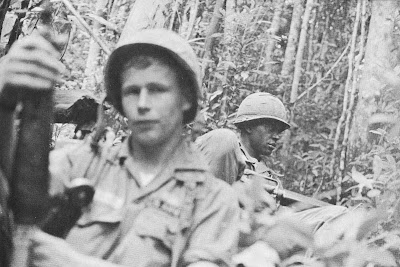 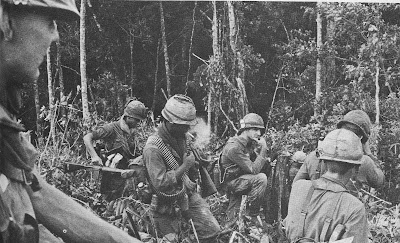 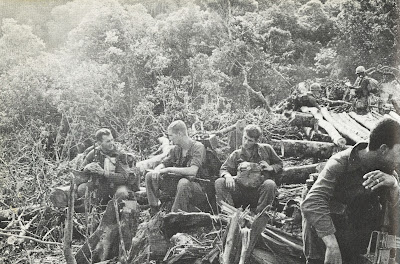 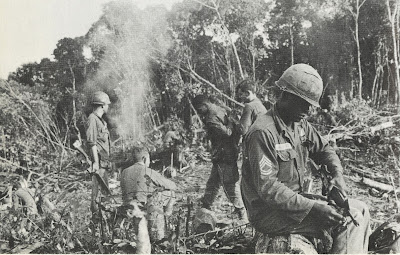 45 years ago Look Magazine senior editor and journalist Sam Castan was killed trying to break out of an ambush that, save two men, wiped out an entire platoon on Hereford Mountain in the Central Highlands of Vietnam. Castan's body was looted of cameras and film only to be recovered from Viet Cong killed in a fight later the same day. These photographs were taken moments before Casten and the men in these pictures were killed.

I grew up staring at the images and wondering about Sam Castan. In many ways I felt like I knew him but it was a romantic image I created. Belted safari jacket. Nikons hanging from his neck. A cigarette dangling from his lips. War photography speaks to me in a terrifying but alluring way.

The photographs were published in S.L.A. Marshall's 1967, 'Battles in the Monsoon.' Castan stayed at my father's Special Forces camp the night before the ambush and remembers the journalist winning at a card game with soldiers of the 1st Air Cavalry and his A Team.

A grand Kowloon hotel. A hedge
of red hibiscus. A tiled pool.
A masseuse who pressed fragrant
oil of almond into my body
in the full heat of the sun.
Elsewhere, northeast of Saigon,
a man beheld you, and fired.

At the undertaker's you were
all made up and your hair
was parted wrong, so I smoothed it
the way you would have liked.
Someone shouted Stop, as if we were
caught making love on the couch
in my father's house. God knows

what they feared. Unfamiliar
streaks in your hair must have paled
at the moment of terror
and grown longer in the time since,
eerie as strands of ticker tape
still printing. Such dark hair
shocked white. How afraid you were.
All I could do was hold you.
Posted by tintin at 13:33

Thank you for this. I was not cognizant of either Castan's work but will be making up for that.

Sam Castan was a most excellent photographer and, technically a noncombatant, died a heroic death with a borrowed pistol in hand in that battle. (So did two of my best VN soldiers and one of my SF who was a close friend.)
The soldiers of the 1st Cav were the best I've ever worked with! (That's a huge compliment from an SF guy.) As far as I'm concerned, every one of them was a true hero. We did all we could to help them. In return, they "saved our SF bacon" on numerous occasions. (Cavalry to the rescue, but better than in the movies.)

I'm not certain, but I believe I read everything Slam Marshall had written by the time I was a high schooler.

A special remembrance of just one soul lost in war. Well done.

Incredible post, for all the reasons I've mentioned before.

These photos really capture a tone and feeling of jungle warriors in their element. Likewise...interesting to learn that the photographer went down with a pistol blazing...literally. Thanks!

A guest appearance from the notorious Trad Dad? How cool!

You go right from a tailor to this? I suppose this is part of your allure right? CLothes and war stories are both part romance, part swagger.
They are both part of the same thing.

Haunting ghostlike pictures.. and that poem.... worth a thousand of them.

Wow - amazing photos, poem and story. I just finished reading "Matterhorn" and am imagining some of that narrative matching up with these photos, especially the one of the helicopter, and, of course, the bored, scared kids.

Thanks for this editorial, and the photos. MY dad (Phil Harrington) knew Castan and worked with him on several assignments at Look Magazine. I've jest recently scanned some photos of Castan from 1961 and wanted to learn more about him, which brought me here.

Thank you, Evan. If you're interested, please feel free to contact me via email. jtinseth@aol Would be interested in sharing some stories. Not to worry if it's an issue. I've found some are not that interested in bringing up this very sad past.

I was the First Cav Public Information Office sergeant that identified Castan's body in a field morgue. Worst night of my life. Two days earlier, I spent almost the whole night (An Khe base camp began taking rocket and mortar fire about 1900 and we ran for a bunker until the attack was over, about 0500 talking to Castan. He was looking for a particular story: wanted to show the effects of one GI death by photographing the GI in life and then following his remains all the way back to burial, shooting pictures of the people the casket encountered. He asked me to set him up with a unit that might see action, and I took him to Charley CO 1/12 Cav, where my friend Paul Harrison (married to my one-time next-door neighbor) was in the mortar platoon. After I identified Castan, I saw Harrison on the next table, dead of multiple gunshots. I was also the one who identified his cameras for military intelligence, and unloaded the film from his cameras that held the images shot on his last few days. For 30 years I blamed myself for both deaths. Finally I tracked down Castan's daughter and got a message to Fran. We met about a year later and I unloaded my guilt on her. She told me, of course, that I was not to blame, and a huge load went off me. I later reviewed SLA Marshall's book (I was his escort, photographer and general factotum when he visited the Cav. He was a fraud and a jerk.

Many, many thanks for posting and for sharing your story of Sam Casten as well as SLA Marshall. My father, who posted here, thought the same about Marshall. I reached out to Casten's daughter but never heard back. I respect that. Before my father passed away, he met with the son of his Ops NCO who was killed the same day as Sam. He also apologized and believed he was responsible. A couple months before Dad died, he told me he thought he had killed all the wrong people.