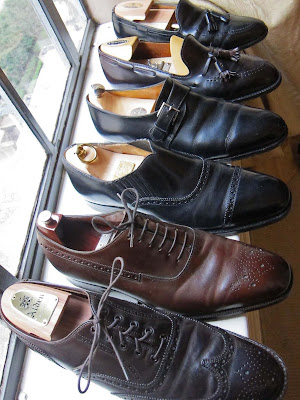 ...was the punch line of a joke I heard in the army but can't remember. Rule eight of shoe care in, Handmade Shoes for Men by Laszlo Vaslo, advises, "If the shoes are not to be worn for an extended period, a thin coating of cream should be applied, a textile bag obtained from the shoemaker, and the shoes placed inside their original box, standing on their soles." I care about my shoes...but not that much.

Despite not creaming, bagging and boxing, my shoes have done pretty well. My only rules are brush shine and shoe trees. Any of those in the window are fine as Selling Shoes. Again, we're not talking personal statement here but a situation where discretion, understatement and local customs are key.

The Brooks Brothers cordovan wing tip in the foreground screams old man or 2o year old hipster. I've mentioned these 25 year old shoes before. They had an overhaul from Alden three years ago and have always been my choice whenever meeting with lawyers. Why? Because they're usually wearing the same shoe. A Brooks salesman I worked with suggested polishing these occasionally with black Kiwi for a deeper cordovan color. It really works.

Next are Purple Label oxfords made by E. Green secured in the Michigan Avenue Polo for half off. They hurt like hell but man do they look good. Consequently, I wear them rarely, briefly and only around magazine editors I pitch stories to. These meetings never last very long.

The side gusseted Poulsen Skones are very much under the radar because they look like normal cap toe shoes until you cross your legs. Keep them a secret... or not. They are the lightest and most comfortable shoes I've ever owned and perfect for standing in the queue at an underwriters box at Lloyd's. Hard to find and expensive when you do but easily worth four pair of Nancy Belgians.

The Monk Strap is from Lobb via the Hermes store in Chicago. Clean, subtle and, I understand from the NYC manager, no longer offered. She thinks it's a classic and one of their better designs -- which is why it's no longer offered. The more I lean about retail, the more I'm convinced it's very much like the army. Popular among side vented museum curators from Nebraska who picked up English accents after a year in London. 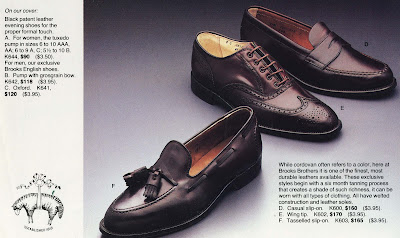 The Alden Tassel, or slipper, as they call it in Europe, is the most versatile shoe you can own. You can wear it with anything. Suits, khakis, cords, shorts, even pajamas. They go anywhere and only offend those few who unfairly associate them with northeastern, repp tie, Mercedes station wagon, Ritz cracker, crackers. The Brooks catalog is from 1985. Mine are from 2001. Best worn with terry cloth bathrobe while being interrogated by security in Drake Hotel lobby after halon fire extinguisher is discharged in your room by drunken friends.

The last pair are black calf Allen Edmonds. The last is less clunky than the Alden/Brooks and cheaper too. AE also offers rehab for troubled shoes. How these guys make a shoe in the US for the price they do is a mystery to me. You could do a whole lot worse and most men do thinking AE's are for granddad.

Worn to 1985 job interview with gray suit, white shirt, Courchevel tie and knock off Burberry trench. Was introduced to the receptionist, "This is Carol. She did undergrad at Yale, speaks fluent French and is working on her master's dissertation at Columbia. Where did you say you went to school?"
Posted by tintin at 13:27

Allen Edmonds. Inherited a collection from my grandfather, all mint condition.

Don't know that he creamed them, but wearing them has led to several opportunities.

slipping self depreciating stories into a post about slip-ons and wing-tips is first rate. SLipping in a cracker reff is even better.

Once again, much like madras, you have shown me another way in which I simply cannot be a trad. I cannot bring myself to wear a shoe with tassles on it. I just can not do it.

Ritz cracker crackers? You're killing it with these selling posts; my favorite in a while. No gray shoes leftover from your time following the local customs here in Philly?

I'm a big fan of those Lobb monk straps. Unfortunately, I don't exactly travel in the rarefied air of Lobb owners, but you're right about the quality and reasonable price of Allen Edmonds shoes. I have two pairs of black Allen Edmonds "Park Avenue" cap-toes that I rotate daily. And they're the epitome of boring. No embellishment or detail whatsoever. Dare I say Tradly? But they are well made, comfortable, shine up really well, and made in America. I'm jonesing for the AE "Strand" cap-toes in walnut calf next.

Where you get the Poulsen Skones from? New and Lingwood? Unfortunately shoe ownership has assumed Imelda Marco proportions with me. My bride say's I'm going to be buried with them but then there wouldn't be space for me in the box. The Alden tasselled loafer is nice but the most elegant K street shape has to be the Church's who are the main source of my footwear some of it 35years old and with a patina to die for. You've got to cream/kiwi calf imo but cordovan is better just brushed and then it fades over time to give a great patina. I'm into patina on shoes and furniture.

Bro- Tassels are like grits and country ham. It helps to be introduced at a young age.

Neil- Buddy of mine from Philly wore gray shoes with his gray suit. And I almost forgot those 'tone on tone' white shirts. I think you can still find 'em at Boyds.

Brumm Joe- I picked those up at the Chicago Dunhill from Roger before he left for Polo. They came with a free cigar.

I loved Churchs but since Prada bought 'em the quality has come down. I still have the Church's cap toes I was married in which is where that last is from on the 2nd to last tassel. The trees did a lot better than the shoes.

"I loved Churchs but since Prada bought 'em the quality has come down."

I've heard this said but I think it's a bit of an urban myth. They're still made by the same people in the same VERY Northamptonshire factory. They introduced new last shapes for some of the classics but even that didn't last long before they went back to the trad lasts. What has changed is the prices which in constant dollars are probably up around 50%.

Brumm JOe- Yeah, the pricing is outrageous. C&J are the better deal in my mind. I have their boots and love 'em. In the NYC Church's store they have these very polished, almost Corfam looking, finishes. I thought they were corrected grain but have been told they're not. Still, it's a finish I'm not fond of. I like patina on furniture as well. But not shiny and polished.

Mainly sound and illuminating as ever, Trad, but I must part company with you on two points. My father taught me never to trust a man with elastic in his footwear and that monk shoes, while not exactly of themselves impugning the trustworthiness of their wearer, were better left to Lebanese gentlemen.

Experience has convinced me that my father's judgement was accurate; certainly I would be asked to leave at least one of my London clubs if I tipped up in monks.

I hate to say this, but I agree with Crap.

A propos des bottes, no one who has been introduced to me, or who has claimed to be 'fluent in French',in my experience ever is. I interviewed loads of them in the 1990s when I worked for Veolia and Thales and it was always, always bullshit. I'm bilingual.

Crap- Truth be told, I thought I was on the outside with both the Monk and the gusset but didn't have access to the cap toes and needed to fill the ledge. Still, I see Monks all over London and there's a lot of Time, Place and Occasion here. I'm not wearing in Ft Wayne what's every day in Manhattan and certainly not vice versa.

Clod - No need to hate what you say. You could be Unashamedly Clod.

Your good taste is only matched by your acuity, as ever.

How naive of me to think it was only women who suffered through painful shoes. (I have stubbornly refused to submit to that rule.) I thought pain meant a poor fit, but, no? Pity the Purple Label Edward Green's hurt because they look mighty fine.

"certainly I would be asked to leave at least one of my London clubs if I tipped up in monks."

Obviously I belong to the wrong clubs. I'd also add that I worked for a Brit for a long time, titled, very wealthy, a member of some of London's grandest, and he seldom wore anything other than monkstraps. Perhaps it was because he was a Francophile.