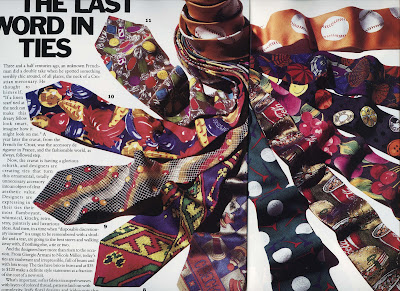 The early '90s (when most of you were 10) were a bizarre time for ties. It reminded me of the '40s where ties were hand painted in some vulgar theme and worn 3 inches above the waistband. I figure those '40s designers - all from LA no doubt - came out of retirement in 1990 and took one last shit shot at cranking out some of the butt-ugliest ties in cravat history. 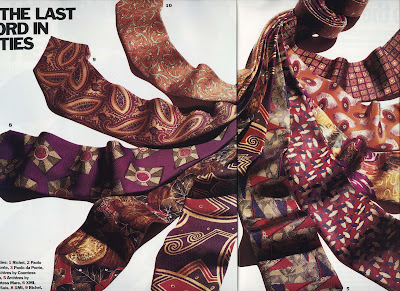 The ties dove tailed nicely with suiting from, Balzac, Verri Boutique, Armani (Le Collezione), Comme des Garcons and baggy polyester trousers from New York Uomo. Hugo Boss (not so well known for designing Third Reich uniforms) was all the rage and my assistant asked me why, at my age, I dressed like it was still 1985. 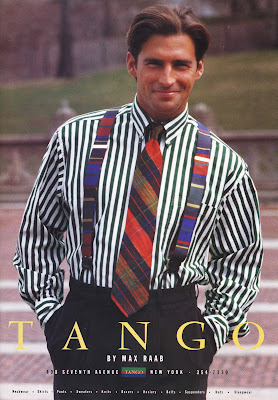 I thought myself vindicated when I saw these ads in the June 1991 issue of M Inc. Tango by Max Raab (more about Raab, Pasha of Prep, this week) spoke to a conservative style that mixed color of the '90s with cut and design more associated with the '80s and the early to mid '60s. It was a slap in the face to clothing names ending in a vowel. It was also the last shout of Ivy for almost 20 years. 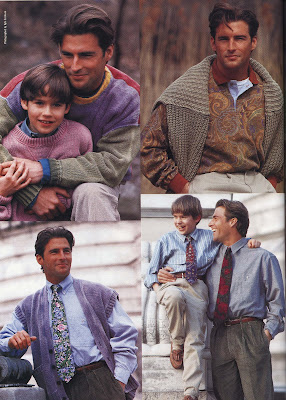 When Timothy Busfield was a fashion icon

I remember the 90s very well. I was wearing navy blue power suits and experimenting with Versace-equse scarves...

By the way, isn't that Steve Santagati (he of The Manual fame/infamy) in the Raab advertisements?

Bad ties 3 inches above the belt-line...reminds me of a Robert Mitchum movie scene...or Dana Andrews earlier than that...never could fathom that presentation.

I recall as a young deacon, sorta like an altar boy, me and the other guys were scolded by the bishop for our weekly ugly tie contest. He was tired of us displaying on our chests the prizes we found in the back of dad's closet for the whole congregation to see.
It was late 80's, he didn't like us looking like the mid 70's.

Many English people have no problem with 'clothing names' ending with the vowel 'o': (Pakeman) Catto (and Carter), Graziano (and Girling), (Ralph Lauren) Polo,Sebago,or even with the vowel 'e': Loake, Lacoste, Roode, Fulke, (Black) Fleece, (Born and) Rose etc.. 'a', 'u' and 'i' are, admittedly, infinitely less acceptable and 'y' is a whole debate in itself (Sperry!) So possibly best to steer clear of the dubious politics of alphabetical fashion and just celebrate the ineffable naffness of those pleats.

Tom Wolfe referred to those 90s style cravats as "Pizza Explosion" ties. I owned a couple from Jerry Garcia and from Tabasco, I'm not sure now which one was the fugliest.