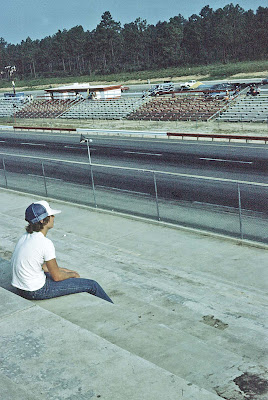 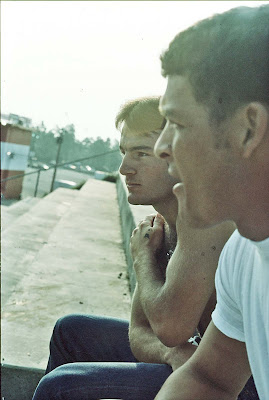 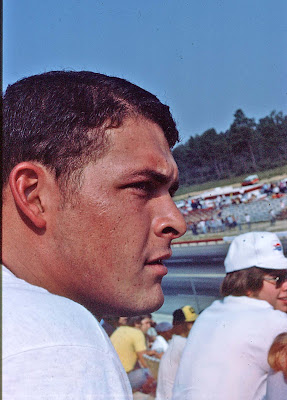 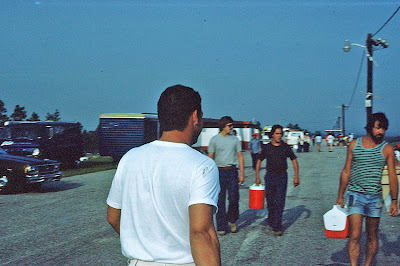 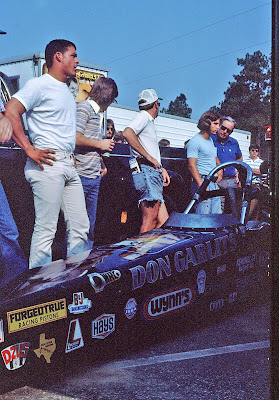 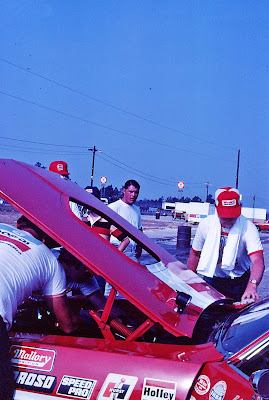 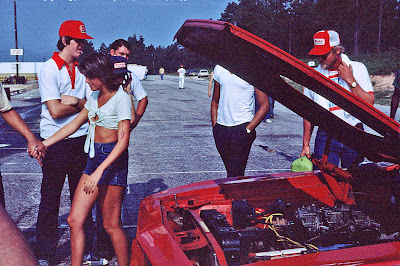 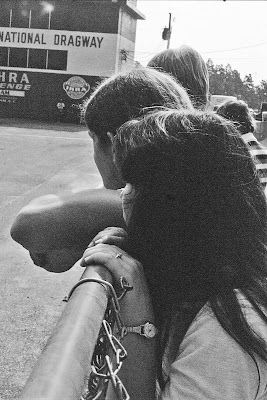 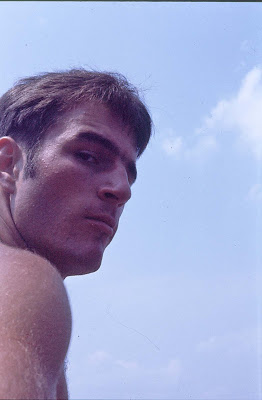 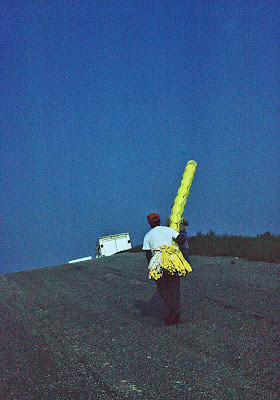 The Summer of 1977, I rode along to Rockingham, NC with two army buddies, Bob and Jim. They were really into drag racing. I had a new Yashica Electro 35mm which set me back a half month's pay at the Ft Bragg PX. It was hot and loud and I complained a lot. It would appear I was also underexposed.
Posted by tintin at 09:03

The Rock...not as good as it was, better than it will be.

Your photographic compositions - these and others - are striking in their simplicity. I figured the overexposure was an intentional choice, much as I've been seeing in a number of magazine ads with blown highlights.

Rockingham appears to be a long way from Gramercy Tavern, no? Life really is very interesting. Great pictures from an otherwise miserable looking day.

Tell us more about the young lady with the loosely tied halter top and the bayonet scar on her forearm.

Ah, "Big Daddy Don Garlits"...there's a bit of 70s style trad. I can still hear the radio commercials "This Sunday..Sunday..Sunday!"

BKG- Haven't been back since '77 but I'll take your word for it.

Sluice- Any over or under exposure was a mistake. If I printed on Agfa 6 ( a very high contrast paper), it was only my cheap effort at making a screw up seem intentional. I was young and usually drinking beer in the darkroom.

L Wing- A long way from Gramarcy Tavern? 8-9 hours I reckon depending on how bad traffic is in DC on I-95. A life time away in other repsects. God knows how we wind up where we wind up.

Big Daddy Man- She's a mystery. I remember her walking by while I was trying to get a shot of Bob and I just followed her and took the pic. Weeks later (it took me forever to get film developed) I saw the scar when the image was projected on a wall.

There's a lot going on. The top for sure but also the hands with the long nails. The ring. Was she married? A pretty girl who could be older or younger than she appeared. She did cause a stir when she walked by and every man in the frame turned and watched her as she walked away. That was the shot to get. But as always, I wasn't thinking beyond my guns.

Jon- Bob was a huge fan of Garlits. I remember that. I also remember not knowing who Garlits was. AFter the race, both Jim and Bob rushed to the fence to take the race / advertising posters down for the barracks. I would have easily forgotten this day were it not for these slides.

Sometimes I can't remember what old friends look like. But I'll remember how they looked in a photograph. A photo I may or may not have. I wonder how odd that is?

One more thing - I'm thinking how the army and barracks life exposed me to people I would never have met. I'm pretty sure I would have never pal'ed around with Jim and Bob but despite our differences they were great friends.

Jim kept two boas and a python in the barracks that were our companies "unit mascots." We'd go to a feed store in Fayettville and buy baby chickens and later bunnies to feed the snakes. Which we'd watch while drinking beer. That was as odd to me then as it may be to you now but I'll never forget it.

You get to know people you have nothing in common with and yet you get along. Sometimes very well. Home boys from Baltimore. Puerto Ricans from NYC. Red Necks from West Virgina. Surfers and Chicanos from L.A. I lived with them for four years.

I remember the army fondly and not for the infantry airborne, hoo hah, bobble and medal experience but for the friends I met and still have.

Whew, I can just feel the grit on the back of my neck in these shots! Once again, some portfolio worthy stuff. Some would even work well in black and white. And again, a period in time "lost to history," a period not covered much in 35mm.

Actually, I don't really miss the shot at all of everyone looking at the girl, because the one we see is the one you got, and I like it. There's a lot of movement there.

DB- You're gonna have to help 'cause I can't edit to save my life. I think this blog is a good example.

these are great, keep them coming.
foster

Who is that hubba hubba in the picture second from bottom? Yowsa. ;-)

Foster- I'll try. I think I need to edit more.

Tickeled P&G- That's Jim and oddly enough he was from Texas. Houston I think. I lost track of Jim (and his snakes) in the 80's. I'm pretty sure he drove a Pontiac Firebird Formula. I'm positive he turned me onto Rain X.

I grew up going to the Thompson Speedway, my Dad was/is a huge race car fan. My Mom met Paul Newman there. They were fun times, you captured it all with this great post.

no needs to edit. in my humble opinion, ever image in the post should be there.
foster

I have had equally good times (though not equally good food) at Gramercy Tavern and Rockingham (where the matron of the family who sold it to a publicly traded firm let me drive my rental car on the track after a business meeting).

FYI, John Coltrane is from just down the road in Hamlet, NC, as is Tom Wicker, the late (I think) Pulitzer Prize winning NY Times writer.

Thanks for the flashback to mid-sixties AM radio.

Interesting thing about nostalgia is that it's always there for you, always easily referenced & accessible from even someone else's memory bank. Thanks Trad.
Flatland