A Man's Movie: OC and Stiggs 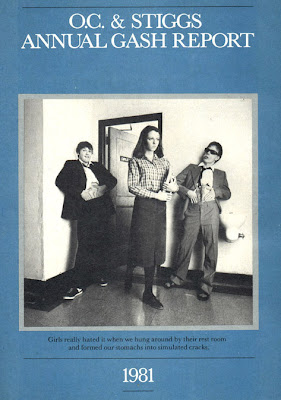 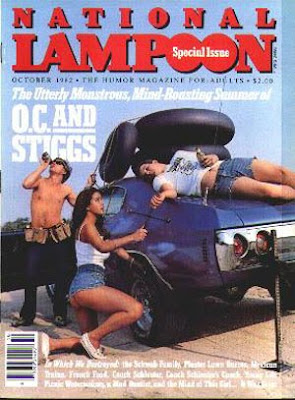 "If we could combine really loud noise with the ugliness of poverty, we'd have the ideal car." Mark Stiggs

Shelved in 1984 and released direct to video in 1987, Robert Altman took a lotta criticism for this and that's a shame because no one ever saw it. Wildly confusing on first viewing, it veers every damned where. It pokes fun at just about everything 'middle-class-white-watusi' including insurance agent, Randall Schwabb, whose company motto is, "Misery loves our company." It's totally unpredictable and maybe that's why women hate it. Safe and sound is put to the test through the insanity of this film.

A college buddy, Jeff, introduced me to O.C. and Stiggs via National Lampoon Magazine. There were a number of different stories but, "The O.C. and Stiggs Guaranteed Method of Porking the Vice President's Wife" in the June 'Do It Yourself' issue of 1982, gives you a taste for the concept.

Jeff had a movie poster in his dorm room for the obscure underground hard core film, "Cafe Flesh" with the sub title: "Post Nuke thrill seekers looking for a kick." After dumping Jeff, his ex girlfriend tried to make nice at a college dance and asked if he would like to dance. Jeff replied. "On your grave."

Jeff found a 1961 Lincoln Continental for $500. Five of us were going to split the cost but a $1,500 exhaust system would be needed for the car to pass state inspection. Our dream of living a scene from O.C. and Stiggs, "Utterly Monstrous, Mind Roasting Summer" (Oct 1982) was not worth $400 each.

Riding in a friend's Mustang convertible, Jeff found it impossible not to sit on top of the back seat and wave. 25 years later he's still certifiable. When I introduced him to a business colleague a few years ago over lunch - the unsuspecting underwriter asked, "So what do you do?" Jeff deadpanned, "I work in the adult film business." Never invite old college friends to business lunches.

This cast is pretty damned amazing. Tina Louise, Cynthia Nixon, Jane Curtin, Ray Walston, Dennis Hopper, Lois Nye, Melvin Van Peebles, Bob Uecker, John Cryer and Martin Mull in one of the most bizarre roles and yet he's pitch perfect... like it was written for him. King Sunny Ade rounds the whole thing out (and is a major plot point) with an amazing soundtrack. Hey, is it true Ade's US tour has been cancelled?

Look, I'm not gonna BS you -- This film is an acquired taste. But just like Tripe, try it 10 or 20 times and you may find it grows on you.

Labels: A Man's Movie, O.C. and Stiggs, The Best

Glad to see you resurrect the memory of these two, who predated - and outdid - Bill & Ted (of Excellent Adventure fame) by almost a decade. As I previously suggested, this movie was unable to live up to the canon created by National Lampoon, but it was still nice to see them on home video. I guess the producers didn't think flushing lobsters down hotel toilets and mercilessly torturing The Schwab would translate into a Porky's-style franchise.

I'm going to search for old issues of Lampoon on eBay now.

Your taste, as always, is unassailable.

The cinematic progenitor of Harold and Kumar or possibly Dude, Where's My Car? among others.

I bought few, if any issues, of National Lampoon, but I had this one and remember it well.

This is totally new to me and on some primeval reptile level it looks appealing. Definitely. I say this as a past P.G. O'Rourke fan. What does G. Foxtrot think of this?

Many a beer fueled laugh with OC & Stiggs on my Freshman hall at Lehigh...those issues of National Lampoon are classic....now if I could only get my hands on the National Lampoon Kefauver High Yearbook edition.....

Ben- Certainly the stories in Lampoon were gold and told, no surprise here, in the same style as The Harvard Lampoon. But the film is a hodge podge of intelligent skits best suited, I think, to stand on their own.

The Bob Uecker scene is amazing, hysterical and baffling but it works. As Jeff likes to say, "If it doesn't totally surprise me - it ain't funny.

Anon- The early 80's seemed to be the last hurrah for Nat Lamp. I don't remember reading it all after college. I'm trying to remember which issue had the "Blind Wife Tasting." Anyone?

LBT- The Foxtrot hates it. With a passion. Past tense for O'Rourke? I like him still. His summary of the 70's Nat Lamp staff of writers, mostly Jews and Irish Catholics, hit home. The Jews loved the self deprecating humor while the Irish Catholics loved taking aim at everyone else. A match made in heaven.

Main Line- Was that the 1964 yearbook? That was hysterical. I still remember the Driver's Ed photo funny.

Stew- I'm getting the hang of tripe but not enough to ask for seconds. I've seen this at least 30 times over 20 years so if you need anything translated let me know.

I would give this a try. Wonder if I can request it through interlibrary loan?

Cathleen- It's worth a try. I was thinking how this film makes a lotta sense coming from Altman. He just took the 80's teenage movie and did a MASH/Nashville number on it.

I had the Kefauver High Yearbook, but my mother probably disposed of it ages ago. Then again, it might be hiding in a box tucked away in my parents' attic....

The highlights I remember are the cover (cheerleaders, with backs to the camera, spinning so that their skirts flare out, and one of them has no panties) and the single page of Freshman photos--the whole freshman class squeezed onto one page. The first one was "A. Baum." Read the book carefully and you find his first name is "Adam."

Thanks for the memories, tintin.