The Most Fun You Can Have With Your Smoking Jacket On 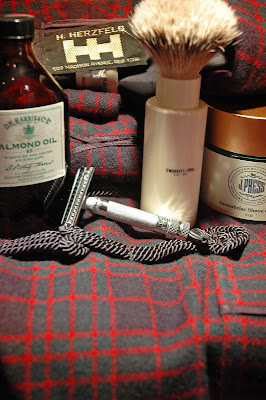 I've smoked everything. Lucky and Camel cigarettes. 1Q pipe tobacco by Lane. The Cuban Punch Punch and the 1926 Padron. No more. The consumption of tobacco came to a screeching halt when the Doc found something on the lip. All is well but for a few months there was a great deal of reflection on the leaf and nothing has ever had the effect on me like a doctor saying, "...it may be cancerous." It wasn't but it was enough to quit. All of it.
So in smoking's place -- I've consumed myself with something else to do in a smoking jacket. Shaving. So far I've tried razor blades made by Astra, Feather, Shark, 7A.M., Sharp, Merkur and Derby. They're cheap. No more than $2 for five and they come in the most amazing and colorful packaging. Just like European cigarettes.
I was happy to use my Santa Maria shaving cream in a can ($25) and even happier to buy it from Phoebe Cates at Blue Tree. Her shop's web site is here and be sure to watch the film clip on the home page. Funny stuff with Kevin Kline. I had been to the shop a couple of times without a Phoebe sighting. My luck, the one time she was there I had Kim Chi for lunch.
While Santa Maria is good stuff and lasts for donkey years...I swear I get a year out of a can...it doesn't come close to lather spread on with a badger brush. The luxury of this is hard to describe. Let me try. While I was in the Army, I spent a week in the jungles of Panama without a shower save getting rained on almost every day. I had an itching jungle 'crud' everywhere and I wanted two things. A woman with very long finger nails to scratch my feet and a hot shower. Back at Ft Sherman, I did get a hot shower and I'll never forget that feeling of being reborn as hot water washed off seven days of jungle funk. Slathering warm lather on your face with a badger brush comes very close to that -- without having to endure the jungle part.
I strongly advise against slapping cologne on after shaving. The slow and careful shave with a heavy safety razor is a radical difference from the plastic Quarto razor that vibrates and the blue - green gel that smells like a J Crew store in an outlet mall (what is that smell?). I like to use what's known as skin food. Trumper's makes a nice lime and coral skin food I've tried but I really like the glass bottle D.R. Harris comes in. It's also cheaper.
After skin food comes cologne. I want to explain how I feel about men who smell like a perfume counter on the street. It's not attractive and I associate it with men who wear lots of Gucci, a black t shirt with a closed vent sport coat and affect an Italian accent even though they're from Ft Wayne, Indiana. I'm not saying you can't. I'm saying you shouldn't. For me, cologne that wears off quickly is A-Okay in my book. The scent is just for me. Perhaps the last bit of pleasure I treat myself to before going out into the world of pissed off clients, homicidal bus drivers and odors wafting through the 59th Street subway station. Odors so bad --I don't even want to know where they come from.
By the way, Herzfeld cognoscenti may be smiling at the label with the old 509 Madison Avenue address. That's where the shop opened in 1949. It moved to 507 Madison in 1984 and then to 118 E 57th in 2005. Great history, a wonderful staff and a beautiful tailor's ruler they refuse to sell me.
Posted by tintin at 10:48

I've always been perplexed over what those outlet J.Crews smelled like...thanks for cracking the case.

I've never used a badger brush...they're at least fifty bucks and I'm too cheap to get one. However, I do use a boar brush and can attest to the fact that there isn't a better way to shave. I use products from "The Art of Shaving." The first thing I do AFTER I shower, is place a steaming hot wash cloth on the face to wet the beard. Then I place some sort of a prep gel from that company to ready the beard. I follow it with another hot cloth. I then wet the razor (Atra) and the brush and place a finger-tip size of cream from the "Art of Shaving" in the middle of the brush's bristles. I lather up three times with that amount of cream. I use the razor with the beard's grain, against the grain, and then diagonally. I then use some sort of a Vitamin infused cream from the "Art of Shaving" to soothe and replenish the skin. I never put cologne or aftershave directly onto the face because the alcohol it contains isn't good for the skin. Finally, I use a sandalwood cologne on my wrists and place a small amount on my neck's pressure points. I get the best shave's I've ever had shaving this way.

Great photo - very gentlemanly tableau. My Trac II razor and can of Edge gel wouldn't be nearly so photogenic--Aaron

Long time reader but first post...like many here I've always just sat back and enjoyed your witty rhetoric without too much interjection on my own behalf. But your post made me realize how wonderful a nice shaving package would be for my father for Xmas. Not looking to spend over $40-50...what would be the best you recommend in terms of brush, (perhaps badger brush would be too costly?) cream, razor, and blades? My father does love the simple straight blades...so no transition period needed.

Thanks again for a great blog, truly one of the best out there.

LJS- Flattery will get you everywhere - - or at least a beautiful badger brush from Taylor seen here for $42. Quick, before he runs out:

BTW, I have nothing to do with the seller. I'd grab one for myself but I already have two.

Luke-
Will go into some detail tonight for you. Look around ebay for NEW stuff. Especially brushes. I wouldn't want to buy used when it comes to shaving kit.

Tin-shun ... you have way too many cologne(s). Any man with that much foo foo juice in the medicine cabinet has some kind of glandular problem.

Tintin,
Glad to hear you gave up the evil weed before it was too late. Cancer has taken its toll on my family. It takes no prisoners and doesn't care how young or old you are. D

Very happy you got off the "leaf," Tintin. My mother-in-law did, and now she hoists the "grape" every afternoon.

I've been using - gasp! - an electric razor for 20 years. Never looked back. No more cuts to the neck. But a female friend once said there's nothing like watching a man standing at the mirror shaving with cream. I never forgot that, for some reason. Maybe because, sadly, I don't personally know any women who'd ever watch a man doing anything masculine.

I've been shaving with an authentic, heavy-duty safety razor since I was 19 years old. Other razors just can't compete. DR Harris shaving cream before the razor, Trumper's sandalwood scented skin food after. Can't beat it. I get most of my stuff from www.leesrazors.com but Art of Shaving is nice if you need a physical store.

I only wear Santa Maria's Honeysuckle + get stopped in airports by people asking what it is because they love it. Men + women.

sweetheart what's the Almond oil for?

Another Hai Karate reference. ADG is beginning to worry me...

With you on the cologne - should always be worn as though you stepped through an ever so light mist across your shoulders hours before.

all right sweet pants, I went to Bigelow and got harri's skin food...30.00! ( i was too embarassed to say put it back)
Got any cheap recs for aftershave balms, sunshine?

I use a Merkur razor with a Rooney brush. For blades I use Persona Reds. I alternate my soap but stick mostly with Tabac but sometimes Mitchell's wool fat soap. And for an aftershave, I just use Nivea - cheap!

DB- I think most women today prefer to see women doing something masculine.

D- It seems the shit is everywhere.

Anon 15:39 - The Trumpers skin food is good stuff. Seems to last forever so it's well worth the price of admission.

tailortaste- The Santa Maria stuff is amazing but confusing. There's so much of it that it's hard to focus on any one thing. I will give your honeysuckle a try.

Blushing- I'm not into the "Queer Eye for the Straight Guy" spritz the cologne in the air and walk through it kind of thing. One- none of my colognes spritz. Two- I like to use a scent that is gone before lunch. Three- I wanna produce a show called, "Straight Eye for the Queer Guy"

anon 14:00 That bottle of DR Harris will last you a long time. Probably a year if you don't bathe in it.

caswell massey no. 6 shave balm is by far the most soothing thing i have used.

actually, no. If you read about the the technique, take your time when you're learning until you get it down, you shouldn't have a problem with cutting yourself. The shave you end up with is very nice. You'll have less skin problems too.

Just came across your site, and added it to my RSS. Great post. I agree with your comments, particularly on cologne. Thanks!

anon 10:46- I like the Caswell Massey Greenbriar balm. Oddly enough, it will be discontinued which is why it's on sale at the NYC store for $11 a bottle. It has been $24. And it lasts a loooong time.


Anon 18:05- When I lived in Chicago I would splurge, maybe 3x a year, on a shave at Truefitt and Hill. I asked my barber about using a straight razor. Now, I've been going to this same guy at T&H for 14 years and he told me I was outta my mind. He then went into great detail about how long it took him to learn how to use a straight razor without cutting a face up. You may have picked it up quickly but my Dad will tell you...I'm a clutz.

Luke- How did you find me? Thanks for commenting.