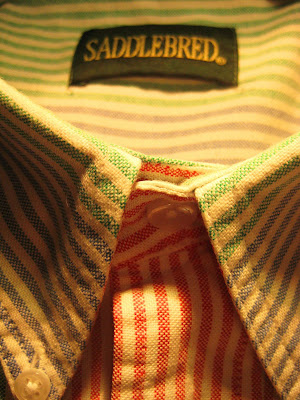 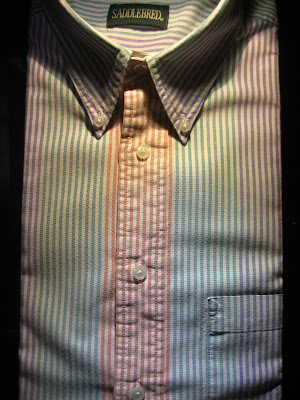 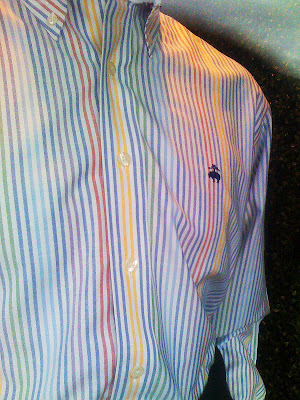 The top two images are of a shirt I found in a Florida thrift store a couple of weeks after seeing Mr. Davis. It was $2. I found the RN number on the tag (31104) and entered it into a data bank that tracks apparel manufactures located here. It came back as a Belk product. It's not exactly what I had in mind... but what do want for two bucks?
Oddly enough, the third picture is also a University Stripe Oxford seen in a Brooks Brothers window on West Broadway. Better seen here, it's an imported, no iron, S,M,L,XL sized oxford for $79.50. By the way, that blue sheep looks cheap. Had I gone with Tom? A Made to Measure in the Heritage 100% cotton (ironing required) would have run me $130.
I still like the idea of a panel stripe shirt. And I like the idea of ordering it from Mr. Davis. That tells me something I think retailers overlook. The importance of a domestic made product with historical provenance sold by a sophisticated professional in an appropriate setting. Is that so hard?
Posted by tintin at 11:33

Chaps made this shirt in the mid- to late-80s. The pinstripes were a little too hyperbolic though. The chest was also devoid of logo. Pinpoint oxford, I think.

Ended up using it as a post-coital cleanup. How merry.

It's a shame your made to measure never materialized. $130 is a small price to pay for the physical manifestation of your design...

There's a Black Fleece fun shirt on sale right now for like $87 on the BB website. I nearly pulled the trigger the other day, but even after my 15% discount it was still going to top out at a little over $100 dollars.