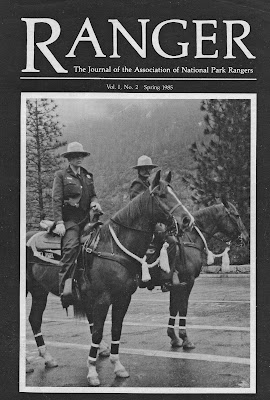 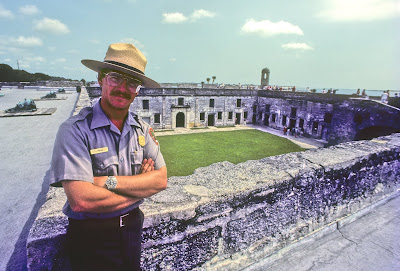 That had to hurt.

100% Arnvil Rayon. At the end of a summer day on that gun deck my BO could knock a buzzard off a shit wagon.

Did you ever have the urge to drop anyone while on duty?

Anyway, IF that is you in that photo, I assure you I will not use it to market you at BH in the future... like a Huffman Koos commercial...

i am sure canadian mounties have similar 'realities'

Side note, just about all 'mounted' units of all 'services' have about a 200 year long waiting list for white males.

Does that name tag say "Tin Tin?"
How'd you pull that off?

The Sub looking great as always

Is there any fun at all in being a ranger? Every one I've met lately seems to be miserable, and it comes across in their interaction with the public. Of course "the public" is a stupid, miserable lot indeed, and I'd be miserable interacting with them too.

If only we could limit access to National Parks to those who have done the preparatory reading...

Very funny - yes, the fantasy vs. reality thing can be a nuisance.

But, you were very cute and it makes a fine memory.

The uniform is one thing...you had no choice in the matter...but what about the glasses?

The place reminds me of George's Island, in the Boston harbor. Looks cool.

Huffman Koos...Oy. That stung.What a visual that created for me. Glad it only lasted a nano. Blushing is tearing your ass up Tinray.

Rayon-man that stuff had to be oppressive. I'm not trying to be funny here ... were you allowed to wear shorts when you were assigned to a tropical destination like Florida? I'm channeling kind of a Jane Hathaway Beverly Hillbillies Bird Watcher uniform.

You look much older in the fort photo - the hat/stache/glasses combo. Interesting idea though - fantasy vs reality.

marty lane- While working the fee booth, I could hear a guy in line bitching that he had to pay to get in and that he shouldn't have to because he paid his taxes and he paid a lot. I looked down the line and saw him. Alligator loafers, Gucci belt, a linen shirt open to navel with a nice looking blonde. When he got to the window and threw a dollar at me (the entry fee was .25 cents) I told him not to sweat it. He looked at me as I slid the dollar back to him and said, "I heard you complaining about the cost and so I'll cover you since you may have trouble coming up with the fifty cents." We dropped people in subtle ways.

Blushing- That is me and I never thought of Koos as a place to get furniture but it makes sense.

Victorian Dance Hall- Without a doubt. Do you like Jamaican Dancehall?

Anon 14:19 Check out the US Park Police. I don't think you have to wait long for a horse there.

Drake- I'd tell you if I knew.

Scott- I know what you mean. A visitor from Japan asked me how to get to I-95. A visitor within ear shot yelled, "Y'all didn't have no problems finding Pearl Harbor!" Now there's a guy who could write for Gawker. It was a great job. And the public always surprised me. Certainly with being rude, ill informed and just plain crazy. But there were always amazing people who showed an interest, knew a lot more than I did and exhibited manners and grace.

Giuseppe- Those are birth control glasses.

But notice who in the photos is smiling, and who is not...

re: the conversation with Scott

i'm reminded of that line from "pee-wee's big adventure"; "there's no basement in the alamo".

i don't know, maybe it's just me, but if i could be a park ranger in a locale such as the one in the image above, i think i could really enjoy it.

TinTin,
You have to admit that the view from your "office' was great! ME

TinTin,
You have to admit that the view from your "office' was great! ME

Looks very much like the National Park at the Dry Tortugas near Key West. Where Samuel Mudd was imprisoned after setting John Wilkes Booth's leg after he assassinated Lincoln. Beautiful Park/small island.

Tin Tin, did you ever do a stint at the Kokanee Glacier Ranger Station? You bear a striking resemblance to the Kokanee Ranger.

I love Castillo de San Marco and St. Augustine. I was there in early March and thoroughly enjoyed myself. There's nothing like St. Augustine in the winter!

seems like you were wearing a Rolex Submariner no date back in the day. Very nice. Do you still have it?