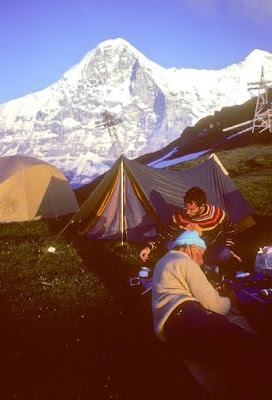 Bell-Ah-Monte (in the cool sweater) & The Eiger 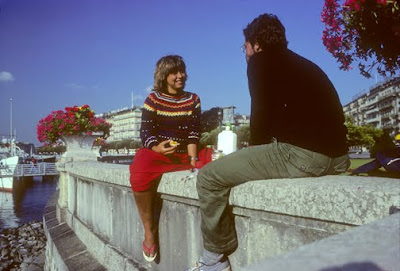 Bell-Ah-Monte and ...Hey! How did she get the sweater? 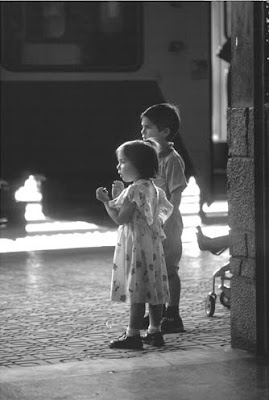 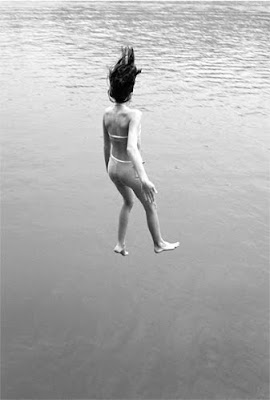 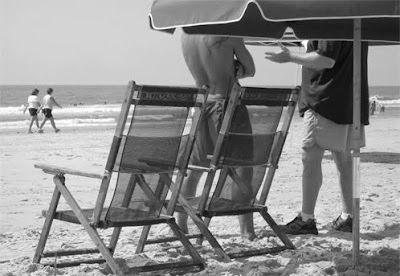 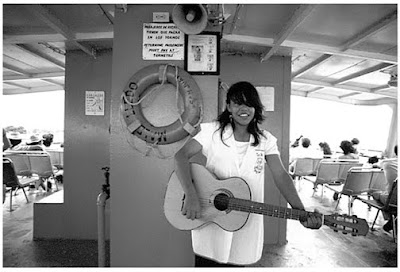 San Juan Ferry
Unlike Alice Olive--I've known Bell-Ah-Monte for years. Since high school. I was the first to develop slide film and remember showing him the results in class. He ooh-ed and ah-ed. I had a home dark room and could borrow the old man's Topcon RE Super with a battery of lenses-- my favorite being a 58mm 1.4 lens. That was a hunk of glass. Like always, I was all hat and no horse.
Dave was shooting with some total piece of crap but he knew his camera's limitations. And he had the eye. He had the eye I wanted. Seeing what no one else can and catching it in a split second. He could also do an amazing imitation of a fly with two halves of a tennis ball. He's still shooting and today makes a living at it. I don't know if he can still do the fly imitation.
Back in the late 70's, I came home on leave and Dave showed me his Kodachrome slides of the Swiss town, Kleine Scheidegg and the north face of the Eiger. I remember staring at his shots open mouthed while the only sound came from the soft hum of the projector. I was amazed and jealous at the same time.
A quick note regarding tradition. All of these photographs were shot on film. Expensive and difficult to process. You never knew what you had for days...in my case...years. I still have eight rolls of unprocessed Kodachrome from the early 90's. No anti - shake control on the camera either. That's what a tripod was for. It was damned difficult back then. Some months ago a reader emailed me and said I was, "a reminder of good stuff lost." I was flattered. But, while I don't know about Dave -- I never want to see a roll of film again. A sheet of Panatomic X and an 8X10 view camera is another story.
Posted by tintin at 10:17

Dad's Nordic-style sweater from his Army stationing in Europe in the '50s. Don't know where exactly he got it. I had to take it on that trip, my first abroad. It just seemed right. I still have it somewhere, probably with lots of moth holes.

My first camera was a used East German Practika, with a broken light meter. Sort of the Trabant of cameras. I treated it like I'd never have another chance at a better one. Fast forward to today where digital cameras do everything possible to replicate the results of...film. Kodachrome is no longer available, except as surplus online, and some lone lab in the midwest is the only processor left for the film. He could process your old rolls.

DB- Find the sweater. We can sell it to Jay Kos and I can recoup the $ I paid for his Otter sweater.

I remember the Practika. Wasn't it like $49.99 in the back of Modern Photography magazine?

You might want to unfreeze that K-chrome and have it souped, the end is nigh: http://www.dwaynesphoto.com/newsite2006/movies-kodachrome.html

helpslip- I knew the end was coming -- I didn't know where to go. Many thanks for the heads up.

Tintin,
If you want a photo that is out of focus, every subject has his or her head cut off, and the shot is so crooked that you get dizzy looking at it, call me. So sad, so true. Kind of ironic when you consider my husband spent fifteen years collecting imagery, processing most of it himself, and then interpreting it. D

NetPrintz specializes in professional quality e6 slide film processing and developing as well as bulk slide scanning. We monitor chemistry and equipment daily and only professionals get near your originals. http://netprintz.net/scans.html or http://www.netprintz.net/e6.html to go directly to the pricing page. NetPrintz is competitively priced and will produce the highest quality output for you every time. We use plastic mounts and they are shipped to you in a plastic box. We are a full service lab producing 30” Chromira print posters, copy work, scanning to cd and photo restoration.