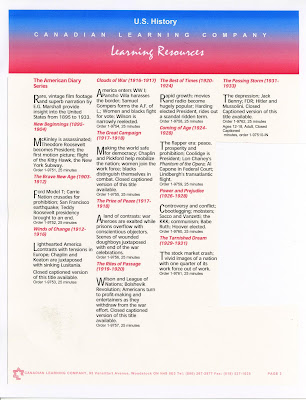 The American Diary - Leave it to the Canadians 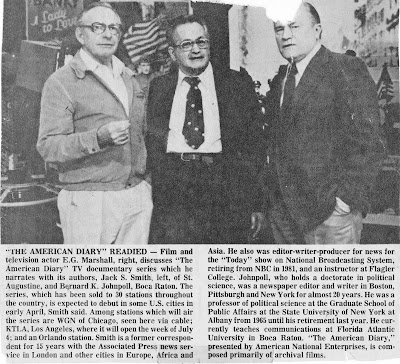 The American Diary was a documentary produced by Jack S. Smith and Bernard Johnpoll. Hosted by E.G. Marshall, I worked on the series as assistant to Jack while a junior in college. Every time I see a Ken Burns documentary --I wonder-- why the 'Diary' didn't make it. Aired on large independent channels through the mid to late 80's it suddenly disappeared.

Covering the history of the United States through celluloid film, the series started with one of the earliest films,' The Kiss' by Thomas Edison. We were to bring it up to the current day but there was a dispute between the authors and the production company. Only 12 episodes were completed and I gave up my dream of accepting the, "Best Assistant to the Producer" award at the Emmy's.

Still, I had a television credit, made some money, picked up three college credits and was in complete awe of the historical footage. My job was to help select footage and time it with a stop watch while Jack wrote the narration on a IBM selectric. Jack had retired as news producer of the 'Today' Show and even then he thought it, "show-boat journalism." God knows what he would think of it today.

I have a cassette of Jack from a phone conversation we had just after I graduated. The deep rumble of his voice takes me back to the dinners in his home, his stories of the A.P. in London during WW II and the talks we had while working on the series. Of my mentors -- Jack was my favorite.

With dreams of writing for television long gone - a friend called me at work years later to tell me Jack had passed away. I turned my chair to look out the office window and saw Jack's face. A dead ringer for Alec Guiness in Smiley's People. His stories came back . So did the dinners and the history of the American Diary. I thought of the bridges he let me write. A sentence or two to wind it up before a commercial break. The opening sentence after the break. I still remember each and every one.

My VHS tapes were lost years ago but I recently found the series streaming on the Internet. It's not Ken Burns. But the writing is clean, the footage still amazing and the memories as clear as ever. I've also noticed we didn't use any hawk screams. Click here for a clip and let me know if you want patch pockets.
Posted by tintin at 18:09

What a great post. Truly carries the essence of your experience and relationship with what sounds like an incredible man. Mentors are so important, and we all should strive to live up to the example set by the best we've had a chance to learn from.

Also like that it showed yet another wrinkle in your incredibly diverse life.

Thanks for the nice cap to a good weekend.

I, too, am surprised that this series didn't make it. Series such as this usually strike a chord with people, if for nothing else other than the nostalgia factor. Dick Cavett did a series many years ago for HBO called "Time Was" - covered the decades 20's - 70's I used these old VHS tapes that one of our history teachers had recorded faithfully when I taught American Literature! They were wonderful. Thanks for this post! And I'll pass on the patch pockets.

I mostly enjoyed this post Tintin because of your recollections of Jack. I've been blessed to have a few of those intriguing friendships with older folks who are flush with good anecdotes, memories and lore. Nice.

He and his wife were so gracious. ME

Who knows why this project didn't take - to me, it has a real Saturday night, 6:30pm cst, after the local news feel to it. Anyway, what a great gig for you.

Maybe you all were just ahead of your time? You never know, maybe Ken Burns saw this and it inspired his career?

DCB- Well said. Better than I ever could. Jack warned me after I was late a 3rd time -- He said, "I'm a pro and I'm always on time. You should be too." I was always early after that.

Preppy 101- I'll look for the Cavett series. Sounds great. I think the genius with Burns is the celebrity voice over. It was great to have EG Marshall and many times Jack would read aloud what he wrote--be unhappy with it--and then he'd say, "Well, it'll sound a lot better with Marshall reading it." Imagine that with 10 different actors AND Peter Coyote.

ADG- Since I've become a mentor I can see how it comes full circle. I recently spent some time with a 19 year old who wanted my opinion about whether he should enlist in the Marines or stay in school. I gave him a list of good and bad for both and never told him what to do. And instead of feeling like an old sage ...I felt young.

ME- Yes they were. Those dinners we had with them were amazing. I don't know about you but they transported me to their New York City just by being at their table.

Cathleen- I do remember that most stations ran it on weekends. You'd think the History Channel would be all over this. I was working at the Statue of Liberty when Burns did his docu on same. I remember thinking it was pretty good but not even close to the quality of the Diary. Go figure.

Jack Smith was my grandfather. I'd appreciate copies of any media you may have related to him. Thanks.

Jack- Please email me your contact info to, The.Trad@Yahoo.com.

It was a VERY good series, and my VHS copy of it is wearing out. I would pay (within reason) for a fresh copy!

Dave- Sorry about my link. Looks like the clip was taken down. Best I could find was this old library copy available thru Amazon:

I put in a quick comment seeing the other was flattering but wrong. The post production company was American National Enterprises. There was something left of it a year of so ago when I was digging around for this post. I'll keep looking and update this comments section if I find anything.

My father was Bernard Johnpoll. I was just thinking about this series (well, my sister reminded me) and I am ever so grateful to have found this. (BTW, the Amazon link is now dead, too.) If either of us ever finds a valid link I believe we should share. Thank you again for having put this here so I can prove to myself I didn't imagine American Diary.

Hello! Thank you for the comment. Sorry about the link. I’ll dig around. There was a source, in Canada, that was selling tapes about a yr ago. I’ll send it to you when I find it. Feel free to email me the.trad@yahoo.