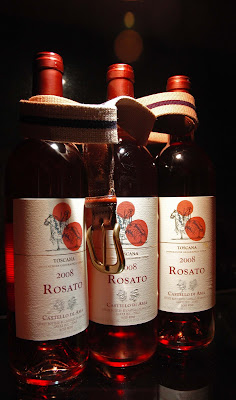 That rather plain Jane belt up there was purchased at J Press almost 10 years ago. I thought it was perfect for khakis. I've probably worn it twice in the last five years because of the word, 'contrast.' A tan and navy surcingle almost disappears on a pair of khakis. Rather, it should be worn with a navy or olive chino. Matchey - match, for me, is the hallmark of boring. I saw ex mayor of San Francisco, Willie Brown on television recently and while I was amazed he was wearing a tie that matchey -matched his pocket square - - Brown's reputation of a sophisticated dandy is legend - - I was even more amazed he was defending a man who raped a 13 year old girl. There's contrast for you.

I suppose Rose' should be put away with the seersucker and white bucks but I can't just yet. There's been a week of perfect Indian Summer days here in New York and as I share a bottle of Castello di Ama with the Foxtrot on the roof deck ... the chatter of TV news readers screaming NYC was, is and always will be the target of terrorists disappears as a third glass is poured and I look out at the Hudson. Most Rose' is pretty weak but well chilled it can hit the spot on a hot Summer day. This Rose' is big. Almost like a big Italian red from Umbria. It's $14.95 at Sherry Lehmann, where they've never given me anything-- free or discounted-- but where they'll happily take back a bad bottle for a refund or exchange.

So, I don't wear that belt anymore but I can't stop drinking a wine meant for Summer. I'm living in a city that has cross hairs on it but I'd rather ponder David Letterman's future. And I just can't understand - - for the life of me -- what Willie Brown is talking about. But I do have three more bottles of Rosato. Maybe they'll help me make some sense of it all.
Posted by tintin at 06:45

I'm thinking they will be just the thing... Have a great weekend!

matchey-match tie and pocketsquare is a crime, albiet much less severe than the crime mentioned above, but a crime nonetheless. the observation on letterman's fate is an interesting one, but I'd rather ponder how to get Jay Leno off of television for good. enjoy your weekend and your rose and ill enjoy mine -----> http://www.bumwine.com/wildirishrose.html

You have a roof deck? In NYC? Where you can share a big rose'? Cheers to you!

Sounds like a lovely way to pass a morning... er, I mean, evening - cocktail hour, naturally.

I love a super cold rose with any sort of lunch bistro fare, regardless of season. And I am too young to know anything of disco.

As for Dave, I am wonder about that also, hoping he can work it out, he is a good neighbor in this our little hamlet. And i don't know wha tht highway department would do to fill their days without him...

M Lane- One down. Two to go. Keep an eye out for your prize. It went out today.

DB- If a building in NYC has a roof--it most likely has a roof deck.

Dust Off- No, you're thinking of White Zinfidel...the go to wine south of the Mason Dixon line.

Blush- I may be going back for more. Saw some in a restaurant for $55. The Rose. Not Letterman.

Tin You are RIGHT...it WAS White Zinfandel. I remember ordering that shit all night for some trixie at the Holiday Inn disco lounge at Tyvola Road and I-77. She called my Polo Rowdy spectator loafers...tan and white mind you..."tic-tac" tacky while admonishing me to fetch her another dose of White Zen...and her pronunciation of Zen contained about seven syllables.

Then she didn't want to dance anymore 'cause her boob job hadn't completely healed and "they" were hurting.

Bravo TinTin, for your stand regarding Roman and Willie. I spent 30 years in SF including the retro-prep '80's where trad was in full bloom.

Just before reading your Friday Belt this week I was reflecting that your writing is not altogether dissimilar to Mr. Brown' good friend the dearly departed Herb Caen.

While Mr Caen's egalitarianism put him political as well as culinary and sartorial cahoots with Da Mayor, I would hope that he would have had the sense of civility to not give the winking nod to raping a 13 year old.

There is no greater honor than protecting our children and no greater shame than exploiting their weakness for selfish carnal pleasure.

Tradition without honor is dead.

Thank you again for your continuing cultural contribution, TinTin.

Dust Mite- Was she a first or second cousin?

Doug- Good to hear from you again. Always have liked your POV and this is no different. Well said and checked out Mr Caen this morning - - I'm flattered...