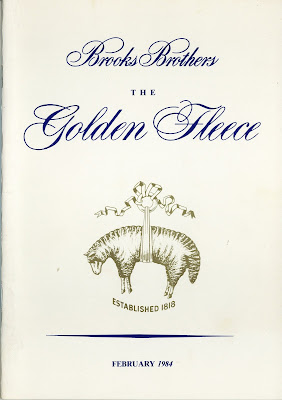 The Golden Fleece - An Employee Newsletter 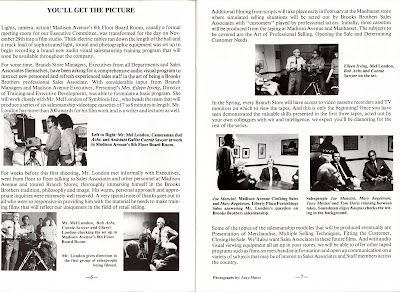 On far right - Mr. Tom Davis circa 1984
The 'Golden Fleece' was a newsletter for Brooks Brothers employees and I remember it fondly. A lot more fondly than my old store manager. Flipping through a copy, I was surprised to see a photograph of Tom Davis back in '84. If they ever finished that training video -- I never saw it as an employee... but that figures knowing my manager. Click on the image to read the story.

I've mentioned before how I think Mr. Davis is the real deal. While you can knock what Brooks is doing nowadays - -it's hard to find fault with the man behind the Made to Measure shirt counter. I stopped by earlier in the summer with an idea for a shirt of my own design. I wanted to take the idea of a solid panel 'Fun' shirt to University Stripe panels using yellow, blue, green and maroon oxford cloth. And, I was thinking of putting an embroidered Golden Fleece on the bottom front tail of the shirt. That little bit of branding known only to me. Man, I thought I was channeling Michael Bastian.

Tom smiled and pulled out a book of fabric swatches. He put on his reading glasses and pointed to a page where there was a blue and a maroon university stripe. He turned the book to me, took off his glasses and said, "That's what I thought. We only have these two stripes." "That's it? No yellow or green?" I asked. Tom shook his head. Now, I know I can get this shirt at any number of custom shirt makers here in NYC or my old shirt maker in Chicago, Riddle McIntyre...but there was something important to me about having Mr Davis handle this order.

Tom closed the book and we talked about the old Brooks. How, when I was an employee, they had five or six colors of university stripe. We talked about the old collars, the new Satanic no-irons and the erudite character of wrinkled cotton. Mr. Davis works on appointments and I noticed a distinguished man with his wife who was waiting for me to un-ass my chair. I shook Tom's hand, turned and walked to the elevator. Not so much broken hearted - - these are just shirts after all - -but let down - - because something so easy to do 20 years ago -- has vanished.
Posted by tintin at 13:04

And don't get me started about last year when I walked into BB here in Richmond and asked for a pinpoint oxford. "We don't carry them. Never have." "I'm wearing one right now. Have a nice day."

Tintin,
You must belong to the hardest working West Indian family from the Hey Mon sketches on In Living Color since you've had so many jobs. D

Did you ever sketch out your shirt design?

Heartbreaking post. Maybe we can go to Chinatown and get some guy to bootleg us a few. Then we can wear them into the store. Or perhaps not.

Sad, isn't it? Every time I look at an old Brooks Brothers catalog from the 80s, I am astounded by the sheer breadth of color that was available back then. I still have a green BB university stripe (a relative who works magic with a sewing machine recently turned the collar for me), but the yellow stripe is long gone. I would have never discarded it had I known it would disappear (it was pretty tatty, though). I've tried the non-iron shirts, and resolved never to go there again. They just aren't the real deal. I just can't understand why Brooks would do this to themselves. The very idea of Brooks Brothers seems to have been lost by Brooks Brothers themselves. In the meantime, it's only blue and burgundy stripes...and I'm changing my blog header in your honor for a while.

Sigh. My green university stripe will never leave the closet!

With regard to the non iron shirts, I surfed and discovered that their "unique" character is due to a fabric impregnated with a plastic resin and a glue that makes the seams pucker free. Modern convenience has been reduced to plastic resin and glue. TAL (Hong Kong)holds the patent for the glued seams and manufactures for Brooks out of Malaysia.

Easy and E - Yeah, that's a problem. We're lucky here in NYC to have so many old timers still at 346. It's amazing. And I'm grateful.

Talked to a kid who was the MTM guy at a BB in FL. He told me he didn't like Martin Greenfield because he didn't understand suits. I left him and his duck toed Kenneth Coles in a cloud of dust.

LAS- Don't jump the gun. This is a 2 part post which I'll finish tomorrow afternoon.

HTJ- Burgundy...of course. What's wrong with me. I'll let maroon stand just so everyone knows I'm an idiot. And no longer working in retail.

Some heavy questions there. There's a resignation among the old school at BB. But there was a resignation among the old school that were retiring when I was there in 1985. Still, the quality issues, off the reservation fads, the hustle (not in the good way) of some of the salespeople and I guess a cut throat focus on profits... Throw all that in with a general dumbing down of the customer (wash and wear fits this niche nicely) and you have mediocrity fringed in over priced Anna Wintour fashion statements. It's turning into the BBC show, "Are You Being Served." Which I never did find all that funny.

Mark- It was also pointed out to me last year that this process gives the shirt a much shorter life. Hey, why should Brooks screw themselves by making a shirt that lasts. That's just dumb. I wanna shirt that locks in my B.O. and frays at the cuffs after only a year of wear. I just wish they'd make one in solid red. Time will tell.

I really appreciate these posts because !. as a widow and 2. with a son who is grown and married and no longer needs mom when shopping, I am out of touch in the men's clothing world. I do know that my son's first suit came from Brooks Brothers! That was the only place good enough for my "young man" ;-) Thanks again for another interesting and nostalgic journey.

On the other hand, within the past year BB has acquired 1/4 interest in the Ballantyne, Innerleithen factory. Within the last two months they've inked a "$100 million deal" to market garments of expensive New Zealand Escorial wool spun and processed by Loro Piana, whether in Itai or Connecticuti dunno.

The cold hard fact is that green stripes languish in inventory or are remaindered elsewhere like "The Reminiscences Of A__ & T_____ G___" tomes are to the back shelf at The Dollar Tree. Orphans, each. Ta'er

You can't get the colored bengals but you can get the moon boot....somehow the two just don't match up. I'm fairly certain that Rugby is working on something very similar to what you were looking for. I'll keep an eye out.

I started shopping BB in 1960, to get my college wardrobe-we still wore suits, blazers and sport coats in college then, mostly at frat events, rush, and sit-down dinners.Shirts were always tucked in, ties always worn with sprt coats and suits, and on and on. (yes, jeans were casual wear, but "chinos" were predominant).What a different store BB was then! Sad...

what are you guys talking about> I just ordered 6 shirts from their MTM line and they had every bengals color available.

Anon 03:43- I was talking about university stripe oxford not bengal. Enzo mentions a bengal which may have confused you.

I always inspired by you, your opinion and way of thinking, again, thanks for this nice post.