Why Not? Cheerful Socks 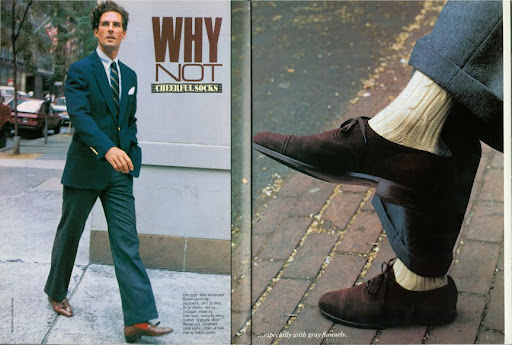 This sock thing or lack of. With me it goes back to 2002 or 2003. I saw a Polo salesman in Chicago -- navy chalk stripe suit, black monk shoes and bare ankles. It was Winter. He was hairy. I imagine he had his back shaved every other week. It didn't look good then. It doesn't look good now.

I'm not saying you can't go sockless in Summer. It's what you do. Boat shoes, espadrilles (better you than me) or just a simple canvas deck shoe. You're on the beach, you're in shorts and you're relaxed. OK, I never relax on a beach but you probably do. Time, place and occasion.

Not sure the same idea works -- in a suit -- selling on Michigan Avenue -- in the Winter. If that is style then my trouser cuff square can't be far behind. How can a man's naked ankles between black calf leather and Dormeuil chalk stripe wool look good? I suppose it's because the fashion boys say so. But are you gonna listen to those humps? Next they'll tell you to wear a tie, shirt and suit all from the same material.

Nothing looks better between gray flannel and brown suede than yellow cabled cashmere. It's perfect. It's contrast. It speaks to a classic aesthetic that isn't trying too hard. It's an elegant step forward, and -- you mark my words -- like laser surgeons removing tattoos for the next ten years -- a correction is due.
Posted by tintin at 06:22

RL is especially prone to this type of affectation.

With you all the way tintin on the great question of when to go sockless. Also on the greatness of cabled cashmere's look and feel. Only one problem they're expensive and virtually disposable after a very few wearings.

My dad is no icon but I am... which is why I wear large woolen Boy Scout socks with my shorts in summer, and I will now start wearing bobby socks with my suits in winter. Especially ones with the little pom-pom on the heel.
Come follow me everyone, I am a blogger so I know about these things!
(I still think plaid pants look silly)

honest question - what is the difference between a deck shoe and a boat shoe?

"Time, place and occasion." You can count on people to forget that advice every time. Remember that old saying, usually admonished at European functions in the movies: "You Americans are always overdressing for all the wrong occasions." I think we can now safely say the inverse is true: "You Americans are always UNDER dressing for all the wrong occasions." The sad part is that the Europeans are closely following us.

Sockless in summer is fine...chinos, loafers, no tie and blue blazer when called for...no problem. Shirt and tie with either a suit or sport coat and then socks are a must, no matter what season in my opinion. As for colorful socks, I tend to wear them with a wool blazer or sportcoat...more staid socks with suits (which are worn less frequently these days).
SNP

A perfect commentary! The first time I met my wife of [thir Monday] 24 yrs, she remembered my "fancy socks".

I'm not even sure it's really necessary to discuss "whether" it's wrong to go sockless in a suit.

On cheerful socks: I can see it as clearly as if it were unfolding before me right now. 1989. Steve Martin gets sent out to do some impromptu time filling on the SNL 15th Anniversary live broadcast. Every celebrity is in a tux. Everyone looks good. They all respect the importance of the occasion and have dressed accordingly. So anyway, Martin goes out in front of the camera and ad libs this thing where he gives a "whoop". The audience responds. He gives another one. Ditto. Then he gets stuck. He can't stop whooping in front of the camera. He struggles. He twitches. He's flummoxed, why can't he stop whooping? More jerking and flailing and whooping. There, it's stopped. No it starts again. This goes on for the 60 seconds or so he's asked to fill. And toward the end, while he's twitching and jerking like David Byrne in a big suit, his beautiful tux trousers lift up above the break of his shoe and I, - all of hip America really - spy it. Fire engine red socks. What style!

Those pale yellow socks look like white socks that have seen many more than a very few wearings.

Anon-RL is pale in comparison to the hip. Their show playing in NYC is dense with pretension layered on phony all without any care in what they're selling. Soulless. Greedy. Stupid. They're bound for greatness.

B Joe- As always -- you are right. I've had issues w/ cashmere socks but hand washing and air drying helps extend their lives by a wearing or two. The wool / cash blend is a good option and I have a couple pair in yellow that are going on four or five years. Mostly 'cause I don't wear them much.

Bro - I hear Mormons have some fab underwear. Maybe we can work out something with McNairy.

cc - We used to sail Sea Snarks at the Ft Monroe Officers Club in the early '70s. A boat shoe back then was leather while a deck shoe was canvas. I have no idea if we were correct but it's a lot less worse than white bucks with a white belt or people who insist plain front khakis can't be cuffed. Follow?

DB- You were so helpful with the images here. Thanks. I'm still trying to fig out how to convert pdf to jpeg on a pc. It makes the following all the more painful but necessary: They're cap toe not wing tip. Not bucks but suede or reverse calf. But I love you like the bother I never had.

SNP - I like your tie/sock association. Although, tie sans shirt and shoe sans sock seems to be the next trend.

M Lane - When I worked at Brooks Brothers in 1896, we did call them fancies. Socks, that is. We also called some customers fancies but that's another story. Congratulations!

Ben - I remember. Martin is the only alpha hotel from CA that can dress worth a lick. Not sure why the rest of the men in that state have such troubles. Maybe 'cause they drive everywhere.

Anon- That's funny. They look new and yellow to me. Unless you're talking about these socks: http://thetrad.blogspot.com/2009/07/socks.html

I'm just waiting for the day when on StyleForum someone "poasts" a photo with "cuff squares".

new york city is full of trend following jackasses who don't wear socks with proper shoes. may the joke end once and for all.

Fancy socks-patterned socks. Should be outlawed.

anon- Trend following jackasses are everywhere. They're just more visible here since none of them know how to drive.

ADG- I never knew you were a sock-racist.

Every time I see an older man wearing something nice and leather shoes without socks, I have to mock him. It is like a women who refuses to update her hair from 1978. Cute when you were in high school and wearing loafers, OP shorts and chinos but now you are just pathetic... even if your parents aren't buying your fancy button down collar shirts.
If it is a young guy, I just think he is weird.
Ouch... I need to re evaluate how condescending I am about such a silly issue... It could sock warfare.
mb

mb- No need to reevaluate. It comes with age.

Fred Astaire wore that look well. I think he had matching yellow laces, too. That might be a step too far, but yellow socks will cheer you right up when the weather turns flannel-y.