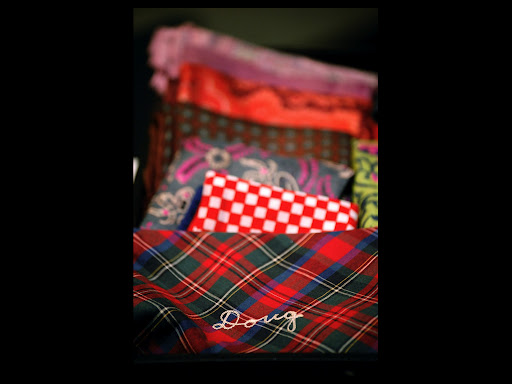 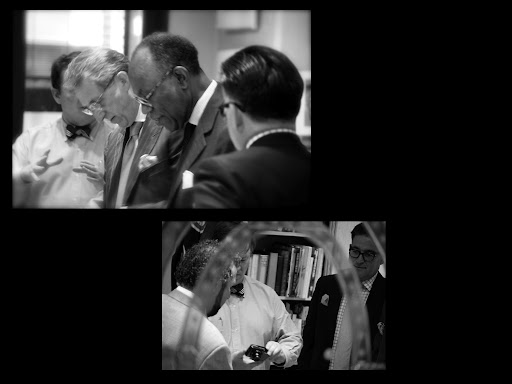 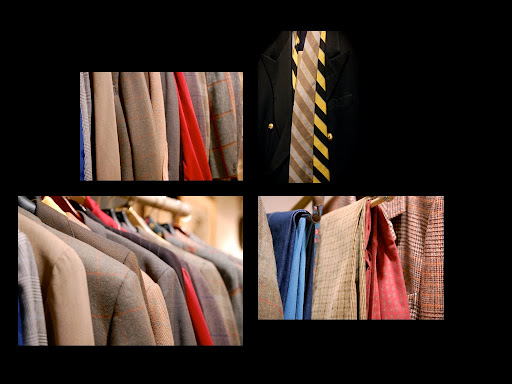 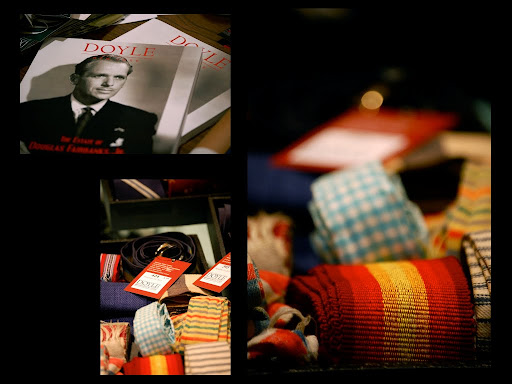 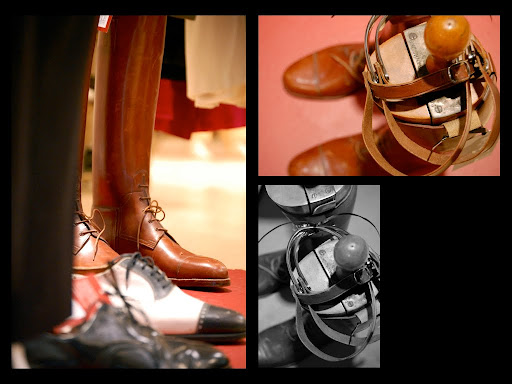 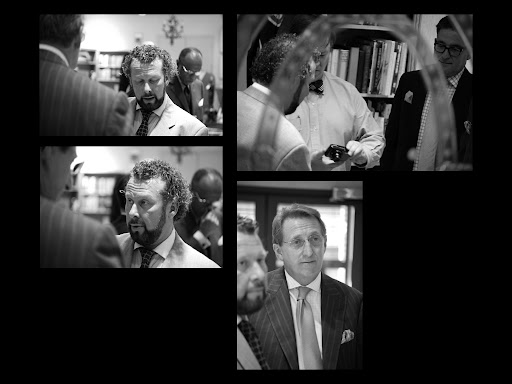 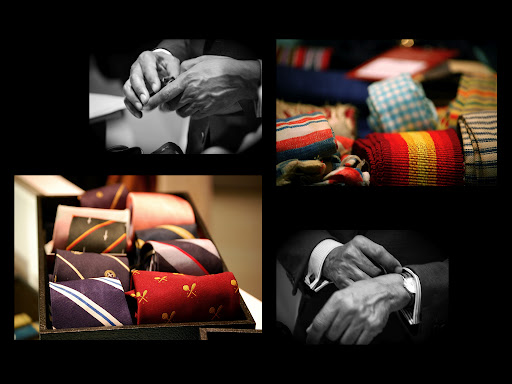 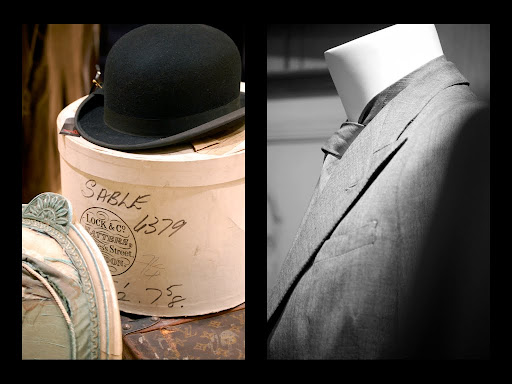 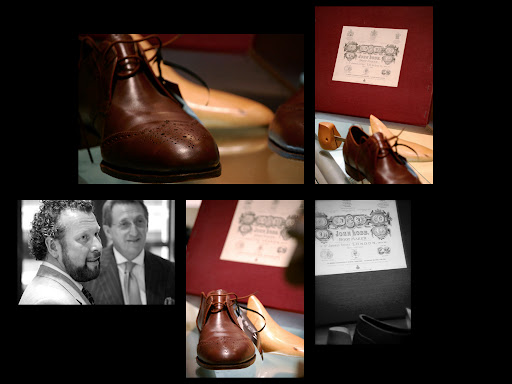 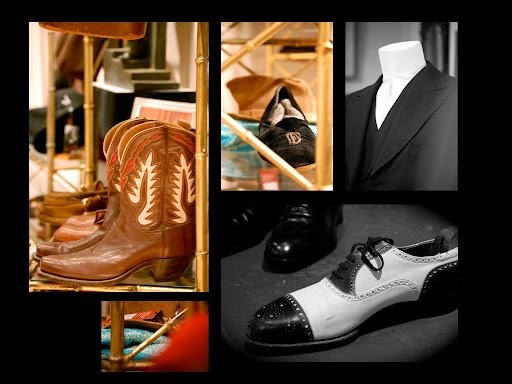 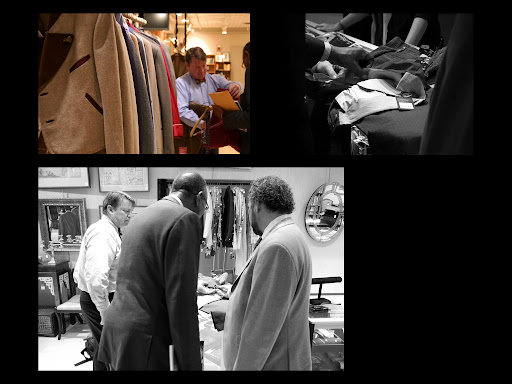 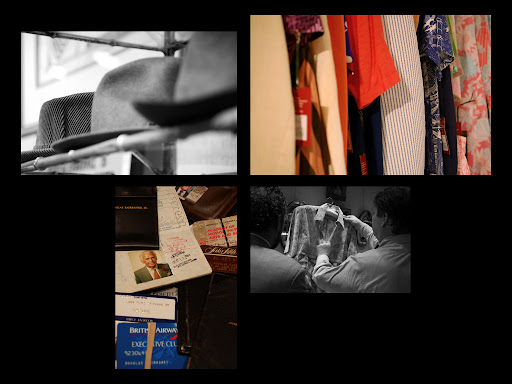 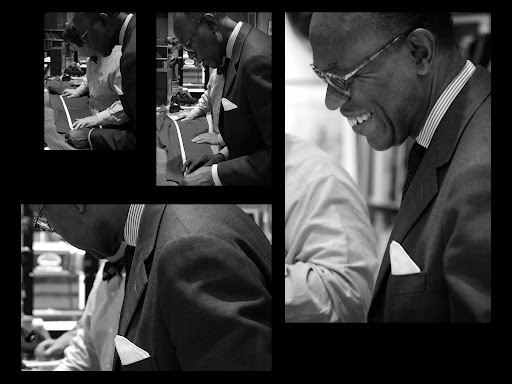 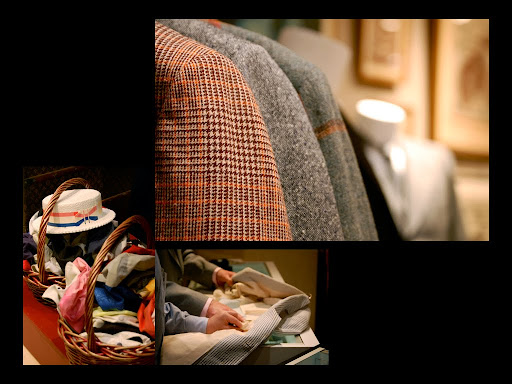 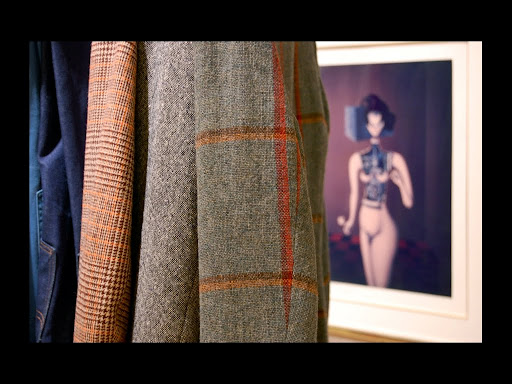 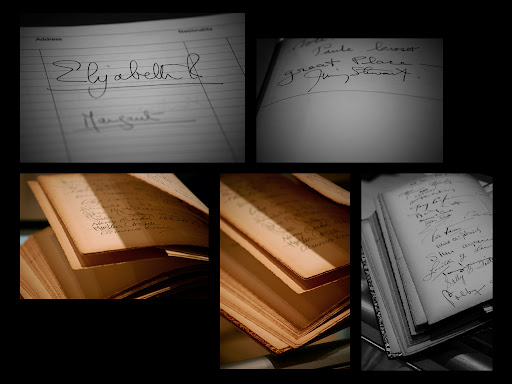 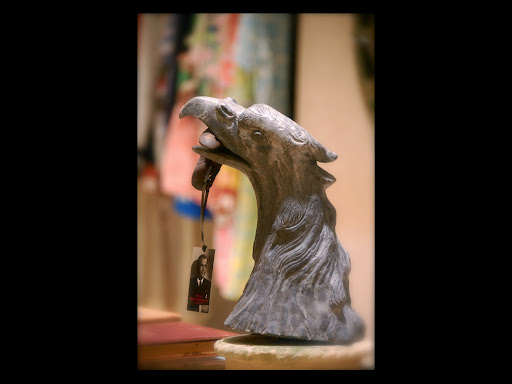 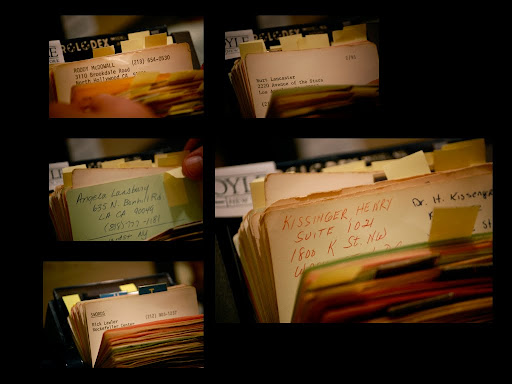 Photos for The Trad by Alice Olive

It's an odd thing...digging through a dead man's belongings. Low estimates on Lobb, Huntsman and Lock had me salivating like a hyena until I was struck by a thunder bolt of guilt. A conscious revelation of picking over the wool, leather and felt of a man I only knew through books and film -- It suddenly seemed wrong.

Standing at Fairbank's desk, I looked down on the snap shots, post cards and newspaper cartoons he felt fit to place under glass. I picked up his Dunhill brief case, placed it on the desk and opened the leather flap looking for something...maybe loose change. I don't really know.

The Rolodex was magical. Not because of the famous names, but because of the local grocers, a car rental car company behind Kate Hepburn and the florist who delivered long stems roses in NYC for $50 with two hours notice. Still, it was refreshing to see Princess Grace's signature in a guest book -- Her letters fat, cursive and squat -- just like a 16 year old high school girl.

Then it hits you. A life represented by lots in a room-- together -- like a museum exhibit. Perhaps more so -- just not for very long. Soon it all disappears among the bidders -- never to be seen in one place again. That's the magic. Whether you bid or not, stop by to see a life, and make of it what you will. I discovered a man whose sartorial interests paled compared to his storied life. And that discovery didn't cost a thing.

I don't think you should feel guilty in the least. You are clearly going about this in the right sort of way.

DF has no use for these things and if he would have been repulsed by the idea of strangers pawing over his stuff, he would have made other arrangements. If anything, this collection of remarkably personal things has led you to a considered appreciation of some of DF's choices in life. How could he not be pleased by your informed admiration of his taste? Your ability to see what he must have seen in objects that obviously gave him considerable delight can only be a shared compliment.

Having lived the life that these accessories testify to was the real triumph, a triumph that remains intact regardless of the disposition of the material. Your awareness of this is all the permission you need to enjoy the leftovers. If not you, then who?

On a related theme, I recommend the novella Utz by Bruce Chatwin.

I, too, have experienced that odd feeling of "guilt" at previews and Estate Sales...it brings the same solemnity as attending a wake or funeral to my surface. It is sad when you think this collection of a life will be scattered to the wind of collectors, but hopefully they will be worthy beneficiaries. That shot AO caught with "my" boots is perfect. Wish I could get down there, but I think we may be floating towards the other side of the pond if this rain keeps up.

Beautifully written and respectful post. Excellent photos and montages by Alice Olive, too.

A little disappointing that some family member did not wish to keep some of DF's most personal of items like the desk snapshots, passports and other ephemera. These less glamorous things won't really command that much money in the grand scheme anyway.

As a fellow Doug, I suddenly find that I need that embroidered handkerchief at the top.

Everything but those cowboy boots.

And what more can be said about the work of Miss Olive? I really like the pic of the derby on its box and the montage of TD.

Oyster Guy says it all & exactly right. It can be a depressing event to see a life relegated to odd lots. But DF was more than the sum of his acquisitions, as are we all.

Very well said. I go through the same feelings every time I hit an estate sale or auction, thinking about the personal life and history stored in these objects. Perhaps to rationalize, if I go home with an item, I feel that I become part of preserving its history while adding a little bit of my own.

Your post was beautifully illustrated by Alice Olive's amazing photography. I especially like the action caught on the mirror.

It would never in a million years occur to me that I'd be interested in an auction of DF, Jr.'s old stuff, but now, I really really am.

"A life represented by lots in a room..."

My guess is if you asked any person who knew the man, they would say his life was not represented by the stuff making up these lots.

In the end, it's just stuff.

Vera Fairbanks, Douglas's widow, told me last night me all proceeds from the auction will go to endowing a scholarship for young film makers, a project I know Douglas would have endorsed enthusiastically. So feel no guilt and bid freely!

"A conscious revelation of picking over"

It's not guilt it's melancholy. I experience it every time my old lady drags me off to some estate auction or sale and you're turning over the trinkets, furniture, silver, etc of someone who once enjoyed them and now they are to be cast to the four winds (or more prosaically recycled). And ultimately you know your own "stuff" is going to be in the same place. The moving finger etc.

Won a blazer. Fits perfectly. a great bargain, and a contact to an elegant gent, DF Jr.