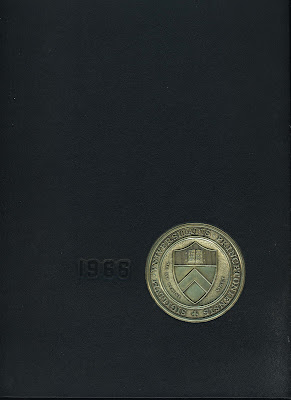 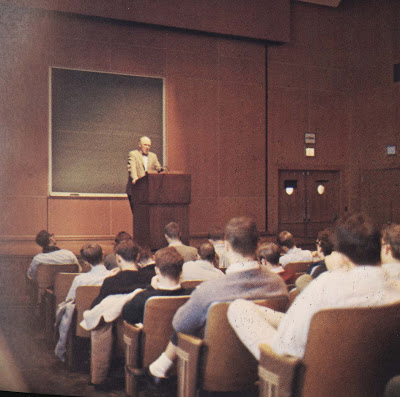 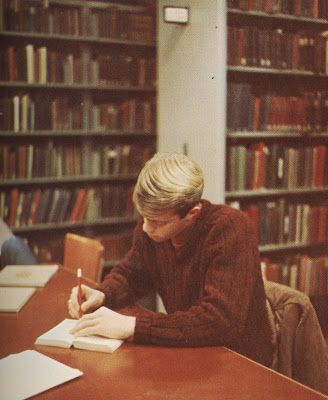 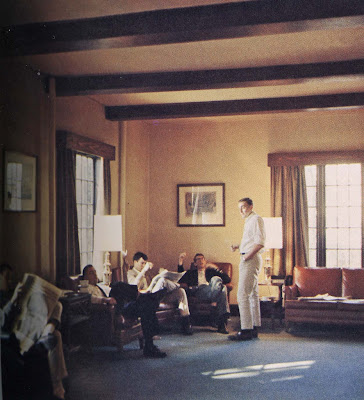 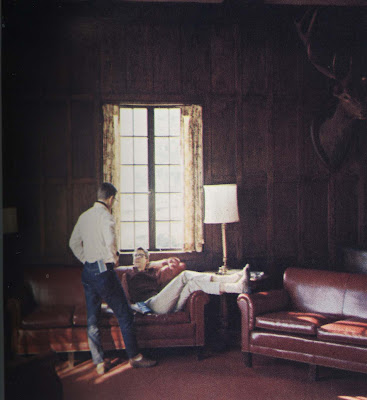 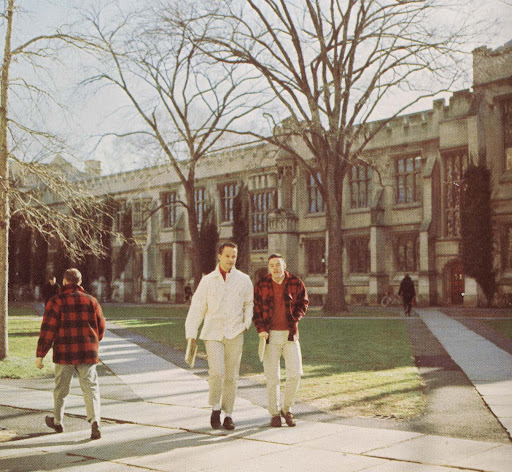 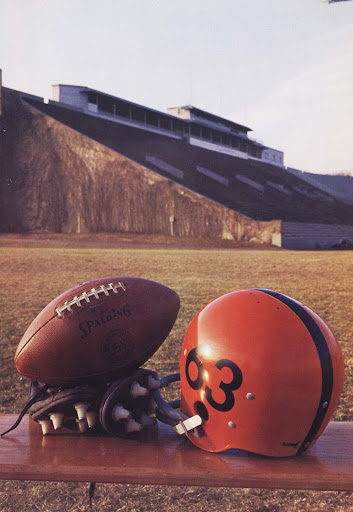 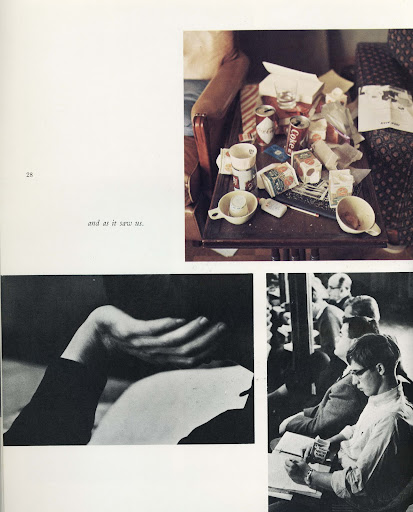 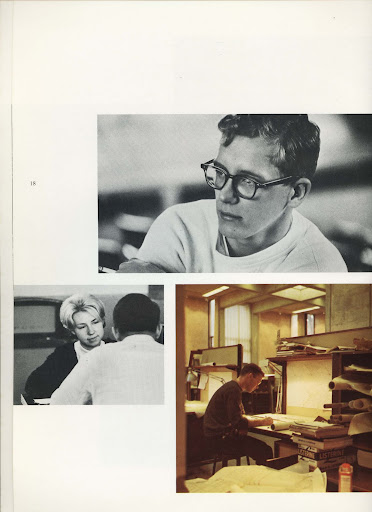 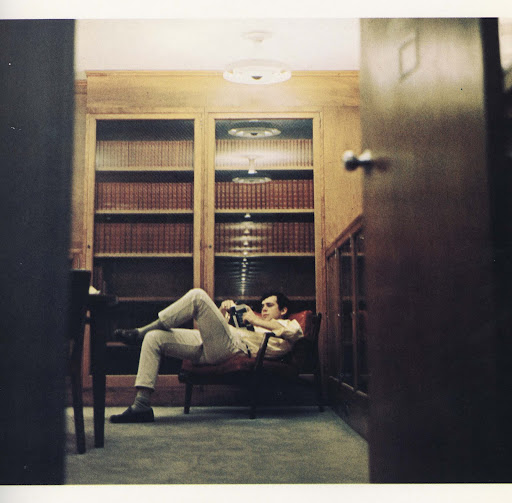 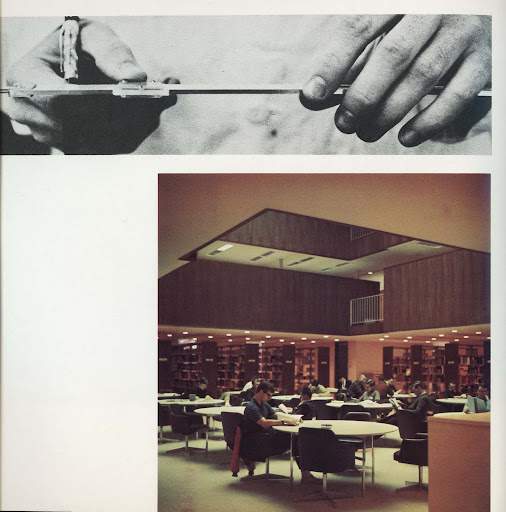 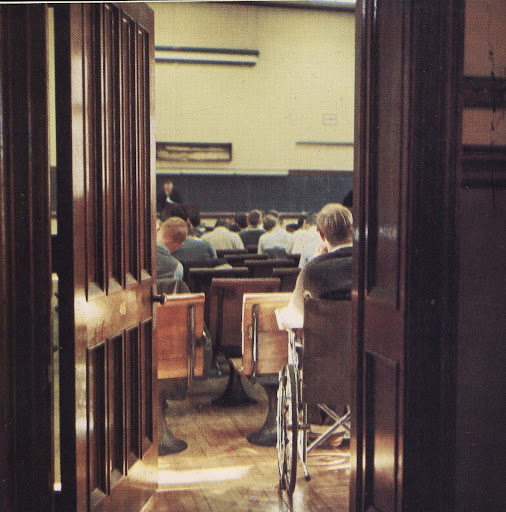 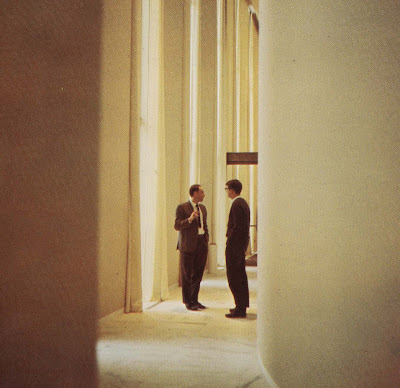 "If your picture is fuzzy and your name is spelled backwards, we apologize, but we did our best."


So said the editor of the Princeton yearbook in 1966. The 'Bric-A-Brac' had some great years in the '60s and a couple not so great. '66 was exceptional and like any good year book it captured a time not just for the students but, it turns out, for those of us who didn't have the SAT or the net worth.

Who knew we'd be admiring the insouciant ease of high water khakis and white socks 45years later. What really strikes me is the reality of it all. This is not a carefully staged Polo ad shot by Bruce Weber but simply the day to day of a school year shot by a freshman.

It would have made more sense to post images from the '64 -'65 yearbook - the year Take Ivy was shot on campus - but the '66 yearbook is so good I couldn't wait. I promise to post '65 tomorrow. Until then, enjoy a look at Princeton and 1966 from the student perspective. Different from Take Ivy but no less artful.
Posted by tintin at 04:30

Great slouch chair, fantastic old Coke cans, and that is the closest that #63 helmet has ever gotten to the ball.

Great photos, T-Dawg, thanks for posting. I like the short back-n-sides haircuts, and those Mackinaw coats in the 6th photo from top.

Didn't Kagan go to Princeton? It amazes me how much some Trads still for some reason idealise the Ivy League, when in fact these institutions have changed enormously over the last few decades and today do not in the least resemble their former selves in administration, student body, and curriculum. I guess the ugly truth has not yet sunk in. The past is so much more attractive.

I guess I can relate. Looking forward to receiving the copies of Take Ivy.

Curious that you are writing about the Class of '66. I'm reading a book entitiled "The Classmates", a portrait of sorts about the St. Paul's School Class of '62, more than a few of which I'm sure wound up in the Princeton Class of '66. The book came out of an email group of former classmates that was spawned by the 2004 Presidential campaign of John Kerry, the most illustrious member of SPS '62.

Great style notwithstanding, the place depicted by these men, forty or so years after, sounded dreadful- cold, cruel, lonely, and emotionally terrifying. SATs and net worth may not be all they are cracked up to be.

Another theme that emerges is that of societal elites on the verge of a cultural upheaval. The values were drummed into them were seemingly cast to the wind in the ensuing years of the '60s and '70s. (On that note, by the way, I can't wait for Mad Men to start up again.)

brohammas- I remember as a kid pulling off the top, sticking it in the can and drinking. I don't think I ever saw a warning against doing that.

LBT- Knew you'd dig the hair. I get down to Princeton a lot and it's a very different place. I wanted to post these not as a covet of the Ivy League but more as a comparison to Take Ivy. In many ways the yearbooks tell a stronger story.

Anon- Great points. As an army brat, Princeton may as well have been Mars for me. For me, these yearbooks are wonderful stories and, once again, a nostalgia for something I never experienced. It was certainly an era coming to its end. In many ways for the better. In many ways - for the worse. I can't wait for Mad Men.

I have to say I enjoyed these photo's far above most of the ivy school's shots, possibly even more than take ivy. these seem a bit more real to me.

the mess, frosted flakes in class, lectures, mackinaws, the slouched chair...all hits home a bit more to what most people remember of school.

Fifth pic from the top looks like The Terrace Club. I saw a few gigs by a band called Mod Fun there in the mid 80's and DJ'ed a 60's soul night there '99.

I love the look of the rooms. Those wooden beams on the ceilings, the paneling. It's perfectly at home then, 50 years prior, and 40 years post.

The yearbook definitely paints a picture - it' accuracy not withstanding, I enjoy it quite a bit.

We were far less hip, 10 years after. Also far less male. Some of us.

The "paper chase" (a boomer staple), and in white socks, no less. Gotta love it.

I want those Buddy Holly glasses.

Love the classic imagery. I imagine these images will soon show up in an updated version in a magazine/catalog. I am slightly mad for red buffalo plaid so I love that "men walking in the quad" photo.

Thanks so much for sharing a little about your time in LB over on my blog. I loved hearing about it.

Fellow over at "Ask Andy" had a question about how high "floodwater" (highwater) khaki hems ought to be. I think I'll try to link him to this series, those are just right

drinkin & dronin- I know what you mean. A credible gathering of bric a brac would make a nostalgic coffee table book.

anon- you're a mind reader. Working on it.

wilthomer- Can't wait to explore your blog. I'm a big fan of Booker T and the MGs. Thanks for your comment. Any pics from that DJ gig?

Chris- It's this or I have to write something.

LPC- I gave up my apt in Phila (circa 1986) to a woman who taught at Princeton. I don't think she had shaved her legs...ever.

DB- THat's a great shot. Amazing how the angle really gives it a sense of moment. I'm not so sure about the glasses but I always leaned to wire frames.

La Bellete Rouge- Thank you for the LB memories. So nice to meet someone who loves terriers (rule). I swear, if I saw one Jeep Cherokee with a Golden Retriever in it, I saw million.

NC Jack- I should use a highwater category. Thanks.

Very. cute. boys. Where did they all go? I bet they look even better now!

The guy slouched in his chair isn't wearing chinos, he's wearing wheat jeans - they were like Levi's but in a kind of offwhite color. I had thought they might be peculiar to Cornell, but evidently not. Too cold in winter to wear chinos.