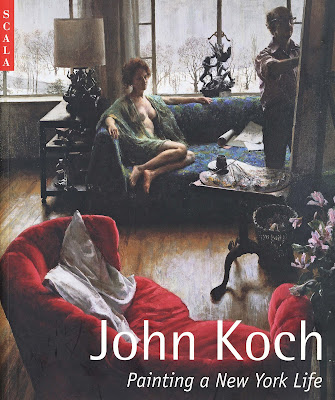 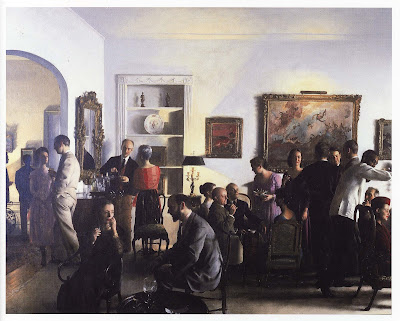 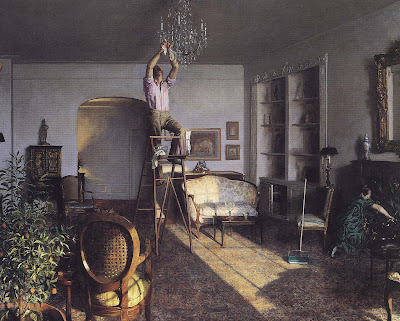 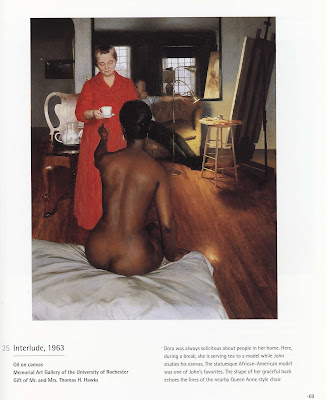 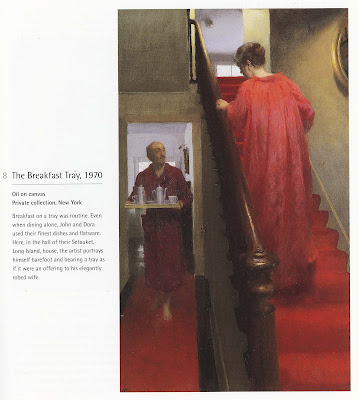 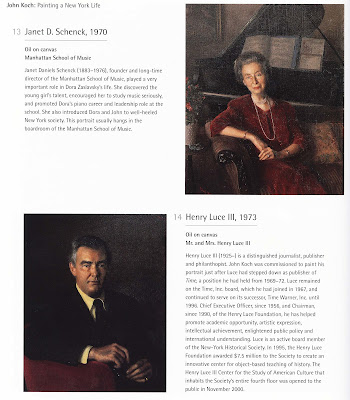 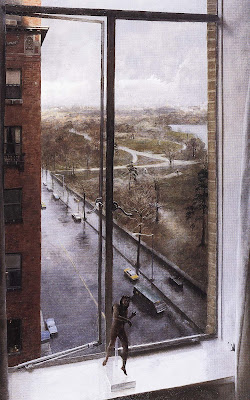 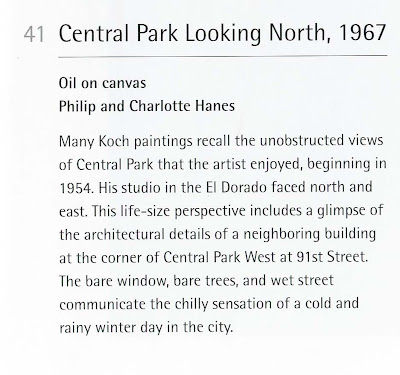 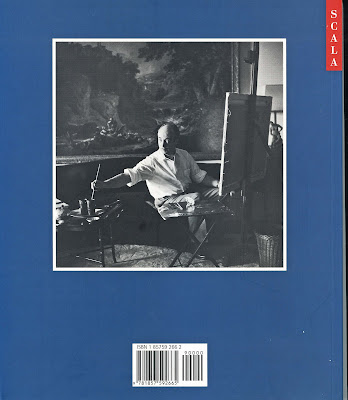 The New York life depicted in John Koch's paintings is about connecting. Many of his paintings seem to be about listening as well, and not simply because his wife Dora was a music teacher and theirs was a household filled with music (including the delicate tintinnabulation of the cocktail shaker) and musicians.
Picture after picture offers an image based on the sociability and togetherness predicated on voluntary coexistence, on the company of other people, on a love of the surrounding world, of life as a frame and setting for people, and of people as the vital force in life.
Michael M Thomas from Painting a New York Life
I was thinking about Koch while I watched, I Am Love last weekend. Each scene in the movie reminded me of a Koch painting. Compared to Vermeer by art critic, Robert Hughes, Koch's scenes are not just American as opposed to the film's Italian aesthetic, they are every bit of New York City. In style, manner, humor and sex.
John Koch was a self taught painter who lived most of his life in New York City, and for the last 24 years of his life, in a 14 room upper west side apartment in the El Dorado overlooking Central Park. Hugely overlooked then and today, John Koch (pronounced Coke) is HIP (Hugely Important Person). At least in my book. Maybe yours as well.
It's all about that nostalgia for something I never experienced. And just because I didn't experience it doesn't mean I can't love it. Isn't that the point of art? To look at a painting and feel like you were there? Koch takes me there. I long to live in his New York of the '50s and '60s and even '70s. I want to be at that party. I want to hear his wife's piano lessons. I want to smell the cigarette smoke and hear the tintinnabulation of the cocktail shaker.
Instead, I was in a mall over the weekend.
Posted by tintin at 10:32

tintinnabulation...shit. Why didn't I come up with something like that? I'll be stealing it and morphing it. thanks.

Those paintings are amazing. A cross between Eric Fischl and Thomas Kinkeade, but on this side of the art vs. crap fence.

I like your comparisons to the vistas in I Am Love. I saw it for a second time because I felt there was more to take in visually. That I'd been too absorbed in watching it 'all' that first time. So glad I did. What an amazingly shot film. Thank you for this post. I was unaware of Koch.

I'd not heard of Koch. I like "Interlude" the best, I think. It's just enough off-putting while simultaneously intriguing and sensual.

Don't you hate it when you realize that what you're doing is so banal you can never reclaim that lost 2 to 3 hours of your life again? Spending time in an airless, soul-sucking mall - except when it's really cold outside - is 180 degrees from painting nudes overlooking Central Park. At least you can take an iPod, loaded with Dave Brubeck. Or a camera. Which you did.

If I lived in NYC I'd probably kill for that northeast view.

ADG- It goes with your pants.

LPC- I've seen you trying to stir up things at Maximinimus with your Thomas Kinkade comments. You might enjoy this:

Alice- I missed a lot of the subtitles because I could not take my eyes off Swinton.

DB- Well said. I have a northwest view ... of another apartment building. But for me it beats the view from Vilano Beach. Hands down.

Is that a ghost or a very small member of the KKK sprawled on the sofa in the first photo? I'm not familiar with Koch's work and it was quite a revelation. I can see I need to do some research on this guy. Interesting that Hughes compares him to Vermeer, well we expect him to say something insightful don't we, but it's an apt analogy.

I wasn't familiar with Koch. Maybe powerhouse will republish this catalog, as they did "Take Ivy"?

Joe- On the red settee or the sofa?

PoePoePoePoePoe. That tintinnabulation you hear is the ringing of Fordham's bells. Nice images and congratulations on your growing popularity.

Anon- I haven't thought of Poe's, The Bells, in a very long time. Maybe the Trad is in the gold stage with brass quickly approaching. I hope not.

Ha, ha. I know, she's pretty amazing. (I watched Orlando again as a result at home.)

Interesting, Tintin, thanks for the informative post. Probably a hugely important Noo Yawk artist, painting his co-ethnics, and supported by them. One gets the impression he recorded the radical transformation of NYC and profited by it. Not my cup of PG Tips.

Hey!
What happened to HUMP day?!

does loving figurative art this much make me an absolute bore? can't help it... this stuff is amazing.

and i'm sorry, but when a move like I Am Love opens in Madison, Connecticut before Charlotte, North Carolina, it makes me realize it may be time to move back home after all...

....It was a Rohrschach moment


Holly said...
"but when a move like I Am Love opens in Madison,"

tintin screw the mall, we'll have to create our own 60's or how about the 30's....the trouble is most of the people I know are either boring and/or wouldn't have a clue what we're talking about.