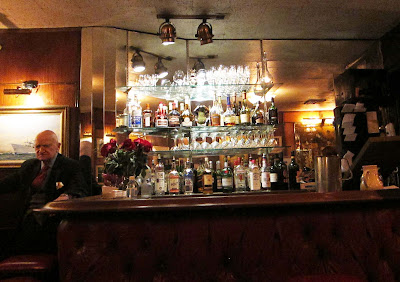 "You go from one place to the other and you bullshit." Robert Treboux 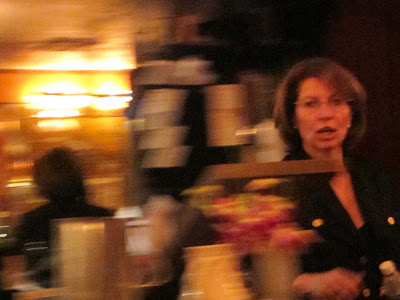 "It's not classic old - it's classic ancient at this point." Cathy Treboux


It's far from hip. Michael Williams of 'A Continuous Lean' thinks it's an 'old folk's home.' Maybe, but it has more heart than any restaurant in this city. I've taken a lot of people here and insisted a lot of people take me here. There's no place I feel more at home and I'm not from anywhere.

The first time I stepped down into the dark and, at the time, smoke filled room was in 1988 and it immediately spoke to the part of me that is always looking for... I don't know - It's hard to describe. It's: Wrigley not Comiskey - J. Press not J. Crew - Jumbo lump not Krab. It's not 'distressed.' Instead there's an honesty that's perfectly happy with itself. Know what I mean?

I've met authors here and magazine publishers, photographers, film makers, fashion designers, teachers, wine merchants and insurance salesmen. So far I haven't met anyone from the NFL or a reality show. They're all down the street eating in a place they read was cool. No, Veau d'Or is not cool and I suspect it never will be. For that alone Robert and Cathy Trebeaux deserve congratulations.
Posted by tintin at 08:43

I loved that place at my last NYC trip.

Everyone should go there, unless they're jerks, then they should go some place else.

Sean- Cathy never seems to hesitate suggesting other places for jerks - - of which I've been on more than occasion. Taking her picture will also get you thrown out.

I love that photo of Cathy. Tres moody.

I feel honored to have experienced this little nook of NYC.

It's great! Like if the French would have colonized the gulf side of Florida.

Alice- She was pretty goddamned moody when she threatened to kick me out unless I put the camera away.

ACL- That's pretty good. Who'd you steal it from?

My grandmother always had a particular respect for the French. French was her second language, after Italian and before English, which she never did grasp entirely. I used to think it was because they were as Catholic as the Italians, but a place like this makes me understand better.

I've still got fond memories of the bowl of mussels and bottle of Sancerre I had there. It tops the list of places to take the wife next time we get to New York together.

That nasty cheap bottle of white rum that they left at the table with us for dessert was the corker. That, and the haughty old waiter who was actually a really nice guy.

Good for them, they deserve it.

I'm sorry. I'm from the Midwest.
Does one get a relish tray with a choice of white, rye or Pumpernickel at this joint?
One needs a little roughage
to scour out the 5 pounds of prime rib or that 1/2 chicken with the baked tater with sour cream and bacon sprinkles that one just et.
This my friends is gastronomic Armageddon. Valhalla I am coming!

If I were to describe this restaurant and its virtues, and I mean the restaurant itself, I think the word that would come to mind is "milfy." It's a good thing.

i was there once and *Someone* kept farting the whole time... kinda ruined the ambiance... I know it's not the restu..fault but .. I just associate the place with farts.

Ok, Ok, you can take us here when we visit CT/NY the last two weeks of June! ;) But seriously, you can! DMW

One of the Last Great Places. I love it just as I love Le Petit Paris in Chicago and for many of the same reasons. The same tradly fellow introduced me to both.

Think I know what ya mean. In San Francisco see Tadich's and Sams...thank god we still got some real places..

Timless food has nothing to do with trends (or the people that pay more attention to them than what's on their plate).

Never been to L'Veau d'Or but I know timeless food when I see it. Old people do too. Younger people should pay more attention to them. They'd have timeless eating experiences if they did.

This sounds like a great little place. Of course I have never been there but it makes me think of a 1940's movie. The kind of place that I always hope to hell that the "cool" people never find.
If I visit, you better take me here... you will fit in well with the atmosphere.

We go to a restaurant that most people even my age would never be seen in, it's that far under the "hip" radar. Because of that the a**hole factor is non-existant. And for the waiters, that IS their job, not something to do until they find a career.

Here's to the un-cool.

Downtown Minneapolis cares even less about its past than Chicago.
There are only about two places that really predate the '80s.
I'm not a steak guy but this is the kind of place Darren Stevens would take a client.
http://www.murraysrestaurant.com/home.html

Or where you'd see Kid Cann having lunch every day.