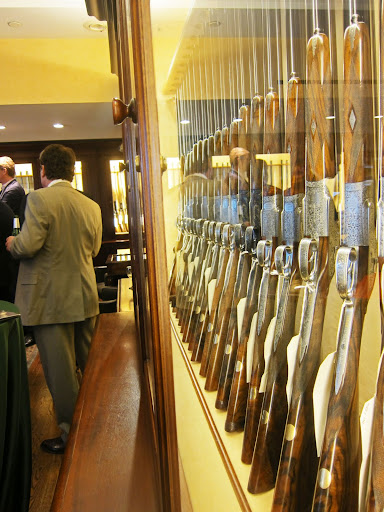 On the 19th floor of 10 East 40th Street is the Holland & Holland gun room. Gun rooms in NYC are as rare as places you can smoke. I'm always surprised how friends react to my love of guns. I don't know how many big city Republicans have told me the one thing we agree on is gun control -- only to drop their mouths when I tell them we don't. 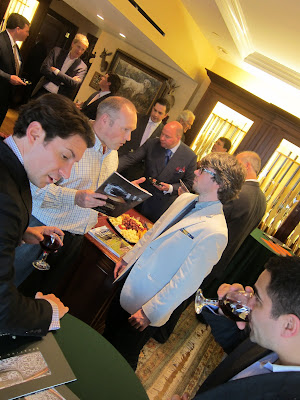 Last night some gun lovers gathered at Holland & Holland for Burgundy (white and red), wild boar sausage and some real estate investment advice which, being the only poor Democrat in the room, I never really understood. "Save, schmave, I want that 20 gauge." 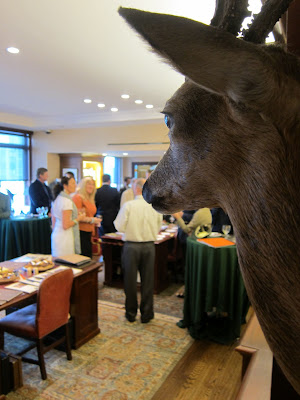 Everything about this room is tradition, and while I'm not into taxidermy it certainly suits Holland & Holland. 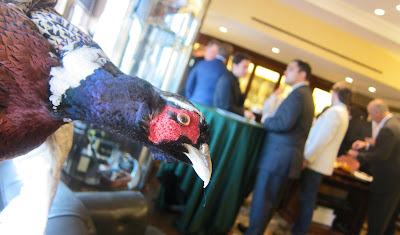 I was never much of a hunter until I was served a brace of smoked pheasant for lunch during a bird hunt in northern Illinois. I converted immediately. 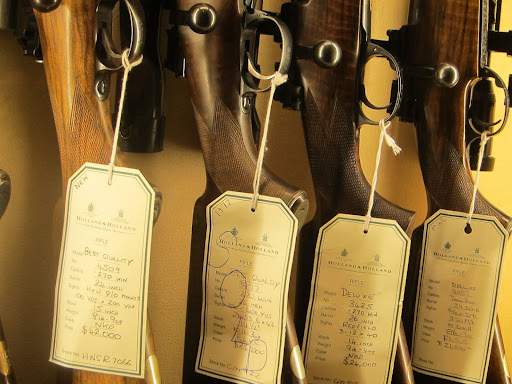 I don't hunt that much and I promised myself after the army I would never go camping again. My idea of enjoying the four seasons is checking into one. 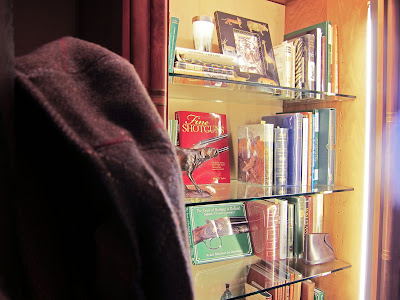 But the lore and history of guns speaks to the love of a well aimed shot. The smell of sulfur. The ejection of a shell and the sound of brass. The sweet banana smell of Hoppe's cleaning solvent... 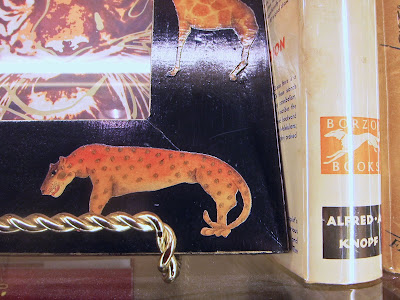 and all that goes with it. 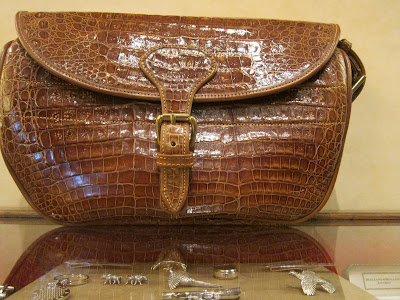 It's hard not to be impressed by the luxury of Holland & Holland. I have no idea what that cartridge box retails for. I don't want to know. 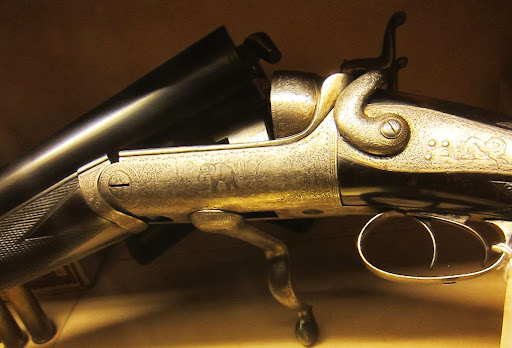 But the really interesting stuff isn't for sale. A small museum curated by H&H holds amazing treasures of history. 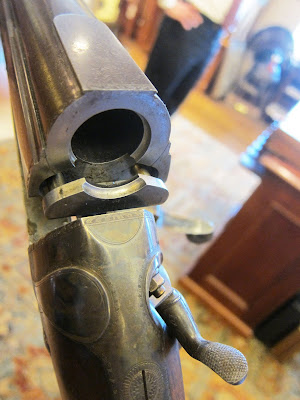 This is an 8 bore "Wild Fowling Hammer Gun' or what we would called in the army, "a B.F.G." 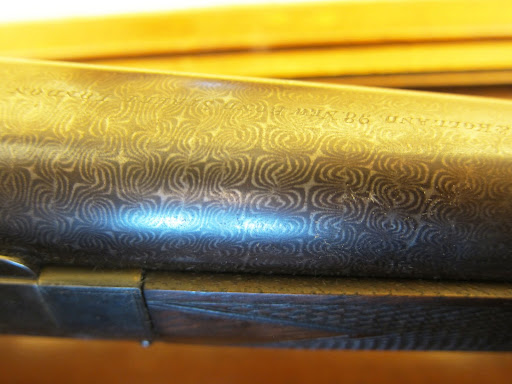 If you do work in fashion design and are still reading this...check out the imprint of the barrel above and below. This was done during manufacture and I think the same pattern would make for a pair of smashing batik trousers. 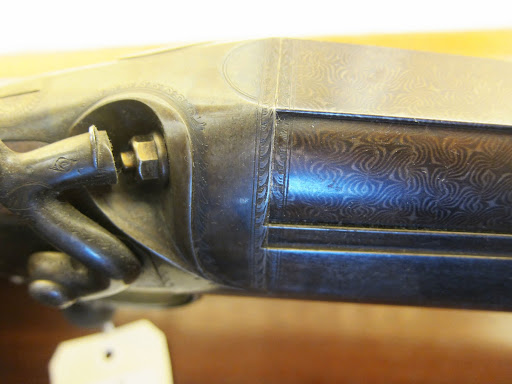 My favorite of the night was one of 10 replicas of the English Brown Bess. This musket was standard issue to the British soldier during the American Revolution or, what H&H might call, "The American War for Independence." 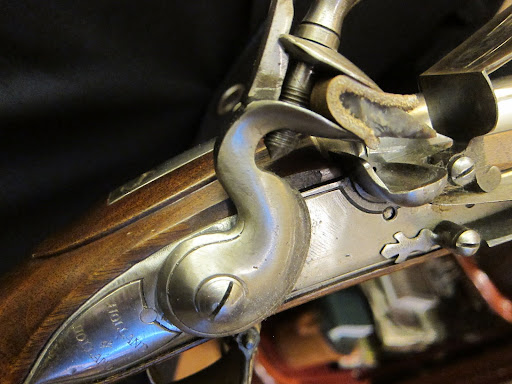 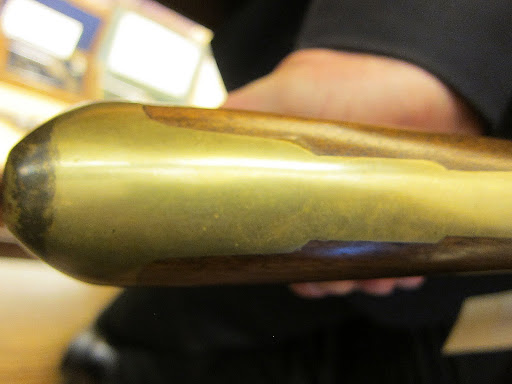 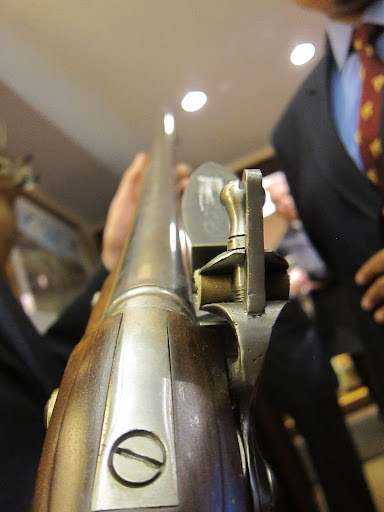 Now you have my full attention...this is a smashing post and set of photos.
Investment advice? They should have told you that a good double gun is a sound investment...
Anytime you want to take to the field or duck blind just let me know...and we are not camping we go on these excursions....rather staying at our well-appointed clubhouse.

I share your view of taking in the four seasons. Totally.

Man... you made me miss walking through sage brush with my broken barrel over-under 20 gauge/.22.
I miss swabbing out the muzzle loaders with Dad making the house smell like fireworks, but mostly I miss venison and buffalo steaks.

Happiness is not sitting in a Duck blind nor is it sitting on a deer stand. ZZZZZZZZZZZZZ.
Pheasant hunting is Ok.
Used to like to hunt but not much anymore.

Any oysters at that party? You didn't mention the unique patina and tone of gun bluing. Charvet might be able to make something close. Pheasant you say? Try a soup made with pheasant, smoked or not, with plenty of root vegetables. You will never look at chicken soup the same way again. It's a good way to use up the left over bones and sinewy legs.

True story: I have an older brother who is a Beatles fan. When I was in kindergarten, during arts and crafts, my really pretty, I mean haaawt teacher Miss Burns gave us an assignment: paint a picture to complete the sentence "happiness is..."
With the song in my head and Viet Nam on the TV, I of course painted a picture of a warm gun. You know, a wagon wheel yellow sun, something that looked like my G.I. Joe's M1911 .45 in black with extra heavily checkered grips, grey smoke curling from the barrel. Controversy ensued amongst my less than hip teachers and parents. It took at least a week or two to blow over.
At the end of the school year Miss Burns got married and moved away. Broke My Heart. Memories of 1972. I was five years old.
She did come back for visit and made a point of finding me when I was in Grade 4. At least that was something.

This stuff is nice of course, but I wouldn't trade one shot from my Remington 870 for it.

I'd bet the farm that most of the folk selling and buying from H&H shoot clays ... and little else. Not that there's anything wrong with that~.

So are you a hippie pinko Commie who wants to take away our guns, or are you a wild-eyed gun-toting wacko who wants children to shoot each other with readily-available eeevil handguns?

"The sweet banana smell of Hoppe's cleaning solvent" - love it, all infantryman do!

Incidentally, H&H also worked on the No4 Mk1 (T) which was the standard sniper rifle for Commonwealth forces in WW2 and Korea.

The patterned barrel is not imprinted. It is far far clever than that, layers of steel are welded together to make the smaller pattern, the different steels giving the lighter and darker effects and this is formed in to a very long rod. The rod is the welded in a spiral to form the barrel.

The skill needed to smith something like that is almost unbelievable. Google Damascus Steel or Pattern Welded Steel.

Alice- George Michael fans are rarely into sleeping under the stars.

Bro- I love flint locks. Especially the Brown Bess. Plus, you know you can't hit anything with it.

unclelooney- Growing up I loved watching ABC's, American Sportsman and really enjoyed the safari stuff. Today, I'm amazed at how boring and backwards the hunting shows are. Some guy sitting in a tree stand dipping Coppenhagen and whispering to the camera.

Oyster Guy- Sorry, no oysters at the party. They're difficult to eat with a tooth pick. Love the story.

KA- Would that make a gun loving democrat a DINO?

GSV- I used a Rem 810 as a depty sheriff in FL. I loved that thing. Trad Dad used a Browing Auto shotgun in Vietnam. He called it the crowd pleaser.

Family Man- I'm covering hand guns next week. I guess I'm a gun toting liberal which is why I never feel comfortable anywhere.

Trad-ish- That's interesting. I'm learning more and more about H&H and am amazed with their history.

tomtom- Thank you for the link and for clarifying the process. I'm still uncertain how this is done but am hugely impressed.

Unfortunately, it's become cartoonish on all sides.

On fashion and politics
http://www.youtube.com/watch?v=EQkRF5EX3vw

I love Holland & Holland's work, it has been so long since I have been in their London store, I think you just inspired a visit :)

Do they have those great Boxing Hare neckties at this location?