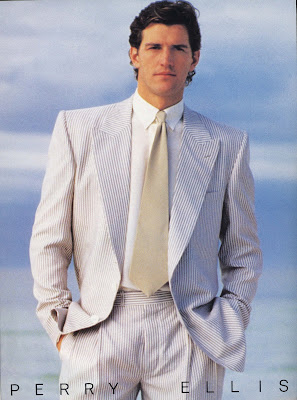 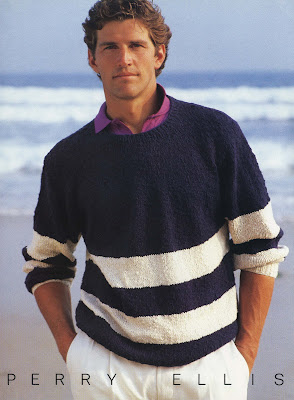 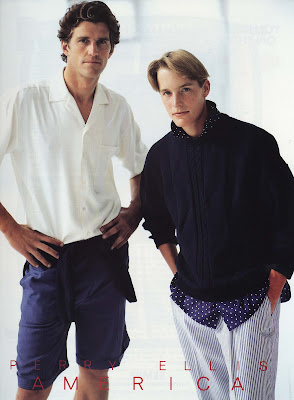 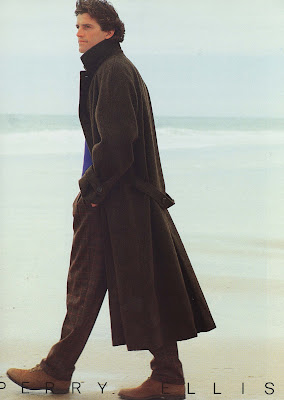 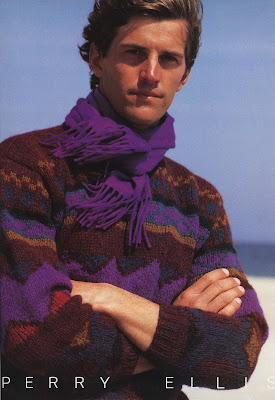 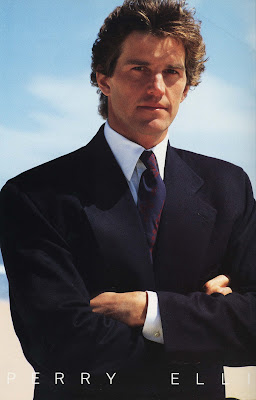 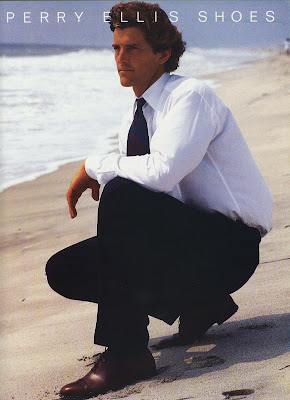 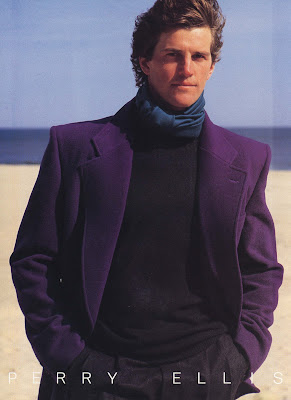 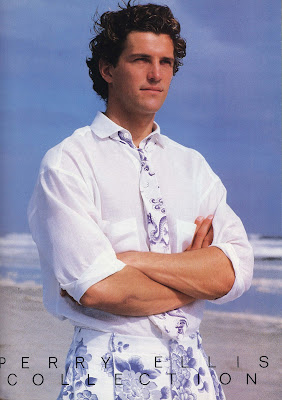 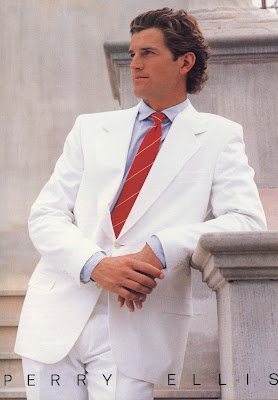 I'll have one in each colour please.

Amazing. I was an M magazine subscriber and would wear any of those things 25 years later

Is that you? What a stud!

I loved M magazine but this is an example of eighties wrongnacity. It's...it's Disco Trad.

Ps...Who the hell is that Longwing guy who commented?

Pss...my word verification prompt for this comment is nookee-I kid you not.

Twenty-five years ago. It's no accident the editors wanted the model they got. John Kennedy Jr. was just coming onto the scene in a big way and everyone in media and advertising was jumping on the bandwagon.

I like the idea of a suit at the beach, but then think about the sand in the cuffs, shoes, possibly in the coat pockets. I can't get over the shoulders on the jackets. "Flight attendants, prepare for takeoff."

M Lane- Not bad. Beats that clown outfit ADG came back from London with.

Dad- That's the point vs what they're selling today. Amazing stuff. I forgot about it.

longwing- Thats my older brother. I'm short, fat and fair. He's tall, dark and like you, keeps starting blogs and taking them down everytime he gets a new piece of stereo equipment. I don't get it either.

ADG- Disco Trad? That would make you and your Wicked Witch of the West Socks just who exactly? Remember duende and not cursi. Word is you're gonna take Williards place doing the Smuckers Mothers on the Today Show.

DB- Maybe. I dunno. The earliest of these is '84. PE did the same model on what looks to be the same beach year after year.

It's not just PE but I am often surprised just how well so many of the M ads have held up.

Style over fashion I guess.

You may be short and fat but you ain't fair. Those are very unfair and hurtful things that you've said about me. I'm now going to don my light purple flannel britches, orange ankle socks, navy blue weejuns, a mesh tank top and drown my sorrows.

Apart from Lapel widths (one of the industry's standard games) these could be worn today....the color palettes can be found on Sart. if you want to check....forget fashion forward....stick with the classics and your kids won't laugh at pics of you taken 30 years before!

The shoulder pads are unforgivable.

Still trying to forget, but thanks anyway.

I love a man in an un-ironic purple topcoat. I mean, that guy is playing it so straight you almost forget about The Joker.

That model is a bit Ted Danson, a bit John Kennedy Jr. . .for all the unforgivable 80s fashion disasters, this is not bad at all. A little tweaking and it would work on my man.

You could put solar panels on those shoulders.

The basic styles are the same, but the stylization of them is too much for me.

Best part of this post? Wicked Witch of the West socks.

Speaking of word verification - I just got "distiati". Sounds like 90's punk kid version of the Illuminati.

The model was Matt Norklun. God I miss real PE stuff. It was all beautifully made too.

That PE still looks good. I wore a lot of him in the 80's when I started working in architecture. Best was a heavy dark blue tweed sportcoat with little flecks of purple, red and I-don't-remember-what other colors in the weave. There was a movie with Glenn Close and Jeff Bridges where she visits her soon-to-be-ex husband at his architecture firm and he's wearing - Yes! - my sportcoat. Art Imitates Life.....

Ooooh I sooo remember that model. He was everywhere at the time. Would love to see what he looks like now.

Look for the guy with the grey hair and beard.