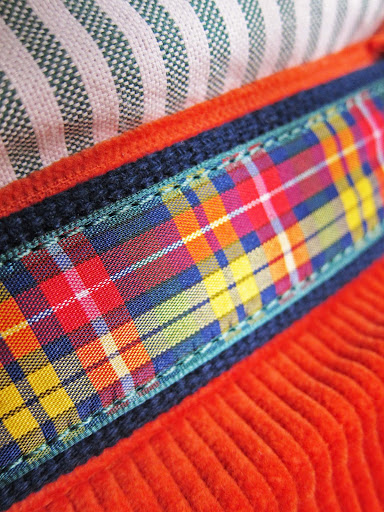 Hands down my favorite Leather Man tartan belt. The Buchnan pretty much goes with any color because every color is in it. The orange cords are Italian, washable and they'll get you a free coffee at ING Cafe on Friday. The Golf Foxtrot threw them in the dryer and now they're very hi - water. And that's ok. They're perfect for slushing through NY winters in LL Bean Boots.
The other Friday belt is an opportunity to hoist my frugal flag: Brandy. Decaumont has been aged 10 years, it's made in France and can be had for $15 to $20. It's softer than a VSOP cognac at a third of the price. Perfect for mixing. Legend claims the Sidecar cocktail was invented during WW I in Paris by an American army captain who rode in a motorcycle's sidecar to the bar he invented it in . That makes me so proud.

It's classic and like all things classic - it's simple. 2oz of Brandy. 2oz of Cointreau. 1oz of fresh squeezed lemon juice. Shake with ice and strain into a chilled martini glass. Tart and sweet with cinnamon undercurrent from the Brandy. It's amazing.

I remember hearing old folks order these at a road house just west of Lake Bluff, IL on 176. That was 1990. Now I'm old folk drinking 'em. In my hi - water orange cords. Life is going by fast and like my father told me...it's just like a roll of toilet paper. The closer you get to the end - - the faster it goes.
Posted by tintin at 05:43

Great combination of textures, colors, and patterns--classy in a word.

And from the girl that sips on drinks her daddy and grandfather prefer (while her 21-year-old guy friends smile and shake their heads), I loved the wrap up of this post.

Really a great F.B. I love the drink and the history of it. Glad you omitted the all too common "rim of sugar" on the glass. An abomination.

By the way you have an almost superhuman fearless streak when it comes to colour in midwinter, I salute you with a double gin gibson like a strange new flag.
Alas gold cords tatersal shirt and tweed sportcoat is how i spend a friday afternoon.

I have enjoyed a few of these in my day...a few too may on occassion. I must report the hangover they conjure can be legendary...like you need a sidecar to carry your head in for the day. Good poston a classic cocktail.

Sweetie I need to know more about these pants.....ME

The Roadhouse is still there and they have fish frys as well where they serve all you can eat Walleye. I think the staple drink though is regionoal beer.

Drooling over the drink (on the wagon for Lent), plain terrified by the tangerine trousers. For pity's sake, don't stand next to you know who in the lemon jobs.

Red Velvet- I agree but whenever I do this I find it more difficult to get up.

Ashlyn- I'll take classy in a word. It's better than Joe Shit the Ragman, which is what I'm usually associated with although thats more than a word.

M Lane- I'm lazy. That's why I left it out. I don't have to time to screw around with a sugar rim. Gee, that sounds like a sex act.

Spalding- I like color a lot. It's not so brave in NYC where there's some pretty far out stuff. However, and I've mentioned this before, it would be another story in Jacksonville, FL.

JRS- I'm starting a new blog of only toilet paper sayings. I'm sure that would get me a book deal.

Main Line- You are correct, sir. It's that damned mixing.

Anon- My road house brurned down in '92 or '93. It was owned by DT who owns the Lantern (Lake Forest) and he never rebuilt. Instead, he threw a wad of money into the Lantern forever changing what was unique and charming.

Spalding - damn, started already though am knocking our pancakes for everyone else.

You're on for next year though, am smitten by 'pancake bender' - are you from my college??

Just Googled the brandy...The Trad was the first result! You should be so proud. Did you know that McCormick's isn't even out on 176 anymore? Some Mexican place now...ironic isn't it?

TRB- No kidding. Hey, do you remember the name of Tiffany's place on 176 that burned down?

That place was jam packed with 65 year olds from Lake Forest drinking sidecars, stingers, whiskey sours, etc. I loved it.

Was it Art's Old House?

That was it! Man, that's been driving me crazy for years. And I should be ashamed. That's a name I should remember.

Love a sidecar. Walked out of a popular bar when they asked me how to make one.

Easy and Elegant- It's a great classic. We need to invent a cocktail called the Caisson. Maybe a single serving of Artillery Punch? Hmmm.

Tintin, I am up for the challenge. Let's see, a Howitzer is a French 75 with added bourbon... the ice cube for ours should be what 75 mm hand formed?

Whatever it's going to be, it should have a devastating effect after a single shot and require that you be carted home.