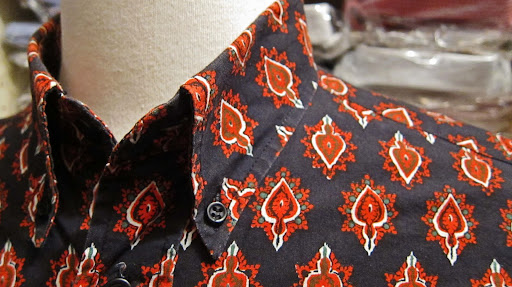 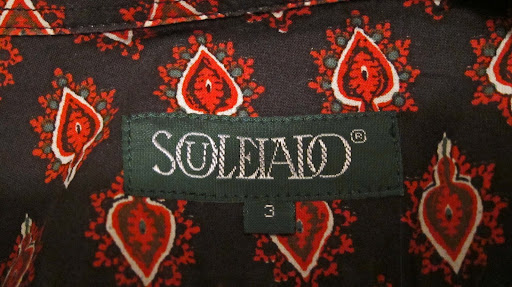 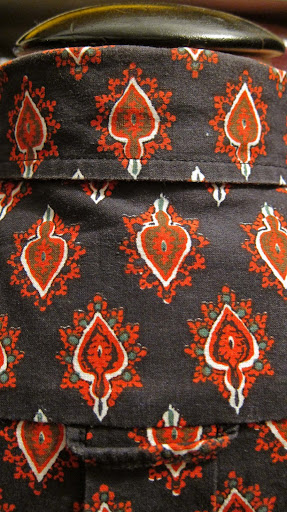 Who knew the French have lockers? 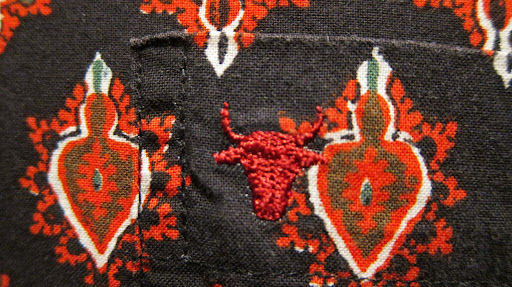 A year ago the Friday Belt seemed like a good idea. 15 extra pounds later I'm not so sure. I've decided to climb on the wagon. The Friday Belt returns in six weeks. In its place - "Off My Back" A weekly look at shirting old and new. Strange and common. Cheap and expensive. US and UK. We kick it off with something unique, traditional and about 105% French.

I was first introduced to Souleiado patterns by Pierre Deux. Then I found a small shop in Bermuda that carried their men's button down shirts. Called Provincial shirts, they're made of 100% cotton in hand block printed designs over 200 years old and they're as traditional and unconventional as you can get.
They're hard to pin down. Certainly it's rustic. Simple like a young red wine from Provence...Whoops. Can't go there (This is gonna be a long six weeks). But they're so ancient looking and that comes from the patterns that are actually printed onto the shirts using old wooden blocks.
I actually wore this shirt on casual Friday a few jobs back. Show up in a shirt like this - people talk. My boss is standing in front of me in a pair Kenneth Cole squared toe shoes, Dockers and a ten dollar haircut. He asks, "Where in the hell did you dig up a shirt like that?" And I replied, "The south of France. You wouldn't understand." Yes, he eventually fired me but he'll never understand the chemise aller a L'enfer.

It's the kinda shirt you wear without a tie. There's a lot going on here and I'm always afraid someone will mistake me for a professional card player. Best worn in French owned restaurants. At least they understand the origins. Of the shirt - not me.
Posted by tintin at 06:23

Labels: GTH, Off My Back, Souleiado

I like it. Sort of like a French version of batik or madras in terms of rustic style. I would think it would work best in Spring or Summer with light colored pants, but maybe I am wrong.

Souleiado, wow that's a brand from the past. Those print fabrics were all the rage in the early 1980's.
I'm a little surprised that you wore a shirt with a "hanging out in a cafe in Cassis" print to work.

hahaha, america is ripe with square toes and ten dollar haircuts. screw those guys. they're the ones who are ruining this goddamn country. at least before they were buying usa made clodhoppers and getting haircuts at a barber instead of supercuts. I hate their smug little smirks proclaiming to world about how much money they've saved by selling the soul of america. they are fat and happy like a pig in shit, using coupons at the super wal mart.

Tintin,
First comment I leave in a long time and the word verification calls me a a fat ork. About the shirt, I want to like it. I'm really trying hard to like it, but alas, I don't. Alternatively, it would make a great placemat. D

I liked the Friday Belt more for the cocktails than the belts. It's been foggy as hell around here lately so I'm picking up some Pernod for a Foggy Day this afternoon.

"Alternatively, it would make a great placemat. D"

....Or an Antimaccassar for those Lazyboy American ugly chairs?

I like this shirt, and am always happy to learn about anything cool and French. Reminds me of Amadou and Mariam, which I will dig out and listen to this weekend.

Tom- I have the same pattern but on a white background for summer. I wear this in winter with jeans or black cords and a green v neck sweater.

Belle- I do a lot of stupid stuff like that and I have no idea why. Probably has something to do with why I'm doing this.

D - So good to hear from you. I think it helps to have a screw loose to really see the potential of this stuff.

Since the authentic shirts are impossible to find nowadays I'm looking at some Souleiado material to have a couple shirts made.

I have always wanted a Citroen 2CV just to cover the seats in blue and white Souleiado fabric.

Simon- I got an archive that should keep you busy for six weeks.

Joe- Funny you should mention that.

Cathleen - You are a woman of taste and style. Love Amadou and Mariam.

"Joe- Funny you should mention that."

.....Don't tell me you're the proud owner of one and destroy my faith.....arrrgghhhh

Hmmm...I like it. If someone gave this shirt to me as a gift, I would not return it. This is a shirt to wear strolling along the Promenade des Anglais, with a pair of JM Westons (w/o socks), cravat, pack of Gauloises, and a young French beauty on your arm.

Joe- Not in a NYC apt. Those are like having an aircraft carrier in your living room.

LBT- I need to get me one of them French beauties.

Either I go on a hunger strike until Friday Belts comes back, or I start posting my own.

I doubt that I can muster 5 weeks of material. I'll be at canned Hi-Life Light and Gap Brown Leather Jeans Belt in no time.

P.S.
I like the shirt. It looks like something James Bond would wear on his way down to the hotel pool.

Just wanted to say thanks. This something new and I appreciate you introducing it to me.