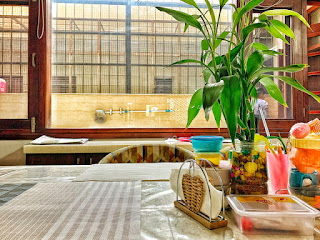 My napkin at the table

Rather than knock, many Indians turn the locked door knob back and forth as a way to let you know they want in.  It’s unsettling when it first happens. Especially when you open the door and three strange men are outside with the apartment manager who looks very uncomfortable. In fairness, he always looks uncomfortable. Whether he waves good morning or trying to tell me in his limited English the elevator ain’t working.

The three men want to see my apartment.  One man points at his eye and says, “Look, look.”  It’s almost 8pm and I’m saying to myself, “this is not good.”  Well dressed terrorists comes to mind but I scratch that and looking at their height assume they’re cops. I let them in. They look around quickly, exchange a few words amongst themselves in Hindi and leave.

I found out the next morning they were prospective buyers of the the apartment building. Suddenly, memories of countless real estate agents knocking on my various apartment doors reminds me that people are all the same.  The good and the bad.

There are pigeons outside my bathroom window who coo, purr and squak.  They drove me crazy for the first week. The window is frosted and I can only make out their shadows as they flap against the window. I take my four minute shower because that’s how long the hot water lasts and while using bottled water to brush my teeth, I hum The Beach Boys, Don’t Worry Baby.”  I spent a glorious summer with a girlfriend in Florida having sex everyday and listening to The Beach Boys afterwards, a cool breeze blowing thru her bedroom window and landing on our naked bodies. That was the Summer after I graduated high school.

This is Spring in India. And the pigeons, still outside my window, don’t make a peep. Every morning I hum a Beach Boy’s song and they keep their mouths shut.  It’s my 23rd day in India and I’ve sung to pigeons, had my four minute shower, an orange, some honey and a malaria pill with bottled water for breakfast.

I’m invited to the home of my host for lunch, as I have been almost every day.  His wife, parents, sister, two children and cook along with a caretaker are in serious discussion. While it’s Hindi, I can tell something is wrong. I kick off my shoes by the door and greet all with a poorly pronounced Namaste. Their reply is with smiles but they’re wooden and tight. I sit at the table and all discussion continues in Hindi. I want to ask, “what’s up?” But I don’t.  I assume my host will speak with me privately and so this lunch drags on while they speak quickly in a language that sounds Italian one minute and Japanese the next.  I hear ‘American’ buried in the rapid fire Hindi more than once.

I push flat bread into a pile of potatoes that look just like hash browns. With thumb and index finger I clamp the bread around the potatoes, pick it up and stick it my mouth dropping a couple in my lap. I’m the only one at the table who uses a napkin because I’m not good at eating with my right hand. I also remember I forgot to wash my hands but figure pushing buttons on a elevator and opening two gates isn’t going to kill me. Or will it? I’ll find out in 14 days.

These people are warm and generous and sitting at their table, I am aware they’re just like everybody else I’ve ever had a meal with. They have the same problems as everyone in the world right now and I feel the 7,599 mile difference for the first time.  I really am on the other side of the planet and it makes me feel lonely. And then I think of The Beach Boys and the pigeons and the lyrics of Don’t Worry, Baby.  And I feel better...just as slices of chilled mango are piled on my plate.  Who in the world doesn’t like mango.
Posted by tintin at 00:26

Glorious. Are they plotting to kill you and steal your dollars? I’m guessing not because they are feeding you delicious things. You need a crash course in Hindi. Unless they really are speaking Japanese abs American, in which case, as my granny used to say, keep your hand on your sixpence.

Oh, and the hand? Wash. Both of them.

Thank you, dear. I must start Hindi lessons soon. But writing comes first.

You have some nerve, just popping up here like this after all this time;).

I’m so sorry. I should’ve called head of time. L

Glad to see you back!
I hope to hear more about your Indian adventures.