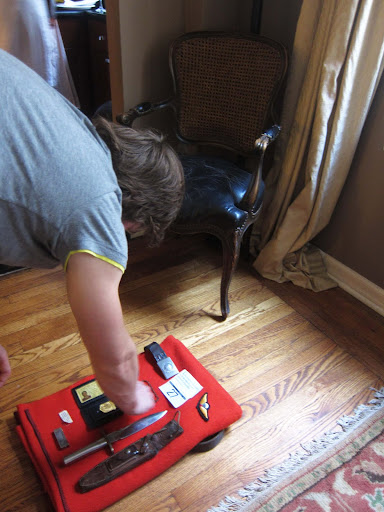 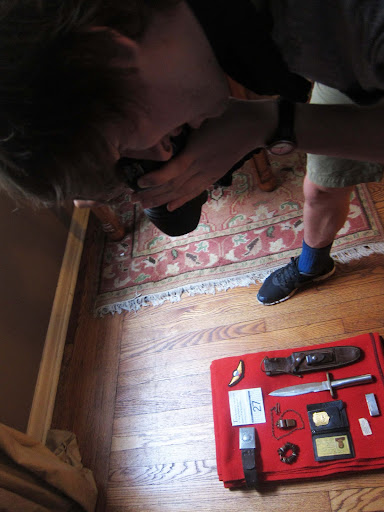 Foster Huntington created a blog last month and came to me for advice. I have an email from April 13th documenting my fear "The Burning House" might be considered silly and shallow. I suggested too many responses would ring of, "I'd grab my Purple Label suit, Rugby tie and double monks 'cause they're so awesome. I wouldn't worry about socks 'cause I never wear 'em."

Foster came back with, "Maybe the title is a bit intense but it's the idea of neccesity weighed against aesthetics weighed against sentimental attachment." To which my gut told me and Foster, "I have no idea what works with blogs. Donald Trump will probably be elected president so my insight into intelligence and taste are usually wrong.

Foster's blog has been an overwhelming success with attention from the NY Times, NY Magazine, NPR and as many as 40k visits a day. There was even a spoof blog, "The Burning Asshole" which, while just recently shut down, was pretty damned funny if you don't take yourself too seriously.

Foster asked if I'd contribute. Pretty hard to argue to with his success. He came over and I shot him while he shot me. This may seem very hipster-ish but I remembered doing pretty much the same thing 30 years with a best friend and photographer who comments on this blog (DB) today. This 'stuff' grabs something in us. Whether it's history, family or, and sometimes this is all it is, just something that looks cool. As much as I hate to admit it. Check out the blog here.

I'm afraid to ask too much about what that knife has seen.

And you'd think he'd be sore from laying all them golden eggs.

Hey, at least he answers your e-mails.

What a great idea.....unfortunately, all I can think of is how badly I need to organize my things. I may create a space in my house this weekend with an "In Case of Fire" section...

Tintin, I think the site taps into universal themes: who hasn't thought about this to one degree or another? It's a great idea for a web site because it's visual as well as thoughtful. But most importantly, it invites the reader to participate & bestows a kind of sacredness to one's choices. Your site is thoughtful in different, yet equally compelling ways.

I know this is going to sound ridiculous but I'm saying it anyway.... I checked you out on the Burning House... and somehow I was surprised. I forget how entrenched the Army is with you. Clearly I focus on tailoring, music, relationships, style... when I read this blog!

I've had to pack up from a burning house (twice), well the threat was there from bushfires, and I chose my camera and my negatives.

Bro- Nothing bad at all. It was presented to my father after Vietnam and presented to me for Panama. I cut a lot of sugar cane and trees with that serrated edge. Nothing much else.

GSV Jr- The kid has huge talent and heart to match. Plus he's a pretty good shot.

Anon- It's in the knife handle.

Justin- I sure as hell have given it a lot of thought. That and if I could survive going down my building's garbage chute.

Alice- As Ann mentioned, I wouldn't take the time for anything less than what had a sacredness. Everything here can be replaced but the objects carry stories and family history. I don't have a bow tie or suit that comes close.

GSV JR, when have you sent me an email?

thanks for the kind words everyone.

The very first thing that really caught my attention regarding your blog were your posts and references to the Canadian Airborne. I kept wondering who is THIS guy? Definitely a cut above the average American fashionista. And here it is again, in your bug out bag no less! I have to ask how this has come to loom so large with you. Is there some unusual personal significance or story to go along with it or is it just a bit of distinction among a mass of All Americans and your own family tree ? Please forgive my greed but what's the really going on here Tintin ?

tintin- As a relatively indecisive person, I would probably burn to death trying to decide what I should take....so planning ahead is a must!

I have a story of sentimental attachment to a "Gott mit Uns" belt. I spent a couple of days on a farm in Scotland once, where German POWs were kept to help with the farm work. The family who owned the farm got to be friends with one of the POWs. After the war, this POW went home, and then he reappeared 30 years later to give the family his "Gott mit Uns" belt, saying he believed that it had kept him safe during the War.

thanks again for contributing john. yours is one of my favorites.

I dig his site, beautiful and stark photos- though it's a bit rife with fashionista hipsters- he need to cast wider net.

"This may seem very hipster-ish but I remembered doing pretty much the same thing 30 years with a best friend and photographer who comments on this blog (DB) today." Love it.

Foster- There's some good advice here from my readers. That should make up for the bad advice from me.

Oyster Guy- Nothing distinctive at all. I was selected to attend Canadian Jump School like a lot of yanks. It was a reward for a job I don't remember doing well.

First and last time I ever got to "Stand in the door." Drink Labatts Blue and smoke Export A's. Hang out with some of the funniest people I've ever had the pleasure to know. Make 6 jumps in one day. Fall in love with Edmonton. Witness the weird French - English stuff. Throw up on a jump master at a prop blast. Ride around Edmonton in a British Army Land Rover driven by a drunken Lance Cpl from the 22nd SAS ("I'm fine...all I gotta do is follow the curb, mate"). And after meeting a girl my last night there who was a spitting image of Linda Rondstadt (in the 70s), I seriously thought of going AWOL and never coming back to the states.

Justin- I'm working on a go-bag myself.

martylane- I know a lot of German POWs picked fruit in Florida during WW II. It seems a great story that no one has ever written.

Foster- Then why didn't you mention me on the radio?

DB- What did we call ourselves then? Oh, yeah. I remember. We didn't call ourselves anything. We just went ape shit over a few things and made fun of most things. Do you still do the fly impression with tennis balls for eyes?

You're exactly right, Tintin: we loved a few things and found almost everything else to be funny, sad or dumb.

Haven't done the fly in years. Will have to do it for my little one.

I wonder how people who have been through actual house fires feel about that site...not to get all Mother Theresa or anything.