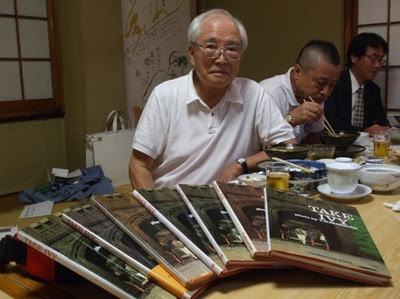 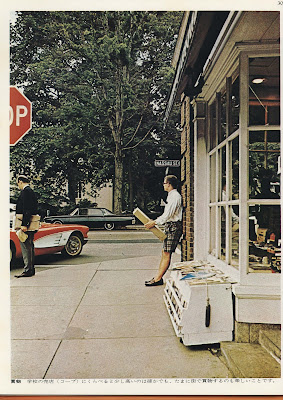 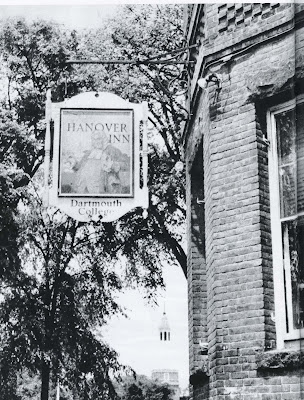 A favorite town of Hayashida 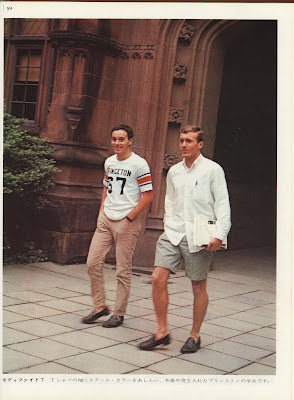 A favorite image of Hayashida 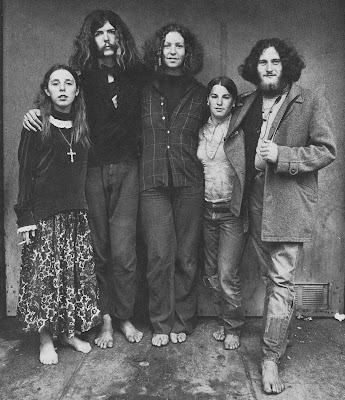 In part II, The Trad reporter confirms existence of the Take Ivy 16mm film, Hayashida offers style advice in dressing simple, Trad rebounds in the '80s after a Vietnam lull and the photographer reveals he's been visiting US college campuses for 30 years.

The Trad: What did you do for meals? Did you go to the cafeterias?

Hayashida: Yes, we went to them all. If you don’t visit those places you can’t take photos that convey the atmosphere and scent of student life.

The Trad: Is that why there are several cafeterias in the book?

Hayashida: Yes. I’m really proud of those photos. If you look, these photos have a special ambiance because of the fluorescent lights. It’s a particular kind of light. Actually seeing these places was a kind of revelation.

The Trad: Some of the photos are taken from behind the cafeteria counter.

Hayashida: I went behind the counter without asking because I was trying to document something without it being unnatural. There are times when you can do this - when you know it’s OK without having to ask.

The Trad: Do you have any memories of what the cafeterias were like – the ambiance and the meals?

Hayashida: Dartmouth’s cafeteria was huge. There was a place that had two or three cafeterias and some of the walls were made with marble. Harvard was also something else. Faculty and students ate in different areas.

The Trad: Do slides or negatives of these photos still exist?

Hayashida: Yes, they exist. But searching for them would take some time.

The Trad: I’m aware of interviews in the Japanese press but have you ever done any with Europe or the US?

Hayashida: No, this is the first time and I’m really happy that I’m able to do it in Japanese. It makes me very happy to be understood.

The Trad: Perhaps the significance of this book is that it witnesses an America forty years ago which longer exists.

Hayashida: I always thought this book would last. When I look at these images today they don’t appear to be old. Rather, they actually seem new to me.

The Trad: Did you work alone shooting photos or were others helping you?

Hayashida: I mainly worked alone but Paul Hasegawa was with me sometimes to help with English. The campuses were large and I moved around a lot. There was also a film being shot at the same time.

The Trad: Is this the film titled Take Ivy? I’ve always heard of this but what is it?

Hayashida: There were two negatives of the film and one went bad. The other remaining negative recently resurfaced.

The Trad: Is it stills from the book or an actual motion picture?

Hayashida: It’s completely different than the book. We traveled together to New York, split up to film and shoot, then met up again on the way home finishing the trip in Hawaii. The two works and their images are quite different. The film isn’t solely concerned with fashion. It’s different than my work but it’s really good.

The Trad: What's the soundtrack like? I’ve heard it's jazz.

Hayashida: I really don’t know since we didn’t work together on it. I’ve had other people ask me the same thing but to be honest I’ve only seen it a couple of times and that was long ago.

The Trad: Returning to the book, you mentioned that it was your policy not to ask people to pose preferring to capture natural images. Were you ever asked why you were taking photos?

Hayashida: Many times but because I don’t speak English I couldn’t reply. Paul always spoke to them and I would just continue to work or move equipment around. What’s the name of the school in New York?

Hayashida: That’s right. When we were working at Columbia, it’s a big campus, and a lot of people came up asking us what we were doing and a guard also came over and asked what was going on.

The Trad: But you had permission from the university, right?

Hayashida: It seems we didn’t do that at Columbia. But Paul spoke to them and everyone said, “Fine, fine,” and it wasn’t a problem. I seem to remember we talked about how beautiful the campus was and whatnot.

We didn’t want to say anything strange or untoward so we wouldn’t have to go the university office. I haven’t thought about this in years. Good questions help me remember things I just wouldn’t think about otherwise.

The Trad: Sometimes questions from a different perspective can refresh the memory. What do you remember about traveling between campuses? How did you travel?

Hayashida: We traveled by car and by bus. I didn’t handle the logistics for that. The others who worked for VAN did. For example, going from New York to Princeton, we took a regular public bus – the kind with a fare machine. For other schools further apart we used rental cars.

The Trad: Did you ever have any problems in moving from place to place? Like getting lost or breakdowns?

Hayashida: No, not once. We hired cars with a driver so we pretty much got where we wanted to go without any problems.

The Trad: Are there any photos of the American landscape not included in the book?

Hayashida: I’m sure there are a few. But we were always moving with the plan to get to the next place. In the town where Dartmouth is located the main street is very short - - perhaps a few hundred meters long. But there are a lot of interesting buildings and inns. I took photos of those kinds of things. And cars. Look at the images of the cars in the book. These are the kinds of cars that were still running at that time. There were some really amazing English cars. And the image of the Hanover Inn -- It’s beautiful.

The Trad: Do you remember taking the photo of the corner of Nassau Street? The one with the guy in madras shorts with the Corvette and T-bird in the background?

Hayashida: Many years later that photo was used for a clothing company advertisement. It was cropped a bit differently than it is here.

The Trad: The thing that is great about that photo is that it also contains the red Corvette and the Thunderbird. It really represents the era.

Hayashida: I intentionally tried to get a photo like that.

The Trad: The photo of the two students walking on page 59 is also a good representation of the Ivy spirit. What do you think is the key to dressing well?

Hayashida: Keeping it simple. There is a saying, “Simple is best.” Adding a bit of flavor or spice to one’s way of dressing is the sensibility that a man brings to it. That is my way of thinking and this is perhaps what I bring in my approach to photography. Before this, men’s photography in Japan wasn’t very good. There were photographers who were very good at setting the mood of a scene but it really wasn’t good photography.

The Trad: What did you think about the students at the time?

Hayashida: That’s a very good question. I’ve gone to these schools many times. Ivy really changed on account of the Vietnam War. The change was quite severe. When I went back after the first trip, I was very surprised. Things had really changed. People’s manner of dress was very strange and I thought, “Well, I guess we’ve come to this kind of an age.”

I came back without having taken many photos at all. It really wasn’t very interesting. During my visit I felt like a batter always swinging and a missing the pitch. That was a very interesting experience. No matter where I went, it was the same.

However, as I think about it, schools that were in smaller towns were different. For example, Dartmouth was still different. But it seemed like the Ivy style at schools in metropolitan areas had completely collapsed. There was still a bit of the old style, but the schools in the larger cities were in difficult circumstances.

I never thought that schools like Yale and Harvard would have changed so much. Men’s hair was long, and women’s manner of dress was strange. When I visited again during the Carter era, it seemed like there were more women on the campuses. In the past it had been almost all men and the campuses had a different academic feeling.

During Vietnam there were hippies everywhere and even though there were a small number of people in traditional dress -- things had really changed.

The Trad: What were your impressions when you visited campuses after this period?

The Trad: So you visited American campuses over a period of almost 30 years, from 1965 into the early 1990s?

Hayashida: That’s right. I made five trips over this period. I went twice completely on my own and friends in the States helped me with chartering transportation.

The Trad: Of those five trips which campuses did you visit most often?

Hayashida: The best was Cornell. It’s really hard to get to. I mean, it’s not far from Lake Ontario and Canada. We didn’t get there with the other authors on the first trip but I really wanted to go and stay there. It has a very famous school for hotel management, right?

Now that I think about it, I remember going there on a later trip and being greeted by a female student at that school who was dressed in a starched white apron. That was quite an enjoyable trip. I have photos of that somewhere.

Fascinating. I totally agree with "Simple is best." It applies to everything!

I also love how he noticed styles changing so dramatically because of the breaks in between visits.

It's a little spooky to see the pen cap poking out the top of pocket on the gent wearing the untucked white OCBD. The scale, placement and overall shape of it seems identical to Ralph's pony !

Do you think the Hippies were responsible for the current sloppy culture we have now? I was thinking of writing a book called "What Happened? why do Americans dress like slobs?" I think it would be an interesting piece of investigative journalism. Some blame Microsoft as well for inventing casual Fridays.

He should do another trip, and this time to a southern school like Washington & Lee or Ole Miss. The ivies are no longer as well dressed as before, and it seems a few southern institutions are the only ones left standing in traditional wear.

I am infinitely attracted to that photo you labeled "an era defined". You posted it once before. I keep seeing things in it. This time I noticed the old rusted window sash weight on a rope holding the magazines in place on the stand. Wouldn't it be great to peruse those magazines right there just as they were when this photo was taken?