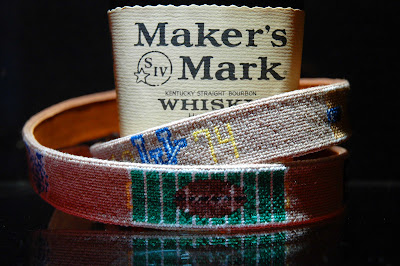 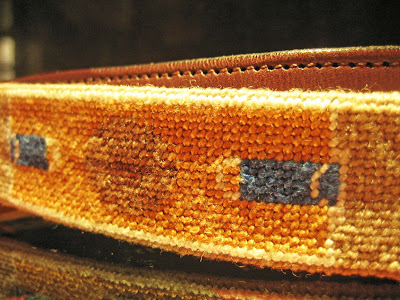 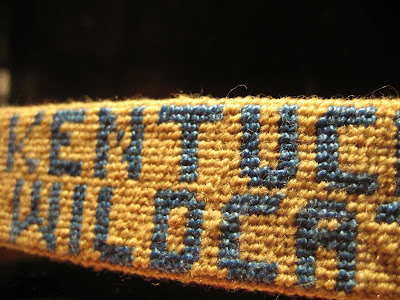 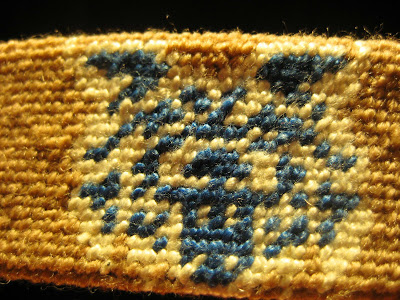 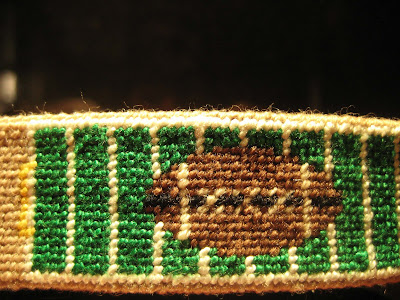 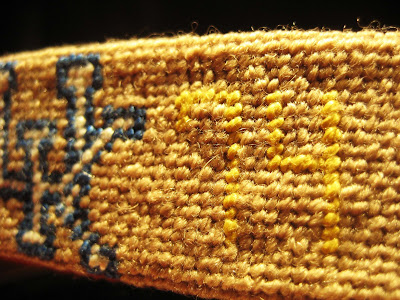 I fell in love with this belt. A hand made needlepoint done in 1974. I'm not a Wildcats fan but I do like the unique. I don't know the original owner or the artist but... I know this for what it is...late 20th Century folk art. At least to me. I'm probably ahead of the curve. How much is any one's guess. But I will guarantee you this. At some point in the future - - belts like this are gonna be in auction houses and snobby antique dealer shops up and down Madison. For now, we all get to play.
$25 all in. I figure the design is not a pattern but was created by the artist. Add to that the time it took and the beautiful harness and I have something that not only keeps my trousers up...I have a little piece of art. And if someone asks, "Hey, did you go to UK?" I'll say proudly, "No, I'm a collector."
And if someone asks, "Are you a bourbon drinker?" I'll say proudly, "Not really. But I write about booze and belts and I'm running outta both." Back in the mid 90's, I scored seats in the private clubhouse of the Keeneland horse track in Lexington, KY. I don't know anything about horses or gambling but I did notice some jockey the day before was always in the top three. So, I bet on this guy, Pat Day. I did alright. The clubhouse has a dress code and ties and jackets were required for men. Southern Trad was everywhere. And so were men ordering, "Maykah's Mawk and Coke all while flicking ashes off Marlboro Lights. I hadn't seen that much smoking since the Army.
Maker's Mark is a light and amazingly smooth bourbon. Mix it in a Coke and you can barely tell it's there. I tried it with Gosling's Ginger Beer (because I still can't find Barritt's in NYC) and it was too hot. Anyway, I'll throw my UK belt on this weekend and have a Coke and Maker's Mark. Hell, I might even watch some football.
Posted by tintin at 06:38

I never thought of needlepoint belts as folk art but you are exactly right!! Great belt.

AND, I do love bourbon (as you may expect) and MM is a very good reasonably priced brand. It is probably my favorite bourbon. I almost fell over when reading an interview with Catherine Deneuve in the NYT and she was drinking a bourbon sour. It confirmed that she is my perfect woman. Im not sure if she was wearing a belt.

i am making my own ginger ale/beer its pretty easy, what.

How appropriate. My husband is on a work trip to Bourbonland this very day. Let's hope he makes time for the Trail.

those of us that reside in the south rep. for Makers Mark all day, especially the mornings before tailgates...

some time ago, i was at my local liquor store, and one of two men looking at the liquor selection, suddenly exclaimed, "ah, they have mother's milk!". curious as to what liquor could be branded "mother's milk", i turned to see them reaching for the maker's mark.

If you're drinking bourbon and wearing a UK needlepoint belt then you're living in my world, tintin.

UK beat Florida in '74. They probably won't tomorrow, but having you wear that belt just might bring them some luck. Couldn't hurt.

TinTin,
I like my MM neat in a brandy snifter or on the rocks. I'll let you in on a little secret - the ONLY distributor of Barrits in New York in Demar Beer & Soda on Rt. 25A in Northport. It's a popular item, so give 'em a call first(631-757-7150) before you hit the highway.

I usually don't drink bourbon OR soda - but every now and then I get a hankering for a Makers Mark and Coke. This belt is fantastic as well, but I'm afraid you've chosen the wrong weekend to cheer for the Wildcats. Go Gators!

Makers is also wonderful with just ginger ale, on the rocks with a splash of branch or in a Manhattan.

The belt is wonderful, it will be interesting to see how the original needlepoint belts like yours fairs with the mass production by several retailers (to which i am not opposed, mind you).

I'm beginning to feel the urge to post photos of needlepoint pieces by my Great-Aunt Priscilla.

The first few swigs of MM I ever had got me through my first moot court argument in law school.

And a real Kentucky Colonel who was Of Counsel at my first law firm, a guy who jumped into Europe, marched to Berlin, and presided over war crimes trials in Viet Nam, used to mix MM with boiled custard at our Christmas parties. He was an athlete at UK.

Your search for Barritts gives me a chance to repay you for the Domaine Serene Evenstad pinot recommendation you posted a while back. I get that harder-to-find half of my Dark & Stormies from directbeverages.com

... and I just got this off Cocktailians.com. The mint julep: http://www.youtube.com/watch?v=gJV-O1e10z8

Must've been a whole lot of other Yankees at the track that day, if you heard orders for "Makers Mark & Coke." Southerners -- ordering & bartending -- know it's just "Mark & Coke."

Pretty sure nobody in KY calls it "Mark." Its simply a "Makers" around these parts.

anon- I'm sure GB is easy to make. Is it any good?

Tessa- Haven't been to KY in 13 years but liked Lexington a lot.

LAS- Nice blog you got there. keep it going... which may prove to be difficult if you're drinking whiskey before lunch.

Skorp- Let me know what MM runs in the Class 6 store.

Tucker- FL won but all is not well in Hogtown.

anon 10:11 Thanks for the heads up. I'll give 'em a try. The Barritts bottles have some probs but if they have cans I'll drive out there.

Dickie- agree about the new belts. am partial to J. McLaughlin but $200 a throw is gettin spensive. looks like I'm just gonna have to hit on 55 year old women from the south (with frosted hair, pink nail polish, Bermuda shorts with tall boys and puffin on VA Slims)who seems to have made most of these belts. I'm trying to get Ken Burns to do a docu on this subject or perhaps a Charles Kuralt - like piece for the CBS Morning show.

LPC- Based on the current economy...needlepoint may well be the best value of any hand crafted item in the world.

Ben - MM with custard? I'm giving that a try.

Ox Ac Uk - I see that Direct beverages is in Wheaton. Having moved from Chicago that breaks my heart. The shipping, $12.oo or so, is not too bad. If they have it cans - - it's better in the can - - it's probably worth $40 a case.

Ben- Thanks for that.

I'm a graduate of the University of Kentucky and while there, I did make a needlepoint belt for my then boyfriend. And, I have enjoyed Maker's while at Keeneland, tailgating at Wildcat football games and more. So, thanks for the walk down memory lane.

Just found your blog via Pink Martinis and Pearls. Love, love it! I'm a Tennessee fan. We like a little Jack {Daniels} at a our tailgate before the Vols take to the field. Two years ago I purchased a Tennessee Smathers & Branson needlepoint belt for my son. Fabulous gift if I must say so myself.
Have a great day.

Like Preppy 101, I found your blog from Pink Martinis and Pearls' latest post! I love your style, and I especially love that you wrote about Keeneland and bourbon! p.s. Pat Day is always a smart bet! ;)

Took a small vacation from The Trad, but am now easing my way back into the fold.

Wow! You and this belt were meant to be! I love the Wildcat face - just outstanding. Ashley Judd, most famous KY alum I can think of, would be proud of you! (She might ask you to give her the belt, but, then again, maybe she knows how to needlepoint?)

I am overwhelmed. Thanks to all of you who ventured over from the erudite and charming, Pink Martinis and Pearls. My only fear is I'll have competition for finding old needlepoint belts from y'all.

Cathleen-Last I heard of Ashley Judd was at the closing of a Goody's in GA where she had a clothing line. I'm not sure she's the needle point type based on what I saw.

I guess I find this funny as I am from the great state of KY, attend Keeneland, UK football games and have made several belts. I guess it's all in how we have been brought up!!
Go CATS!!!

I've never heard anybody call Maker's "Mark", but that belt is easily the best damned thing I've seen on this blog.

Nick- I agree. On both points.

I think I just fell in love...

TWA- It's a beauty of a belt. One of the very best. I keep looking but haven't come close to this one. BTW, you have the most extensive list of preppy women bloggers I have ever seen. Well done.

Agreed with most.
No one in KY calls it "Mark". The more I think about it, the more that comment annoys me.

JMW: You're a mighty swell girlfriend.

I just graduated from UK a year ago and was really excited to see this belt on your blog! The belt was most likely a pattern because you can still buy a very similar pattern in needlepoint shops in Lexington today.

Girls make them for their boyfriends/guy friends. I have made several myself. We also call them "break-up belts" because if a girl started making one for her boyfriend they were usually broken up by the time it was finished.

OMG, you're not going to believe this but that is MY BELT in the photos!!! I graduated from UK in 1974 and my girlfriend (at the time) made this for me!! I can't believe it found such a good home.
I got a replacement belt from my wife which is the reason for the sale. ENJOY!!!
Bruce B.