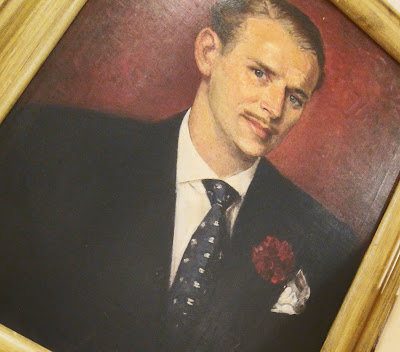 The iconographic lot of the auction. Fairbanks, looking like a young Cary Elwes, is clearly a young man here but so much of his style will remain unchanged until the end of his life at 90. The constant boutonniere, the moustache and the parting of his hair to the left. Oddly, he started out with a part on his right but changed it to the left in his late 20s. 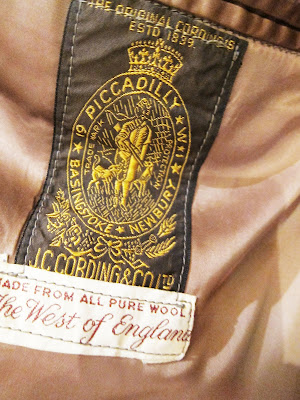 I assume you know what a Covert Coat looks like. They remain unchanged on the exterior. This one has a brown velvet collar with railroad stitching on the coat hem and sleeve bottoms. It's missing a game pocket on the inside but has the label of the classic covert coat; Cording. There is a Huntsman bespoke covert (Lot 380) which includes a tweed suit and a Huntsman sport coat. Estimate is the same as Lot 386. If at first you don't succeed at Lot 380 -- have another go at 386. 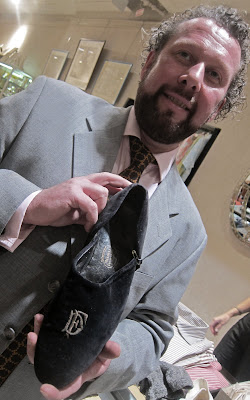 Better looking than in the catalog or on line. Consequently, they may fall under the radar of many -- until it's too late. Paul Wilson of John Lobb in NYC and Lobb of London trained, was amazed by their construction. A stitching he hasn't seen in years holds the slipper sole to the shoe fabric. They have a beautiful chiseled toe right out of George Cleverley. I'm a 9D and they fit (with ultra thin socks) like a glove. 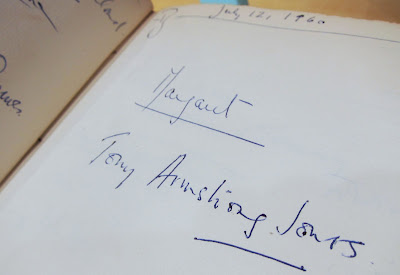 Princess Margaret and Tony Armstrong Jones were newlyweds 12 July 1960. There's something addictive about the guest books. I'm not sure what it is. In many ways they seem to be about bragging or worse, high school, but there's a wit to some of the signatures and many reflect an evening of great fun, food and lots of booze. 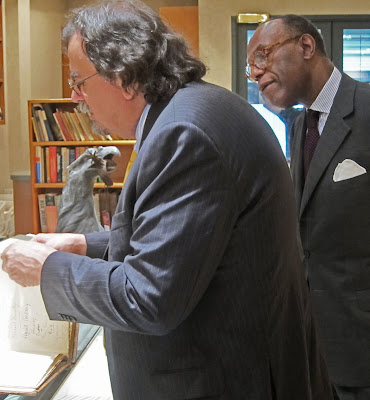 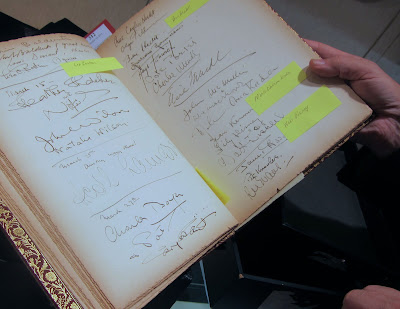 I have a feeling the guest books are going to do well. Not only does Stephen Spielberg own Westridge, but the shear volume of signatures in each book is amazing: 1,800 at Westridge while DF's London residence, The Bolton's (Lots 314 & 315), count 3,000 and 2,400. Still, it's an auction and anything can happen. 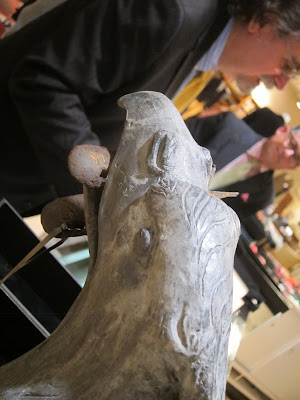 The eagle and spur were used in DF's coat of arms and can be seen on his bookplate. It's an odd (and heavy) piece of sculpture to be sure. I think, along with the portrait of DF, that it's a symbol of a life well lived. Obviously a lucky one but always interesting with a few Bohemian twists and turns. 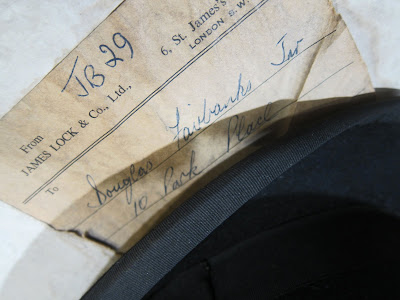 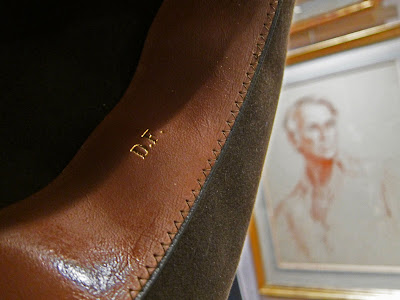 Most of DF's hats are marked 7 1/8. However, I'm a 7 1/4 and they all fit. This is a wonderful lot if you're a hat person. Although, if you're a klutz and forgetful, you should consider the iron eagle bust. I don't think you're gonna leave it anywhere like you might a hat. Plus, when you're wearing a hat out, where the heck can you put it once you're inside? Hat racks are gone and so are most coat check rooms.

Most people do not know how to gauge a hat for their head. I don't know how many tweed caps I've seen that make the wearer's head look like it was shrunken. Or, how many fedoras out there with a crown height that's better suited for Jeweler's Row. I've had to wear a number of uniform hats and, for me, a hat that came with a job was one to avoid. But DF's collection (Lots 356 - 359) are mostly Lock and mostly top shelf. 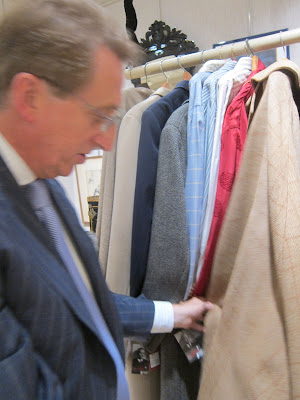 Len Logsdail favored the capes - of which there are two. This one and Lot 412, a black evening cape with black velvet collar and frog closures (Est. $400-600). Like Paul, Len was impressed by the construction and the aesthetic of what has become an anachronism. As a Savile Row trained tailor, Len noted the lapel button holes on suits and jackets were all enlarged due to years of boutonniere use. A nice touch that would make for interesting conversation over cocktails. Suit sizes run 40R to 42R. Trouser waists run 34" to 35" while sleeve length is an amazing 32". Give or take. Len figures DF as long torsoed with short arms and legs. 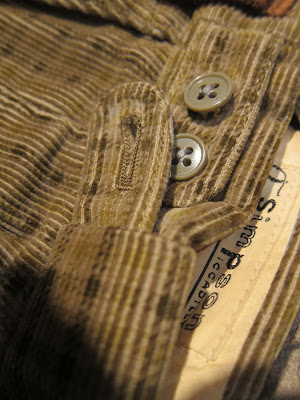 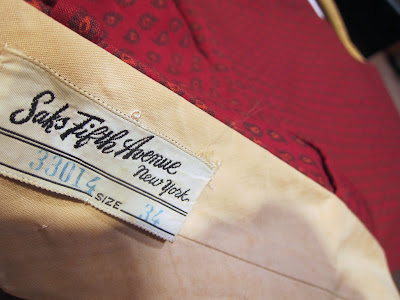 Following on Len's observation of a long torso, Tom Davis and I measured these trousers. On both pair, the inseam was 30.5". The out seam was 41.5". I remember Paisley cotton trousers being the height of Prep back in the 80s. As light as Madras but far more understated. They're overdue for a comeback -- If understated ever comes back. The plaid corduroy trousers are featured in a photograph of a Gucci shod Mr Fairbanks on pg 113 of the auction catalog. 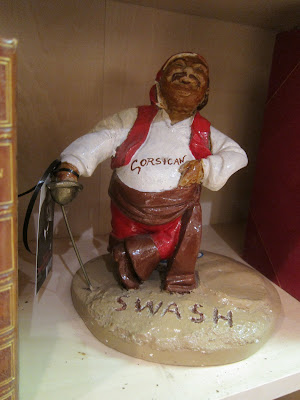 I'm not sure why I was so attracted to these. Certainly the price is right. They reek of character. The provenance is crystal clear. And I think they speak to a time of a long gone Hollywood. 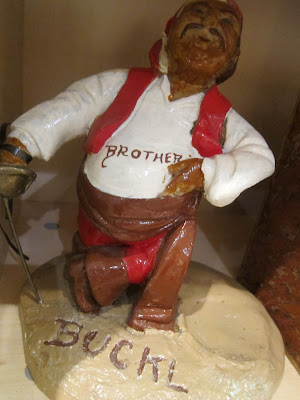 I'd never use them as bookends. They deserve to stand next to each other. 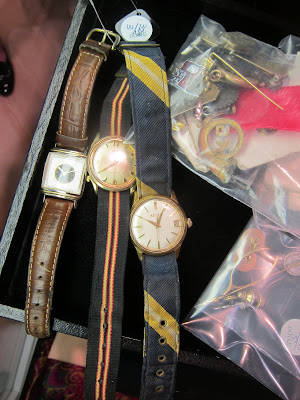 As a bidder, I would hope these three watches might fly under the radar. The bands probably came from Chipp because Mr Davis advised Brooks Brothers didn't sell this type of band then. The gold and navy rep speaks to the Naval career of Captain Fairbanks (ret.). There's a simplicity in the faces I like but few seem to 'get' without the "J. Crew" frame. I don't even care if they work.

In summary, here are the sizes mentioned above and a couple that were not.

I'll put up a post tonight or tomorrow morning of Alice Olive photos ( an example seen here) and some final words about auctions and lives lived.
Posted by tintin at 10:10

Looks like an amazing haul. Hopefully as enduring as those famous last words of his.

Thanks, TinTin, for doing this; I do appreciate it.
I was measuring my suits this very morning to compare.
Drats, it looks like I won't be making any bids on clothing!

I'll take one of the guestbooks and that watch with the leather band. You can get the slippers.
~M.

What amazing items! Somehow, I think you will end up with the cape...

The olive plaid cords look like the ones from this famous picture.

TB- They are and thx for the link. Flusser used the same image in the shoe chapter of Dressing The Man (pg 205). If I recall. I was always curious when it was taken and by who but Flusser lists no photo credit.