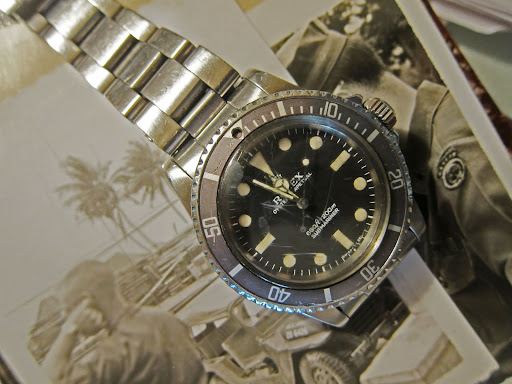 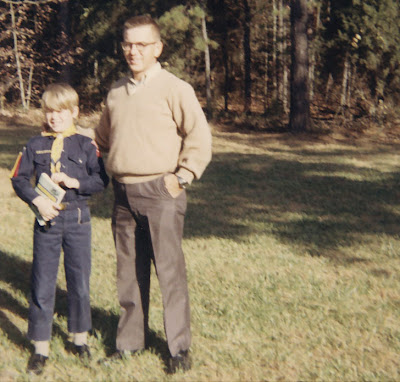 I grew up with the lore of my father's Explorer upon his return from war. It was an icon to me. His thick wrist covered in the black face and stainless steel with those beautiful numerals. 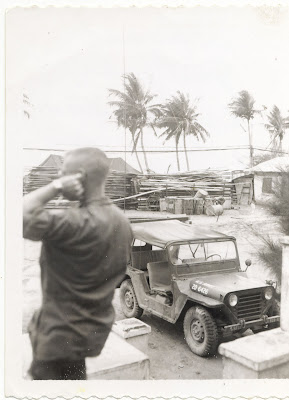 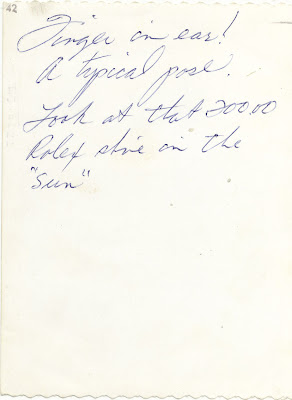 I learned to make fires in the Army and it didn't matter how wet the wood was. It always ignited. Thanks to a 5 gallon can of mogas. Despite her vulgar and wasteful ways the Army was not shy about collecting totems within units.

I was eight or nine when I first heard 'Rolex' from my father. It was the watch for Special Forces. Anybody in the military could buy one but few did. 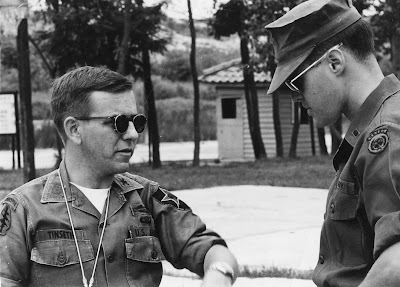 He's showing the Explorer to an anchor cranker or marine. No doubt the young 'El Tee' bought a Rolex before rotating home thanks to that mystical military allure. No, "Joe Shit the Rag Man" here. We're talking clued in. OD Green hipsters. Guys who sniffed out the best: restaurants, booze, cigars, music, reel to reels and wheels. 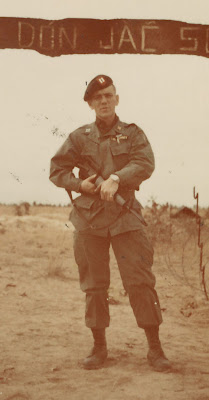 It was the totem I grew up with. The mysterious watch elicted 'oohhs and ahhs' from those in the know and not so much as a side ways glance from those not. That was the power. 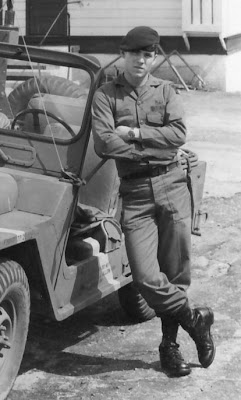 I pulled the trigger in 1976. Couldn't swing the Explorer but happily settled for the 5513. I was in the Sub Club few understood. Times have changed and the Sub is everywhere. When Dad and I talk about Rolex it's almost as if it's an old language we've grown tired of (Dad chucked his Explorer into a New Mexico desert and I'm close to chucking mine onto 7th Ave.). Inaccurate. Expensive to repair. Anxiety of loss.

But it was his advice I nearly always bought, "Drink the local beer. Be the last to a party and the first to leave. Check out her mother before you marry her. Never take anybody's last anything. Keep the rear sights in focus and you'll hit it every time." These things never seem to run slow or get lost.

Sound advice and a great story.

So does anyone wanna hear a story about my Timex? Anyone... anyone?

I love this post. You and your Rolex history: legend. Does it keep accurate time? Who cares! Wear that thing everywhere! Everyone's damn cell phones keep better time than any watch, anyway.

Like a famous novelist you admire at a party in his shopworn tweeds - a bit of eccentricity in the kit. Most will still not get it. The insiders will. Still.

You can read about selvedge. You can look at photos with some guy wearing a different business suit every week with a cigar in his mouth or you can read THE TRAD.
Great post!

My dad bought an Omega Seamaster in 1968. He's a cattle farmer, wanted a watch that he could throw anything at and it wouldn’t break. The Seamaster and a Submariner were his two choices.

He stopped wearing it in the late 90s, because he kept breaking the strap, and having the thing serviced frequently enough for accurate time was exspensive. Replaced it with a Seiko quartz dive watch, good to 1000 metres. The Seiko is a tough watch, keeps perfect time; he occasionally breaks the strap, but far less frequently.

A couple of years ago I asked if I could have his old watch. Didn’t even know what it was; kinda assumed it was an old Seiko. I just wanted to have my dad’s old watch. I had it serviced, a new strap fitted.

Inheritance without the painful part. Love that thing.

And what about star sapphire rings? It is true that was often paired with a Rolex watch in the SF or is that a myth?

Oyster Guy- Not a myth! My father and I were never much for rings but they were popular with mostly senior NCOs from my memory. This is Vietnam era and just after but the SF trifecta was the Randall knife, Rolex watch and star sapphire ring.

Your prose is (usually) worth ten of these hunks of metal. It's a timepiece for chrissakes.

Sound advice, per usual, from Trad Dad. But the drink-the-local-beer thing? Not in NYC, brother.

My husband has that watch - looks to be in the same condition as yours.

His father had one too, but sold it. It was too tricky with 2 sons and 8 grandsons.

Great post. The guy is Navy, but not a Seabee. Wearing a f'd up UN patch. Poor guy. I bought my Oysterdate on my first deployment. Single 24 year olds on deployment have more discretionary income than anyone in the world. Love your dad's advice. Did you know they brew beer in Pakistan? It ain't bad. BTW, Subs are still real big with all the SFers I come across.

For SF it used to be Rolexes---now it's Oakleys--LOL. The watch of choice for Rangers in the late 70s was the Seiko auto diver with the black rubber strap. Maybe tougher and more accurate than my Sub, but who cares? If I'm two minutes late to anything but a raid or ambush these days I'm usually early. That said, my Sub was my first good watch, it is in my gun safe, and it is earmarked for my son.

Advice from Dad about checking out the Mom of potential is dead-on.
My Rolex GMT master II is also dead-on. I set it by the U.S. Atomic Clock once in a while and barely misses a second.

I remember you were the only guy in college that had a watch that was not made out of plastic.

Great post. 2 things close to my heart: my dad and the Rolex he (and mom) gave me.

... and my pop STILL has that shitty reel to reel that he insists will become an rare and sought after artifact. Roger that on the former but not the latter.

Never fail to honor your parents.

... by the way, you and your pop look effing squared away in that scouting pic.

Timex: I still wear a vintage Timex with web strap. Excellent watch but no style setter. (Who needs style?)

Star sapphire ring (or any other ring):
As a young infantry recruit I saw a man jump off a truck and his ring got caught and stripped all the meat off his finger. I've never worn a ring since then.

Panmunjom, Korea: On our side, the troops are from all U.S. and some UN forces. It's a "purple suit" unit (mix all the uniform colors and you get purple).
They're subject to attack by the North Koreans at any moment and are all heroes in my book. (Incidentally, one of my close friends is a retired Marine Gunny -- men don't come any better than that.)

Reel-to-reel tape machines:
You'd be surprised how sought after the good ones (like Akai) are.

Drink what the locals are drinking is prudent -- especially if you're in a Texas road house bar. (One of those with chicken wire in front of the band stand.)

DB- Do you remember how many pictures we took of it? With your camera and your film?

AB- Thanks. I thought it was one of my worse. Stew knows.

P- Thanks. See above.

AW-"Inheritance without the painful part. Love that thing." Well said.

Stew (GSV JR)- "Your prose is (usually)worth more..." Yeah, this came up short. Probably because I was sober when I wrote it. But the pics are good and I figured that's all anybody really cares about.

Anon- This guy has a neck so I doubt he's a Marine. But thanks for the correction.

Patsy- That's how I wound up a best man. A buddy had four brothers.

Scott- Great to hear the Subs are still popular with SF. I thought the hipsters in Brooklyn had absconded with 'em. It's insane how many of 'em there are.

Brooklyn looks like the Pentagon in 1985. Ray Ban Aviators and Subs as far as the eye can see. And I'm guessing very few of these gents ever served ...except maybe a Caeser salad.

Jeremiah- That's wonderful. Not sure I ever understood the Oakley thing. Ugliest sunglasses. Maybe it's a generational thing. I do remember the Seiko being big with Rangers from Hunter as well as some guys in the 82nd.

I was on a platoon run late one afternoon with a SSgt Palkovitch. He loved to run but he had to get us back to the mess hall before it closed. We're on this run that was pushing 10 miles when I say we need to be getting back before the mess hall closes.

Palkovitch says, "Private Tinseth, my Seiko says we got plenty of time to get back to the mess hall." And I say, Sgt. Palkovitch, my Rolex says..." Well, you know the rest.

Main Line- I swear, these newer Rolex watches have vastly improved or you new guys are all blowing smoke outta your 4th point of contact.

In the 80's (and in your fair town of brotherly love), I remember a dinner table of 12 and 5 of us were Rolex owners. We all had different times - - by quite a margin. But there was this woman wearing a man's Explorer and I was crazy about her. Something about a woman wearing a man's Rolex, loosely, that's sexy as hell.

Jeff P. Do you take yours off when you have sex?

Ben- I swear your Dad is right about reel to reels and you're right about parents. And I was the biggest loser in scouts.

I couldn't carve a balsa wood kerchief slide if my life depended on it. Did the scouts offer a merit badge for writing or mixing cocktails or rolling cigarettes? No. I was set up for failure.

Thanks, Dad. Stew (GSV Jr - sounds like a landing craft) once said this blog reminded him of an officer's tent. Well, I worked for a living but today would have to say it's officers and enlisted. Thank you all for your comments and for contributing.

"Jeff P. Do you take yours off when you have sex?"

It was present and accounted for last night. Airborne!

It's scary Tintin, I thought I was the only one. Back in my school days I had a really stupid crush on a stunning and exotic woman who wore a huge s/s Rolex Daytona. It was an older model; I've never seen another like it, much smoother looking than those made today. Ever since, I've made a point of complimenting any woman wearing a "man sized" watch.

She liked me well enough I suppose but it wasn't going anywhere. I was 20, she was 26. I was a smooth talking back woods boy from Canada, she was born in Rome, lived in Switzerland and carried a Dutch passport. You would have adored her massive collection of cameras and lenses. I think she was studying photography and art history. Chantal, if you are out there...

I can't be the only one thinking of the watch scene from Pulp Fiction:

Memories, good ones, they take a licking and keep on ticking.

Incredible! I wonder if by some random chance our fathers were in the same Army Special Forces group at the end of the 1960s! My father got his (which he still wears today) with his group after a visit to Hong Kong. Apparently in his group everyone had to get one...or perhaps it was just a Special Forces thing...

Just got a 1979 5513 Mark III Maxi dial. Bracelet's a lil loose but boy do the white lumes pop out at ya.
Insert is faded to a dark navy.

Love the feel of it sliding up and down the wrist.

Rolex Explorer was designed in 1953 for the Everest expedition, have rarely taken mine off in last 25 years. I remember a Ranger back from Nam showing me my first at Ft Polk 11B training in 71 and I always wanted one, Subs are nice but everyone has them.