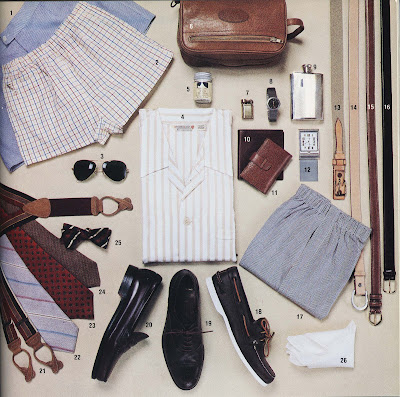 I'd like to make an observation. There's not much up there, 27 years ago, that would look out of place today. In fact, most of it would put you in fairly elegant, if not fashionable, circles. At least that's what I think but be warned, I'm getting on in years as my lack of lips will attest.

'Seaside Vacation' was written by R. Rushton Chatsworth III (a.k.a. John Fairchild), the layout was by M's fashion editor, Robert Bryan, photographed by Thomas Iannaccone and there's not a Red Wing in sight. But I know men who would commit small crimes for that Ghurka carry on and some major ones for the Hermes cashmere tennis cardigan.

Early issues of 'M' nailed classic clothing, and like any art, the choices here have stood the test of time. My God, if you were lucky enough to inherit any of this from a dad or an uncle, you would have a beautiful and honest patina as well.

If you're rolling up your jeans so everybody can see your cordovan work boots. If you're looking for the nerdiest black frame glasses you can find. If you're shaving every 12 days and refuse to part your hair... Understand any photo of you 27 years from now is gonna look dated. And that may not be a bad thing. I know plenty of men who will proudly show you old pictures of their mullets. Forewarned is forearmed.
Posted by tintin at 11:41

A trip to the seaside, with one suit, two sport coats, two ties, a bow tie ...

Have thigns changed that much in 27 years?

Last time I was at the seaside I was looking fancy in linen trousers, polo shirt and desert boots.

27 years ago you would have seen a lot of tube socks and short shorts.
The layout screams '80s but would have seemed retro then. That was one reason I liked the look. I never went through a mullet phase. I went from shoulder length hair to white walls in the space of a week. ( I had to go to a 80year old barber in order to get the look I wanted. The week before I got a haircut suitable for blow drying and shellacing with Mennen's The pump for men.)Peers asked me if i was going Punk. strangers thought I was in the service. One of my Dad's friends said he liked my Ivy league haircut.


"White walls are not Ivy"

Unclelooney - I too can hang my hat on the fact that I did NOT go through a mullet phase....sadly....I once had a rat tail....my dad had one, I thought it was cool...but I also thought he was the coolest dad in the world because he could flip an entire cigarette into his mouth, smoke it, and flip it back out. That and he could flick his cheek and make a water sound. Apparently my standards for "worlds greatest dad" were not that high.

2 button - It bothers me I even remember this. 2nd clip in:http://www.youtube.com/watch?v=yEXkCYcwtSo

tintin- HAHAHA...That is GREAT! Had I known that my dad shared a talent with John Cusack, my head may have exploded. I may need to bump him to the top of my "amazing people who do amazing things" list. Way to reach deep down into the memory bank...I love it...lol.

Andrew McCarthy-Trad but definately not Ivy.

uncle looney- I'm trying to remember who Wallace Shawn reminds me of? Now I remember:

Class will be the next fall Rugby concept. Mark my words.

My subscription to M magazine STILL hasn't shown up in my mail box.

-Who do I complain to?

Ever since I read this, all I've been able to think about are these pants my grandfather gave me. A quater of each leg is a different color. Tan, Hunter Green, Maroon, and Brown on one leg...I can't remember the color on the others. Now I need to go find these things.

Spot on. Classics remain classic. Are the men showing photos of their mullets nostalgically lamenting their present lack of hair?

Wow! I thought that I packed a lot to go to the beach...

I kick myself weekly for not using my employee discount at Britches to buy Ghurka. Still couldn't afford it even at that.