Off The Reservation With Brohammas 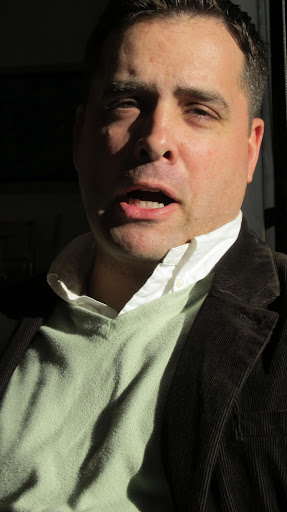 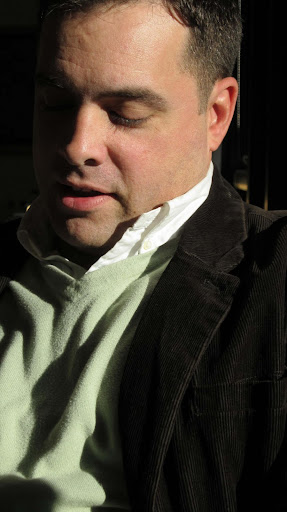 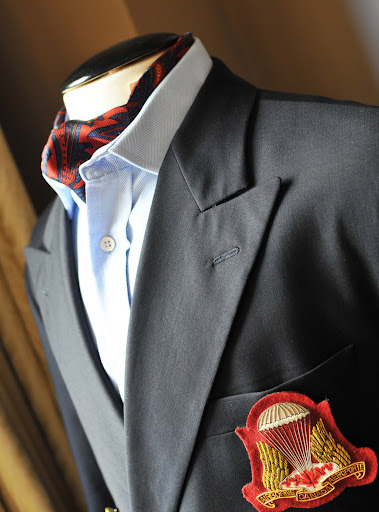 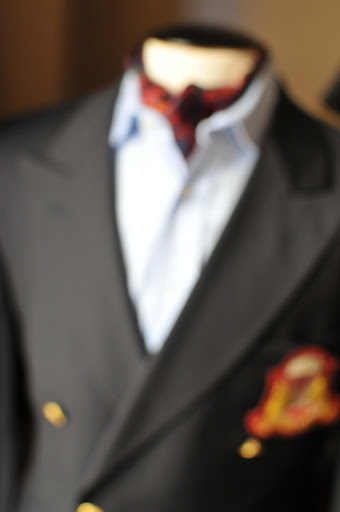 Which looks better out of focus

Last week I met Brohammas for breakfast in Philadelphia. Nice guy. Never had a drop of alcohol. Good thing we met for breakfast. Anyway, he asked if he could interview me and after two cups of coffee I was off like a rocket. You can read the interview and see his art here.

I thought a picture might help with the story (told here) of the ascot and blazer patch. I've tried to recreate what I wore that night here. I want to be very clear about the rule I broke that night. Whenever you wear an ascot it's best to tone everything else down. A lot.

That night I did just the opposite with a double breasted blazer and blazer patch. A pair of velvet slippers would have pushed this affectation way off the reservation. I told my young interviewer, "If you can't forget you're wearing it - you probably shouldn't."
Posted by tintin at 10:43

Wise words Dallas. I don't quite trust me either.
Tintin, great morning, and you are right; shoulda brought a tape recorder.

not supposed to trust men named after cities either.

Dallas- I would've said the same thing 10 years ago but middle age is full of friends I trust but who couldn't trust themselves drinking. They made a choice and I respect it. Broh-Man's choice comes from a very different place but it nets out the same.

I just don't trust anyone who lives in Philadelphia.

Brohammas- I am impossible to follow in any logical way. You did well with the tools you had. The foxtrot tells me that cafeteria is managed by a famous Philadelphia chef. Gotta love Philly. Shame about those Bears.

Damn sorry I missed this one...but duty called...gotta pay for all those shotgun shells and Bourbon.
Next time for certain....Vesper Club for a lunchtime step back in time...

Ouch! (Don't trust people from Philadelphia!?!) I would have had you over to the UL for an adult beverage of your choice, after your caffeinated morning interview. Your Blazer and Ascot would have fit in nicely. Next time in Philly, look me up!

Good interview. I really like that sketch of you! Can you get that for your own blog..?

"If you can't forget you're wearing it - you probably shouldn't."

Words to live by. Well, one needs a bunch more words, but those are some of 'em.

I love Brohammas' illustration and his version. I also like yours. Your line of "If you can't forget..." is similar to the advice (which I think has been attributed to many) of turning around in front of the mirror before you leave. Whatever catches your eye, remove. That is probably how I've wound up as a minimalist. (Perhaps the key is to only twirl once.)

PS - For many reasons, I love the out of focus shot!

Should have worn the Souleiado shirt Tintin...it would have blinded him

What's up with the Canadian airborne badge? Did the owner of the blazer serve in the Canadian Airborne?.
I know many of the vets of the 1st Canadian Parachute Battalion of WW2 personally.

thecontcat- it never ceases to amaze me.

Main Line- Vesper sounds great. Will give you a heads up.

Rittenhouse- I belonged to the ULC in Phila. Best lobster club sandwich I've ever had. I'll have to take you up that drink. Cheers.

DB- Probably not without paying him a huge fee.

Joe- I'm afraid so. He has a hard time with madras.

j mosby- I went thru Canadian jump school in Edmonton when I was in the US Army. It was sort of an exchange program. I was lucky to go. I didn't serve in WWII although there are some here who would argue I did.

Hmmm, I don't have a problem with madras, unless you ask me to wear it. I don't even know what Souleiado is (and I'm too lazy to google it).
As to my art; I'm incredibly affordable, just ask the guys over at Bonobos.

Mr. Mainline, you were missed. R.C.C. I'll wear an ascot if I get some custom clothes to go with it.

Alice, what if you spin around and all that catches your eye is elbows and paunch?

"I don't even know what Souleiado is (and I'm too lazy to google it)."

Put on your shades, or half close your eyes, and scroll down to the next item on the Trad blog entitled "The Friday Belt." Make sure you follow my instructions or damage to the retina could result.

And the man is a gentleman adventurer -- at least in spirit and in another age. I know you enjoyed your breakfast.