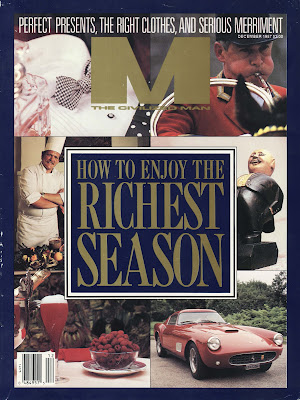 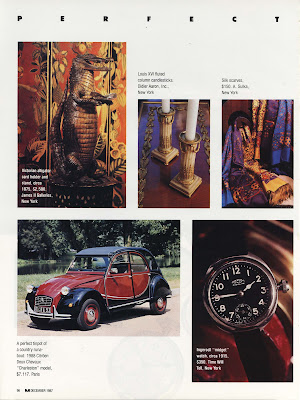 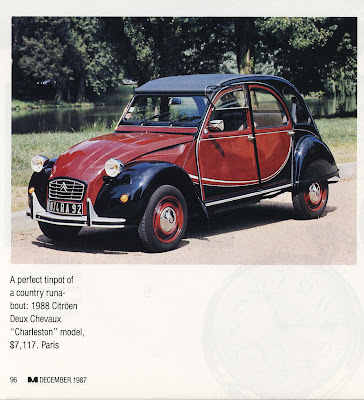 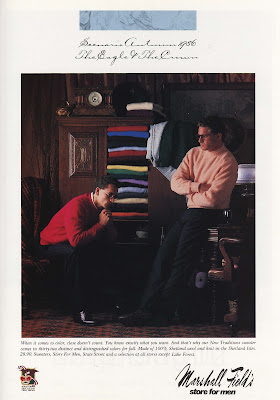 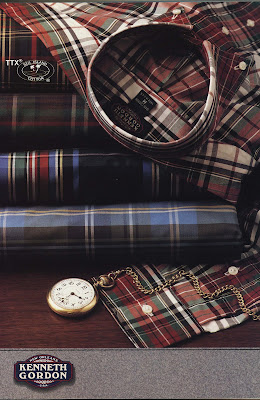 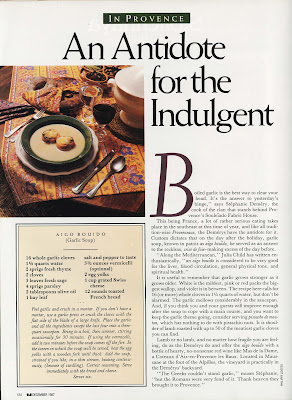 This is the kind of magazine you find in your dentist's office.

All my life I wanted a chocolate brown 2CV. Forgot to ask Santa this year, oh well.

Hope that you had a magical time and that your liver is in better shape than mine...
E

heh, i just made garlic soup this afternoon after three days of merry making...

it is what julie child claims - a tonic - i make it a habit to have at least twice a week.

LAS- Maybe your dentist - not mine. I have Larry David's dentist.

Belle- 602 cc's of Gallic thrust. It takes a certain kinda man to pull off a 2CV. Especially in your neck of the woods.

ELS- My liver has seen better days and I'm on double secret probation. Other than that - all went well. How close to West Yorkshire are you? And please...don't bother him with offers:

I saw a Tan 2CV near the Tintin store in South Ken with Tintin and Miloux painted on the back. It's what I've always wanted to do.

Anon- It's good stuff but I've only had it a couple times. As a regular - Do you have to wear lots of cologne?

After one of your last postings, I Googled "M The Civilized Man" and realized that most of the images that came up were from your blog over the past 1 1/2 year. So thanks for your yeoman efforts, then and now.

Why didn't the Lake Forest Marshall Field's have a selection of sweaters? Hmm. I still have a chamois Marshall Field's "New Traditions" shirt that my brother gave me for Christmas about 20 years ago. I had no idea that they were offering the rainbow in Shetland that year, though. That Citröen is a stone cold classic. Great post, tintin.

I'm not sure garlic would even begin to make a dent; it'll be the full transplant for me I fear.

Oh, it's just beautiful and grey will match my complexion.

Anon- Pure self interest. If I can garner enough interest in "M" my hope is to jack the price up on Ebay and sell my collection (after I've scanned it) and buy the coolest train car in the world- A 2CV with custom Soleado upholstery.

Tweed- The Lake Forest Fields was a beautiful but small store in a shopping center that was built in the early 30's and one of the first I'm told. It has always had a small men's dept usually consisting of two pair of boxers, a Member's Only jacket and a bottle of Aramis. Since the Macys debacle who knows what's there. Probably a Staples.

ELS- I don't think he wants to sell it.

An LF update...Macys is gone. Didn't last long. Has been replaced by J Crew (also completely lacking a mens dept.)and some sort of womens makeup store. Even the "wine and cheese" store has been made over to look like a plastic filled deli where the wine and cheese take a back seat to a crappy over priced sandwich. Thankfully the Left Bank remains and the least sloppy joe ever can be had for a song.
TRB

Is that old paharmacy still next door to Southgate? They had some very hard to find stuff not to mention bizarre European toiletries for insane prices. I may have to send you out to take some pics for me.

TRB- And the bakery? Down from Don's? Please tell me they're still there. The best Christmas Stollen I've ever had. It must have weighed 5 pounds.

If you mean Gerhard's, then the bakery down from Don's is still there and still terrific. Sadly, Don's is gone. Didn't pay their bills; the bank came in a closed 'em down. Some Whole Foods like knock-off is supposed to open there in the spring. One of the Don's butchers opened a shop in LB, The Daily Grind behind the Village Market. The Village Market (http://www.thevillagemarket.net/index.asp), next to the post office, had a complete makeover taking it back to its original look and adding a small but nice (and ever changing) wine section. You would be hard pressed to not stop in after getting off of the train from the City...you'd like it I think.
Finally, the pharmacy next to Southgate is gone...made way for a custom cabinet store.

TRB- The news from Lake Bluff and Lake Forest. It warms that bit of midwest still alive in my heart. Thank you.

Do you have to wear lots of cologne?
actually your body gets used to processing the garlic.

It's just a coincidence that i haven't had a date in four years.

Anon- You just joined my comment hall of fame.

A couple of comments on the Deux Chevaux.....a girlfriend of mine had one in the early sixties.....all battleship grey.......getting up steep hills and overtaking large trucks were challenges......but a great little motor that sounded a bit like a sowing machine......the all canvass pullback roof was fantastic.....odd that Citroen has never produce a retro version as BMW has done with the mini or Fiat with the 500.

Joe- I was thinking the same thing about the 2CV. I think it is still being produced in France and it was being exported to some very poor African countries in a alternative to steel. Very cheap and very easy to repair.

tintin said...
Joe- I was thinking the same thing about the 2CV.

.....Looking at the pic you hardly need to change the design....just upgrade the suspension, electrics and hydraulics and add a more powerful motor (passing those trucks was a nerve wracking experience believe me).....I don't think they are still producing it but it you may be right as I'm not an expert.....a great example of low tech like the beatle and the mini cooper (I had one of each at one time and another)