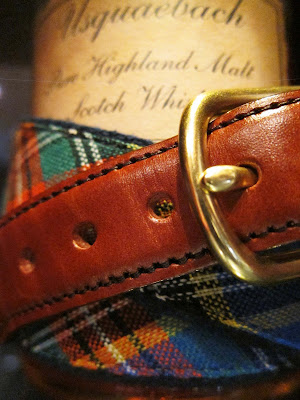 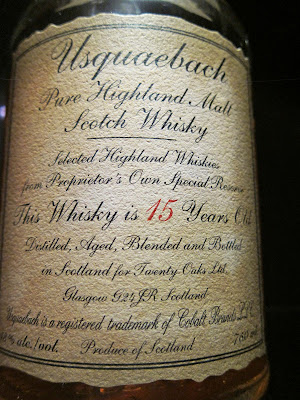 Usquaebach (oos-ke-bah) Pure Highland Malt Scotch Whisky
We've established I like good value. I like to say I'm cheap and while there's some truth to that when it comes to buying toilet paper - - I'll pay a premium for something unique. What I live for is to find something unique and cheap. Here are two belts that fit that bill.

I called in an order to Leather Man Belts for some tartan ribbon belts. I'd been admiring them over a year and they're unique. I knew I could customise the webbing but didn't know I could request an odd numbered length instead of even. So I did. I asked the fella taking the order if he could do something unique for me that nobody else can get. He wants to know why and I tell him about the Friday Belt.

He says, "I'm working on something new. Let me send you a sample and I'll see if we can't find something - - You know- - Understated." I like this guy a lot and he tells me his name is Cecil and thanks me for the order. The day after the tartans arrive I get this belt up there with a nice letter from Cecil who turns out to be the owner. This is a wool tartan, understated and in an odd length. You just don't see belts like this everyday. And you sure as hell don't get a letter from the owner of a company everyday.
Usquaebach is an off the radar pure malt (as opposed to single) blend that was sold to me as a single malt but according to the bottle is a blend and I can't find out anything about it. It was cheap for a single malt (but not for a blend) and reminds me of the crazily expensive Midleton Irish Whiskey which is a blend. Very honey like mouth feel with the roundness that comes from a blend but a tiny bit of fire in the after taste. For some odd reason room temp Volvic water is my must-have bloomer for neat whisky and it's required here.
Usquaebach was sold to me by a straight arrow salesman. A no nonsense gentleman who suggested I give it a try when I wanted something almost double the price. Maybe the current economy has everyone looking for good value. Whether you're selling or buying...we can all sympathize.
Posted by tintin at 08:07

Usquaebach sounds like the old Gaelic word for whiskey, meaning Water of Life.

I don't actually know any Gaelic, other than pogue mahone, but did visit the Whiskey Museum in Dublin, where visitors learn the etymological history of whiskey.

First bought a bottle of Usquaebach
at a Montana State Liquor store on the way to fish the Madison River, 1979. Two of the four friends with me that day have, unfortunately, stepped off. Great whiskey, great memories. Thanks for mentioning it.

I have been looking at these belts as well. Made a post about it on my blog.

To clarify, a single malt has the scotch from a single distillery.

A blend has malts from multiple ones. Left unsaid generally, though, is that a blend has other alcohol as well - it's not pure scotch.

So, it's neither a blended scotch or a single malt. Hope that's not too unclear!.

My personal favorite and perhaps the best known of this variety is Johnny Walker's Green Label.

The only time I heard of Usquaebach until now was during a story a friend was telling me about a sheep hunt in Alaska. He packed a bottle and he and his guide hunted for several days before they killed a nice one. They were pretty high up and to celebrate he cracked the bottle and they proceeded to drink it around the fire that night. All of it. The altitude took care of the rest. I've never seen a bottle but that has to do with Washington state's communist liquor regs, I'm sure.

Whatever you do do not try Redbreast. It will make you a poor man.

Nice tip on the Leather Man belts...I'm going to order a couple myself and check them out.

Aaah, that belt is a work of art! Thank you for this post!!

Mr. Sean, the words you're looking for are uisge beatha.

I've never even heard of this scotch, and a pure malt is rare as it is! The label looks serious as well. JW Green is the only one I know of and I like that it isn't chill-filtered but for $50 I'd get a single malt.

I would very much like to see the closet in which these belts reside. I remember browsing over very old issues of Vanity Fair in which they carried a series of famous celebrities closets. There were only two issues in the used book store and I was too young to appreciate what I had in my hand. I do remember one belonged to Gary Cooper. Mirrored sliding doors and all his suits beautifully arranged. Sir, please. Your faithful blog follower in California - Room 5.

Thanks to the People's Business for setting that straight. I owe you a pocket square. I was confused because it had Single Malt all over it but a reading of the fine print revealed otherwise.

I wish Cecil would do a sample of each belt's design with each option of surcingle base. If I had the dough I'd do it. I could see some of the combinations, (the Wallace and turquoise) being either brilliant or train wrecks. Purple base with the Houndstooth? Menzie Black and White on Pink?

I'd be happy to have anyone share their belt combo with me and I'll post it as a Friday Belt guest.

Anon- My closet? I'll think about it. My closet in NYC has some unusual provenance with a living fashion icon so I must be careful.

Tintin, thanks to you I have the Ross Hunting Modern on the way. I'll share pix later in the week when it arrives.

As for Redbreast, gods gift to Irishmen, I can never say enough. I've many great stories centered around this elixer.

Toad- That's a nice belt. Should pair well with the Redbreast. I'll try it this week. I've been hearing amazing things about it.

Hmm, wonder if they have Mrs. E.'s clan represented? A fine gift for an in-law or two.. I'm off to see. Thanks.