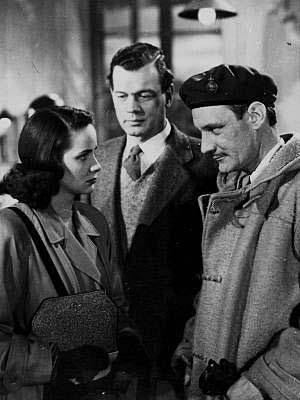 Criterion's DVD of The Third Man has some amazing extras and a load time of two days. Trevor has a nice roll to his sleeves. 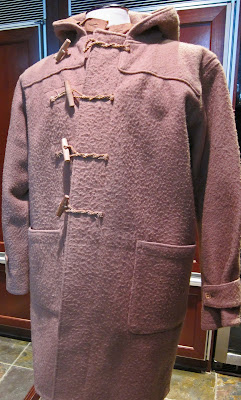 I know friends of mine will call me Paddington Bear but I just don't care. 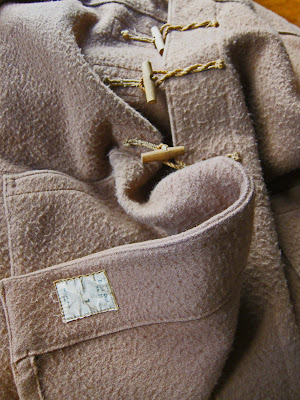 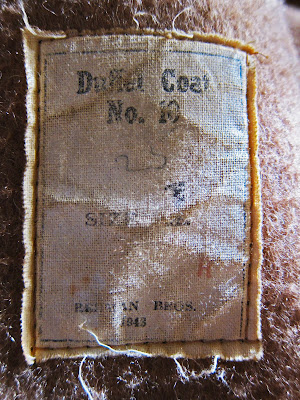 51 pounds without shipping. That's not how much it weighs although it feels like it. Not long ago it was rare to see a duffle with rope and wood toggles. They're everywhere now. I admit to not liking that. I also admit to being cheap and so I went looking for something different.
I had heard that WWII surplus duffel coats could be had several years ago. There was a mysterious dealer somewhere in the 'burbs of Chicago who had a supply but I never found them. I found a Navy Duffel with rope and wood toggles on sale for $99. There's a subtle window pane check but it was close enough for government work.
But this is the real deal found on U.K. eBay. At seven pounds, the shipping from the U.K. was more than the coat but for me it's a bargain. Made by the Redman Bros in 1943, it's a size 1 which I understand is the smallest size and it's huge. No pocket flaps. No lining. Nothing sophisticated here. Just a solid plank of wool that is overkill for the coldest NYC winter day. It's the SUV of duffle coats and it stands in contrast to the China made ersatz being fobbed off today.
Do you have more brains than money? Go here for a nice selection of authentic used duffles available in the states. Nothing from WW II but nice coats under $65.
I found this amazing interview with a cutter from Redman Brothers. I love these oral histories. They're dense but I read insurance policies for a living so this is cake. Looks like Redman went belly up in 1985 despite some glory years in the 50's and 60's. While I have no idea if my duffle saw service on the North Atlantic - - And I doubt it did due to the shape it's in - - I did enjoy reading about the history of the town where it was made and the building it was made in. Even the place for pies in town.
Suther’s shop and Stansfield’s shop – they were both general stores but they made dinners, pies. Stansfield’s only made them on a Friday and they only made pie & peas, but Suther’s made a range; he’d do steak pudding and peas and mashed potatoes, he’d do pie and peas, he didn’t do chips – the chip shops did chips, but on a Sunday he’d do a roast dinner and at Christmas he’d do a Christmas dinner.
You can imagine these factories – he was making a lot of dinners for [incomp] and they used to give you commission for going to their shop you see, and t’fish shop used to give you…I can’t remember, I think it were so much in t’shilling or so much in t’pound and I could make more money because I were getting this on t’side for my pocket money, so I were all right. I used to be able to cheat a bit – if t’pies were fourpence ha’penny you could charge fivepence but unfortunately one week I got found out because I were off for a day when t’pies went up to fivepence from fourpence ha’penny and t’guy told ‘em, and they said ‘we’ve been paying fivepence for t’last six months’ so I were in trouble!
Posted by tintin at 12:47

Paddington Bear's duffel is blue. Don a plaid scarf with beret and you'll look great. Yours looks like a dead ringer for the one Trevor is wearing. Would be de rigueur for topside viewings on wintry trans-Atlantic crossings.

Let's not forget how fascinating Orson looked, too, in his overcoat: collar up, sweaty, disheveled and lurking among the shadows...

Wow. That's a great coat. I wonder if they come in olive drab, too?

I used to have a RL black watch toggle coat. But then I discovered fried chicken livers and couldn't toggle the toggles.

You may enjoy knocking around here

Love the story, love the writing. Seriously, give the coat to someone under 19 or only wear it in Darkest Peru.

Great Aunt Lucy would be spinning...

Man, I owe you big time.

I went to the site, spotted this, (which is actually much closer to what Trevor is wearing)in my size!

Called the shop. Gary, the owner, was really helpful, and I'll have it by week's end.

Thanks for (inadvertantly)helping to make that happen.

Michael ("but no matter what you say, I'm still not getting monogrammed slippers") B.

DB- They only came in one style post war. Mine.

Stew- I remember thay Polo BW. It was amazing. Mid to late '90s I think. You must downed a lot of fried chicken livers.

ELS- I'd give it to my nephew but he'd look like a boat under a tarp. You should be at the bar right about now.

Michael B- Glad that worked out. That's a nice selection. Based on my current brokerage fee that owner owes me $6.

My dad's was olive. Funny how those memories surface.

When did "duffer" become "duffle"?

LPC - I have three and one is olive. My favorite.

Duffer was used then. Don't know how far it goes back. Anyone?

About 2 years ago, I won an auction on UK ebay for a WWII nice condition Size 2 duffel coat. It was about $80, and was going to be another $80 plus for shipping. I paid the money and the seller then defaulted and sent my money back. Am I still bitter? You bet.

As to Paddington the Bear, suggest that your doubting friends to Google David Stirling. I bet even tintin's Trad Dad could respect a coat adopted by Stirling.

Any post that mentions "The Third Man" instantly captures my attention...

Man, love the movie, love the coat! Trevor Howard made that duffle coat/ beret look completely cool!
You got a bargain on the coat- good vintage ones in good shape are getting rarer by the day.
Thanks for the post and the leads on the sources!

A plank of wool....what a perfect way to describe it! I love my own duffel, but I'm experiencing a mild case of coat envy right now.

Paddington? Tell it to Monty.

A fine coat with a good story behind it.

BTW, Criterion let their rights to "The Third Man" expire this year... get 'em while you can.

During and after the war in Britain this was known as "The Monty" because of his fondness for it. When campaigning he was also wore cord bags and a sweater which led to him being called by Americans, who didn't like him much, "the sweatered one." Classic duffels like this were standard issue for naval officers because of their warmth. If you want to see some being worn check out a movie called "The Cruel Sea" which is about the Battle of the Atlantic.....it's one of the best war movies ever made.

Behind on my comments. Please accept those with some sort of question.

Tom B.- I would be pissed as well. But keep up the hunt. I did for close to four years and finally have WWII in my closet. It's a great feeling.

Joe - Cruel Sea has been Netflixed. Thanks.

A nice find for sure...but I would think the fit might be baggy by today's preferences. Have you looked into a Gloverall duffle for an updated rendition on the great duffle coat? I absolutely love mine and they are THE go-to for duffles.

Purchased a RL Toggle in Olive Green wool on Ebay..great price and great garment....very long...mid-calf and I really love it.

I recently found a dark blue one with cream hooded lining in a vintage shop, but the plastic on the toggles has become stretched and the coat doesn't close properly, I'm going to see if they can be repaired, I love these coats