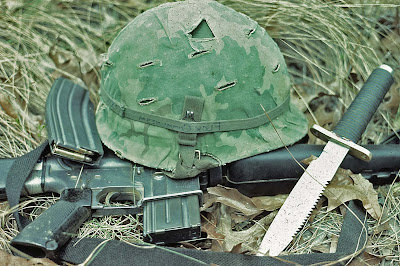 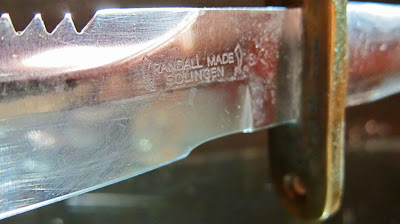 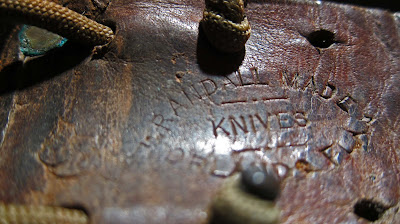 Not everyman owns a Randall.

The Randall has a mysterious aura. It figures large in the Special Forces community. Stories surrounding the knife are not stories but legends. Mine sits quietly in the top drawer of my nightstand nestled among many pair of tube socks.

The knife was presented to my father after serving as an advisor to a National Guard unit. The assignment was a 'cooling off' period and a deserved rest after his tour in Vietnam with 5th SF Group in the Central Highlands. I remember him sharpening it on an oiled whetstone. The scraping was in time to the iambic pentameter of Green Acres; his favorite television show.

Less than eight years later he gifted me the Randall after I joined. The knife received a custom handle made from green suspension (parachute) cord with blue filament accents. I was shown how to do this by one of the craftier paratroopers in my unit. Just like taping a tennis racket handle although I doubt that guy played much tennis.

A grizzled Sergeant Major asked to see the Randall during an FTX. I handed the seven and half inch attack / survival knife over. He squinted at the inscription to my father on the blade and asked, "You're father a short guy with a crew cut and a chest like an oil barrel?" The Sergeant Major turned out to be my father's A Team Medic in Vietnam and when I returned to Bragg he dug up a few of my father's team members and made sure they met me.

I got out of the Army and took the Randall to a college dorm room for four years. One night I woke up to hacking at my window screen with what looked to be an exacto knife. I quietly took the Randall out of a drawer, slipped the knife out of the sheath and held it to the screen. The hacking stopped and I heard footsteps running. I never did figure that one out. I guessed it was a pissed off graphic design major but who knows.

Eventually the suspension cord handle unwound and the handle cap disappeared but it's followed me all these years and never do I look at it without some wonder and always that question, "Why is it mine." I've had it for 33 years and I still wonder when he's going to ask for it back.
Posted by tintin at 06:15

When we were in high school, my best friend and I would regularly make the pilgrimage to Randall's shop on the south side of Orlando on the edge of the orange groves. Bo Randall himself seemed to enjoy our enthusiasm for his work. Eventually I saved up enough to buy one of his favorites with a leather handle. One of my prize possessions, full of memories.

Turquoise shaggy dog sweaters to 7 1/2" knives...Don't let anyone ever try to pidgeon hole this blog as one note.

He won't. It was the passing of a family talisman of the best sort. What a great, great post. As for the college window screen incident, I recall Crocodile Dundee...."You call that a knife? THIS is a knife!!".

where does one get one of those, sunshine?
I have a pretty well made Kukri, rather than pick it up in inja -where 99% of the stuff you see for sale is tourist junk, I got one from an armoury in nepal that makes them from steel rejected for mercedee benz susbpension coil
http://en.wikipedia.org/wiki/Kukri

I was so excited to see another person who knows what a Randall is (and why they are special)...looks like some others here know as well. I posted on them a while back, but have yet to step up to the plate and buy one. Truly THE knife to pass down to a son...you're a lucky man, no question (for the having the knife and a father who values a quality blade). Have you heard the Guy Clark song Randall Knife? I think I included it in my post if you wanted to have a listen (I wouldn't think of adding a link to my blog in the comments, but you can check my profile for the address)...best line in the song,"if a better blade was ever made, it was probably forged in hell..." and "...my hand burned for the Randall Knife..." Great song, great knife. Until I can afford one....it's Benchmade's for me.

You may enjoy this.

Have you heard the song "Randall Knife" by Guy Clark?

Here is a link to the youtube video. Let me know if you like it and I would be more than willing to send you a copy of the CD.

And I love the Trad helmet with the Reaganlike sentiment.

Ha I just noticed the writing on the helmet when I enlarged the picture to get a better look at the knife.

ZZ- Beautiful story. I'd give my left testicle to meet Bo.

Enzo- I have the attention span of a Fox Terrier on a Triple Americano. BTW, just secured a WWII duffle coat from UK Ebay. 51 pounds but the shipping is about the same.

M Lane-Thanks for the reminder on Dundee. Maybe I'll bring it to dinner.

Sweetheart -One goes to Orlando, Fl. Or, one googles Randall. No need to even get on a plane.

Joe- An old friend sent me that song a couple years ago. Lyrics are a little sticky sweet but I do like his guitar. You can post anything you want here.

Duck- Yes. And I have the song. Thank you for the offer.

Ben- I can always depend on you for the details.

Memphis 88- Didn't want to make it obvious but I guess I did.

Glad you liked it, tintin. To a couple of teenagers with no money, Bo Randall was surprisingly receptive. He truly seemed to like our adoration, especially when we returned again and again. He's gone, but his son and grandson are still there. And I think their current production is as good as the old stuff was, minus the memories, of course. But you can make your own once you have the knife.

Joe - Here's the link to your piece on the Randall. I like your blog. Very clean format which is what I strive for here.

Joe- It would help if I posted the correct link. Here it is:

Masterful. It's under it all, both the emotion of a child, special forces, their psychology... still all of it forceful and ever- silent. No mucking it up with nostalgic words which is not their way and I think a fitting tribute. I'll guess he's the sort whose motion on this earth is far stronger than any words meant to describe it. The quality of the gesture and what it meant to his son is the sort that moves: Emotions, mountains, troops, and memories.

Really, as close to a masterpiece as I have seen you come and not for the words.

Blush- You make me blush.

Yeah, he's a man of very few words. Almost like Lurch. I remember he was moving my mini bike when he dropped it on his foot... at that point he was a man of very loud words.

Where I come from, you NEVER, EVER, give something to someone and then ask for it back!
It's just "not the done thing" -- as the Brits say.
The Randall was indeed a treasure. But I found a better hand weapon in the form of a Japanese-made (Samurai-sword quality steel) bush knife that resembled a professional chef's meat cleaver. Heavy, sturdy, and excellent for chopping wood (or other objects).
Final word on the Randall. A simple hardware store crutch tip is an adequate handle cap.
Best personal weapon I ever carried was a pre-WWII Colt .45 pistol -- far better than the 9mm Browning I was later issued and immensely superior to the Italian Beretta crap currently issued that will fall apart all on its own.
RE: Blush's Comment and your reply.
Fewer words are better. My favorites are the the MF and SOB phrases, spoken loudly when I screw up. Which is often.
As an aside: In SF, when a good man died, we didn't do long eulogies. We simply said "He was a good man."
...And so it goes.