"M" Magazine - Why Not A Different Dinner Jacket 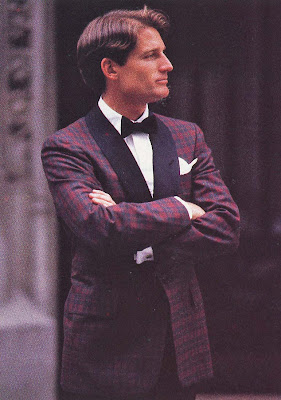 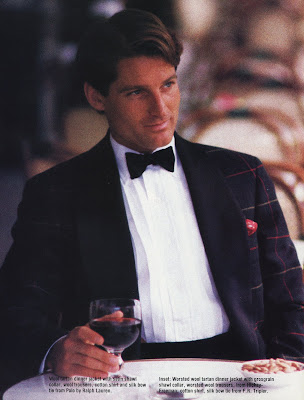 I searched every October, November, December and January issue of "M" for the 'Why Not' feature of the tartan dinner jacket and nothing. Recently a reader asked me where he could find the August 1986 issue. When I pulled the issue I couldn't help but notice the ads and features were for winter clothing and wondered, "Why Not?" Flipped to the back and there it was.
Posted by tintin at 05:47

Tintin,
Just stopping by to wish you a merry Christmas
- anonymous

"M"-a magazine that is sorely missed.

I kid you not, I once bid unsuccessfully on double-breasted shawl dinner jacket with a spider-man web pattern. Ridiculous as that may sound, it looked great. DKNY had specially made it for the producer of the recent movies, and thing went for 1500 quid.

I had that RL jacket in the late 80's. I wore it with a pique shirt with detached collar.
The quality was second to none, the wool was thick, and the gross grain was amazing.
My mother worked for an add firm and could get the clothes with the labels cut out. They were used in photo shoots and were so small that only a 19 year old undergrad (me) could fit in them.
Were it with the pants from a barathea wool tux that was in the same shoot,

What the hell happened so fast that a Tartan dinner jacket is like unknown on the west coast. Even people who move there from the east just don't remember it anymore.

I put on a tartan jacket with peaked lapels, yesterday (no, not a dinner jacket, but I used it as one) It fit the occasion so well.

One of the gay hosts, group of gay european bankers, swooned. My girl actually got a bit nervous. He said, "you finally look so American...so John Kennedy, I love it!" I could've kissed him...

In college my very hot date dressed up in her dad's tartan jacket and black leggings.
I don't exactly remember what the theme was but it was one of the happiest nights of my life.

Thanks for another outstanding post. I threw out the limited number of M's that I had accumulated circa 1992-3. Oh the regret... I don't think there would be too many people upset if you posted more pics like this.

Both dinner jackets are fantastic! I do think that the first one - would go well with someone with lighter hair; the second is right on perfect.

This sort of post is why I think your blog is valued - you exemplify the style and provide guidance. Thank you.

It's a very 80's pic-no piercings, no tattoos, no designer stubble-just a handsome, well-dressed, well groomed guy. How passe'!

victorian dance hall christmas what what?

Rules for My Unborn Son said...

In my favorite movie of all time, ARTHUR, Dudley Moore's character hosts an engagement/Christmas party at his country estate. His future father-in-law can be spotted wearing a Stuart plaid dinner jacket with a shawl collar.

That movie is a trad's dream. Another case in point, John Gielgud as Hobson sporting a pocket square in the breast pocket of his pajamas.

Anonymous Christmas greetings. That's a first for me. Happy Christmas to you.


Richard M- I just finished Fairchild's book, Chic Savages, hoping there would be some details on "M." He mentions it only once. Odd.

Anon- I think I know what the theme was.

Paul- Thanks. I'm just putting up what interests me. It always amazes me when other folks, of taste and erudition like yourself, agree with me.

Richard M- Hey, he even parted his hair. That's a big no-no today.

Thanks Tintin,
To bad I can't spell.
M was a good Mag. if you can get it try Monsier, a tad Euro for the pure trad type but a nice publication. The 9.75 CDN price and the French part might be a turn off.

The old "W' was much better, too-now just another celeb rag.

I really like dinner jacket especially this one. Very simple but very smart and classy.

I need to find my husband on of these. Brooks Brothers had one a few years ago and we missed it.