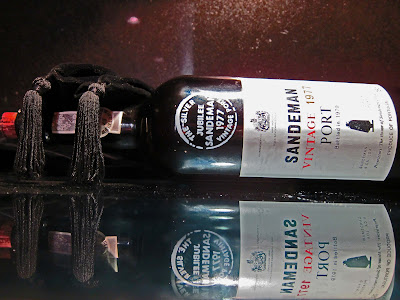 That's the belt from today's smoking jacket. I'm cheating but I think velvet pairs well with Port. Eight years ago I secured a 1966 vintage that was not too dear and simply delightful. Those days are long gone with the '66 pushing it's way upwards of $400. This delightful '77 is just a smidge north of $100 and it amazes me.

I was first introduced to Port whilst working in London. Lunch for two back then consisted of a couple pints of bitter each before eating. A shared bottle of wine with lunch and port with cheese afterwards. Then it was back to Lloyd's of London where the common practice amongst brokers was to pitch their risks to underwriters who were pissed from lunch. Of course, almost everyone was pissed from lunch.

I returned home, somewhere in the Midwest, and my Midwest wife told me if I didn't stop talking like an affected asshole she was going to knock the crap out of me. You may desire to do the same just about now.

I decant Port and instead of a candle I use a torch. Makes the process a little less charming but far safer. Ports have a lot of sediment. More so than a claret but it doesn't have to be wasted. I was taught by a budget minded Scot to eat it on a bikkie. The aroma of Port sediment reminds me of Cusson's Imperial Leather hand soap. Distinctive and comforting but how that little decal stays on the soap is nothing short of magical.

Port with Stilton cheese and some walnuts after dinner beat the bloody trousers off a pudding any day. A creamy Stilton cut with the velvet sweetness of Sandemans whilst munching on walnuts is something in life to cherish. It's... civilized. Like that velvet smoking jacket. Two luxuries that have become necessities.

Another luxury I enjoy in the states is catching up on the London social scene via Tatler magazine. My English friend Mutley and I were on the train in that Midwest place and discussing his insurance retention on a recent mishap where a stone kicked up by a lorrie cracked his windscreen.

Once that was settled, I pulled out the latest issue of Tatler and pointed to the page with the party photographs. "Oh, if we were only back in London, Mutley" I said, admiring a photo of Alice Beer's cleavage wrapped tight in some gauzy fabric resembling a cummerbund. Mutley took a sip of his Old Style, looked at me disapprovingly and said, "Tintin, those people would never talk to you." And rightly so.
Posted by tintin at 03:33

Met a chap on the boat back from Venice from Portugal who was fascinating on how to crack the neck off the bottle of vintage port and how many hours it needs to breathe.

I love port, but prefer the ones with regular cork, less mess that sticking tongs in the fire... Just bought my Christmas Stilton, best bit of all.

How I miss the days when everyone was pissed at lunch; curse of Balls Brothers - go for lunch never to come back.

You haven't missed much in tatler conversation-wise. Though by your post, that's not quite the point for you!

What a delightful post. As you say it all seems so civilized. A commodity that is becoming rarer and rarer. Thank you for trying to preserve it.

Any guy who drinks on a train is fine by me. This Mutley cat sounds like the real deal.

Oma tells me there used to be a rule that if your picture made it into Tatler then you had to buy the drinks next time out...

ELS- There is a skill to knocking the neck off a port bottle although I don't have it. I have a trick that I've used with some 19th century vintage Verdelho Madeira (1855 & 1880) back in the day when it was still affordable in the early 90's. ($250 and less). And that was to ask a restaurant if I could bring it as a after dinner bev. They were so curious they were happy to decant which was a major pain. Crumbling corks etc. They're reward was to share a glass with us. It was a lot of bang for the buck.

James- I got out of the National Park Service because of preservation issues. That administration (RR) didn't really seem to care much. I still don't know what Republicans ever saw in that guy.

LAS- That's the Chicago Metra. They sell canned 16oz Old Styles and Special Export for $3 in the Northwestern train station. I know some folks who read this who are still taking that train. Maybe they can tell us if the price of beer has gone up at all. And you're right about Mutley.

James- I have some friends who still keep the Tatler they were in by the bed in their guest room. But they don't say anything about it so it's a suprise as you're flipping through this old Tatler and come upon them.

M Lane- I asked Cathy why she didn't do a cheese course and all I got was the Gallic shrug. Next time I'm bringing my own cheese.

ADG- Man, you missed the whole point of this. First trip to London? Come back to the states talking like you're from London? Wife tells you to shut up (you do know shut up). I tell her to push off. Things get worse and to make a long story short I push off. Now stop just looking at the pictures (notice how much better they are than yours?) and read the post the next time.

Tintin...stop picking on me man! I'm the only one who can throw barbs in this exchange. Don't challenge me. Don't insist that I integrate context into your nuanced lines. I'm not that smart. My mother smoked and drank when she was pregnant with me.

Whilst you may gain pleasure from pointing out that I didn't "get it",I find it insulting.

Nice brief and this mail helped me alot in my college assignement. Gratefulness you for your information.