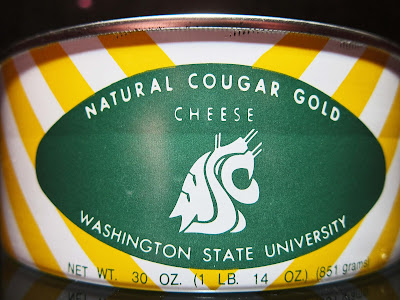 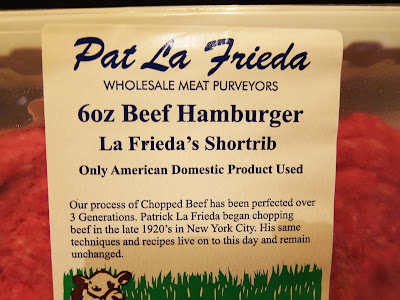 Burger
A Christmas tradition growing up was that can of the 1st King - Cougar Cheese. An uncle was a professor at Washington State and every relative must have been on his Christmas cheese list. I was surprised to receive a can as a gift this year and a little misty to see it in the same packaging. It's a rich and crumbly cheddar. Almost white and as sharp as an A Team leader's Randall. Not on the gourmet radar but at $18 a can it should be.
What is on the gourmet radar are these burgers. I've been a fan of cheap chuck, 70/30% fat, burgers for years but the La Frieda shortrib burger- the 2nd King - is pure art. Nutty with an aroma when it's cooking that reminds me of a Cuban cigar. It's a musty smell that wakes up the primal, 'I gotta kill something.' The minute they hit the pan I begin to salivate like the wolf in the three little pigs cartoon.
Lay on thinly sliced Cougar Cheddar and after 30 seconds stick it on the 3rd King - A Martin's potato bun. Almost sticky in it's dense moisture - it sucks up the blood from the burger and the oil from the cheese and is the perfect wrapper for the whole of this affordable luxury.
I may not be able to drink forever. I'm not going to be able to have sex forever. But I'm gonna be eating forever, at least my forever, and there's no reason to suffer while I'm doing it.
Posted by tintin at 07:41

This has to be one of the top post of this or any Christmas season. May the Three Kings visit you for many,many years to come,

Marvelous. I am really glad I read this AFTER my lousy bowl of oatmeal!! RED MEAT FOR LUNCH!!

Sure as hell aren't going to find that one readily availible. It's the stuff of butchers with Rollie Fingers's staches and blood-stained aprons strained over equitorial waistlines.

Well, and when you can no longer have sex you've got all those neat bowties.

I kid because I love

I love Martins! I turned my Wife on to them. Next time I get paid I'm ordering a can of cheese.

James- Big on Three Kings in my family. The built in excuse for being late on Christmas.

M Lane- Have you ever used the mini crock pot to make oatmeal overnight? It really works.

Stew- Hen's tooth. Thanks, I'll use that with the butcher next time. How do you say hen's tooth in Spanish?

Snidely-"Next time I get paid I'm ordering a can of cheese." I just want everyone to know that's the title of my new novel.

Giuseppe- I would never guess you'd be interested in 'New York' hamburger.

I salivated just reading the post. You are on the money with the MArtin's rolls. Great post!