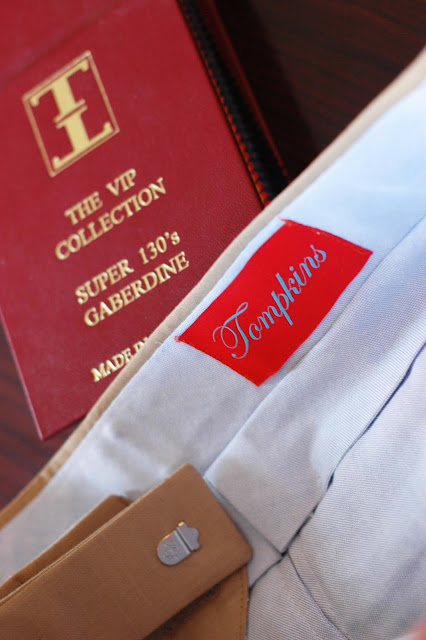 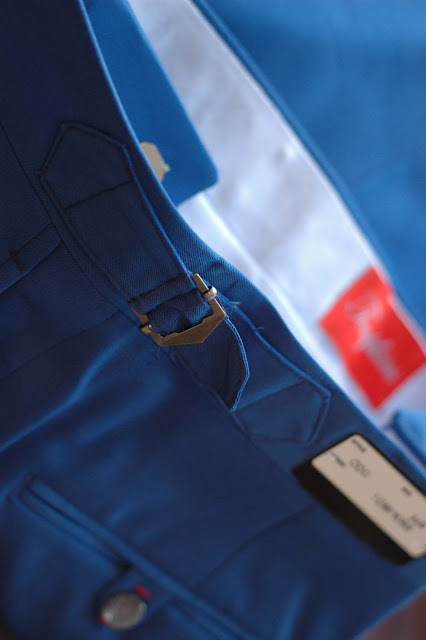 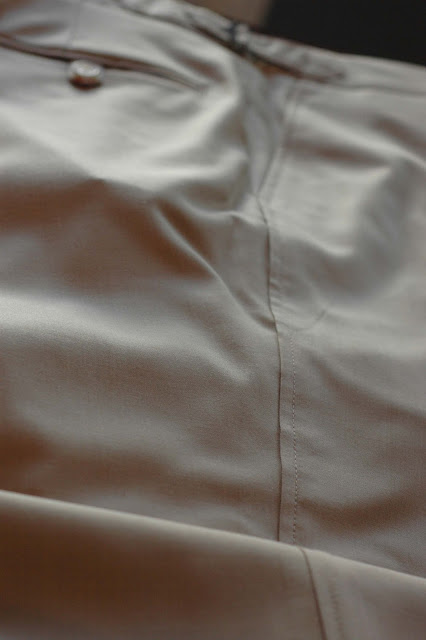 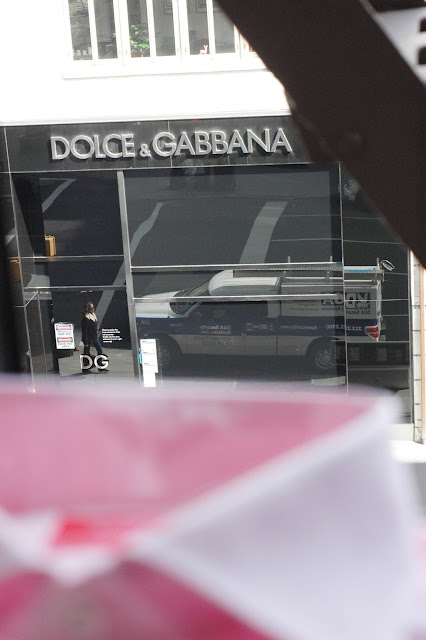 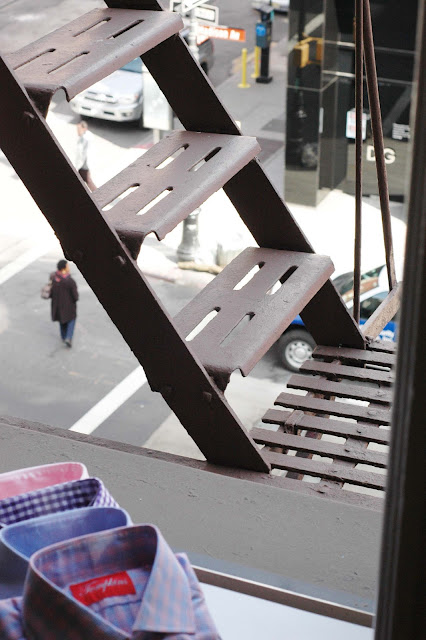 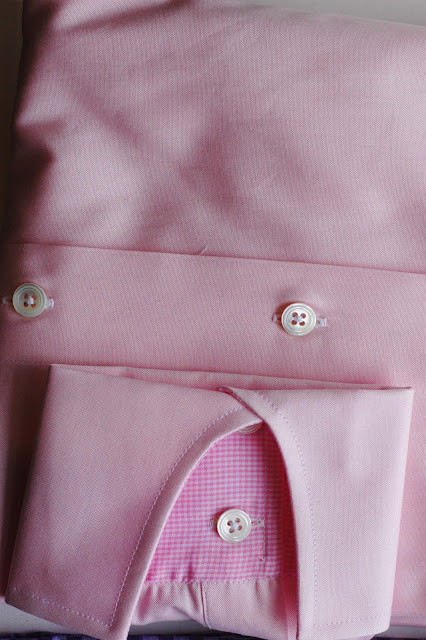 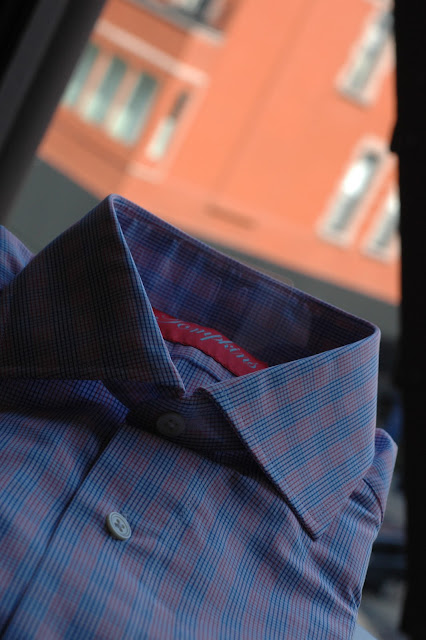 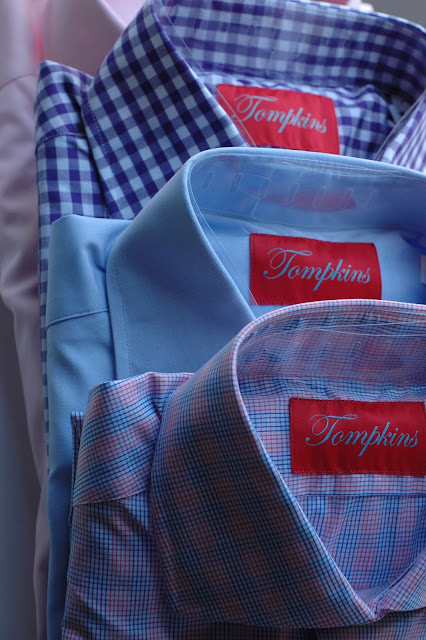 Being from nowhere --  I never get homesick  -- depending on the company.  Even though Clay Tompkins and I come from vastly different places...we share a connection over London.  I worked in London in the late '80s and never once was homesick but ever since, almost every day,  I get a little homesick for London.

Clay's line of shirts and trousers bring back bits and pieces of London and that language of clothing.  Side tabs and cocktail cuffs are giveaways of bespoke in the wine bars and pubs of the financial district known simply as, 'the city.' I was fascinated with these details  having come from button downs, center vents and Tiffany monogrammed buckles.

It was a uniform in every sense of the word but like the branches of the military...insurance men dressed differently from advertising men who dressed differently from bankers.  Each sent out very clear messages about who they were or who they wanted to be.   Americans seem to stick out like a sore thumb, until acclimated, and then they begin to adapt. Usually slowly.   As an army brat, I went native inside of two weeks.  Out went center vents suits, button downs and tassel loafers -- In came side vents, spread collars and cap toes.

Clay has taken subtle London design cues, not to mention some humor, and had it all made in the US.  A trouser by Brooklyn's Julie Hertling is a magnificent thing. Even more so when made from a 130s gabardine.  Light but tough, you shouldn't blow through the crotch for donkey years.  Shirts are made in NJ by Mitch Gambert.  The party pocket will hold one condom, or 'rubber' as it was known in my time, but not an 'eraser' as it's known in a London office.  There's also an optional iPhone 5 pocket which I chalk up to Clay not being that far removed from Wall Street.

Right now proper winter weight trousers are on sale for $150.  That's a steal for Hertlings.  An updated web site should be up any day -- along with a stunning Savile Row like navy blazer with that distinctive flair below the waist which dates back to 18th century English great coats.  Nothing like wearing a little history.  As someone once told me about my being homeless, "You have a home...they're your friends." True, that.  Give Clay a call.  You never know...you might score a great pair of trousers and even find a friend.
Posted by tintin at 12:16

Thanks - is there a reason behind the placement of the pockets?

Nice post and reflection tintin. I also reflect, with regularity, upon my time in London and how I wish to return. I lived in a flat just off the High Street in Kinsington. The Britannia pub 3 buildings down from mine. Perfect distance to crawl home from! Clay has some nice pieces. Thanks for introducing him.

Clay responds immediately to emails. Even in the evening. Once that happens you have to order something.

How are the shirt in terms of quality? Match up to David Mercer? Does the pattern on the yoke match that of the sleeves?

I spent a summer in the City at a big firm; I loved everything about London except the work I was doing. Had a stupidly incredible flat with a balcony across from the Globe and the Tate Modern. The highest living I'd ever experienced, now the highest living I expect I'll have.

God those cuffs are incredible. I wish someone (CT? Lewin?) would put that hay down where this (clothes) horse can get it.

Dallas- Clay advises, "The pocket and "holster" are under the left arm because most people are right-handed and the gesture is natural. They are positioned, especially in the case of the "5" so that the phone is easy to grasp but high enough on the body so the shirt doesn't pull away from the body. The slim fit makes it work."

Smitty- Our corporate flat was in Fulham. Not what I'd call posh but the neighbors were nice.

Anon 16:06 - I hear he's the Fresh Direct of sartorial delivery if you live in Manhattan.

Matthew- Certainly the quality is there and rivals MTM. I'm not a fan of Alpha sizing (S,M,L,) but Hamilton in TX sells a Alpha shirt for $245 which is fucking vulgar. Maybe that's just the Texas way, I dunno.

JKG- If Clay we're selling these shirts in the UK, for what he's getting in the States, he'd be rich...again.

I understand shipping to the UK adds a hefty fare. Clay should hire me to manage small kiosks in London train stations and airports offering only trousers and shirts. And I wouldn't live in Fulham.

Soooo, as an actuary in London I wouldn't wear Dockers and short-sleeved polo shirts like my American colleagues? What makes us "insurance" guys' uniform?

W Essex- Where in the hell've you been? Is this a trick question?

Alright, I'll take a shot...By insurance, I mean Lime St and mostly Lloyd's of London which was my client, territory, carrier, etc. The Lloyd's uniform is mostly dark. Navy or Grey, usually striped and often double breasted. Shirts are striped as well with the older set favoring contrast collar and cuffs. This is 'old man' for the younger men who prefer stripes on collar and cuffs and always split yoke. Shirt colors are usually loud with solid member's ties. Many men have more shirts than ties wearing the same tie throughout the week.

Shoes are usually black and cap with Monks here and there. And the Ameriphiles sporting tassel loafers they bought in the states and expensed as a restaurant. Socks are usually bad. Sometimes in bright red or bottle green or stripes.

If you look at the ground floor it's as if there's a sea of navy and grey with a smattering of women if color.

Ad men are much more fashion forward -- Trendy labeled suits, bright linen jkts in Summer. Never allowed on a man in Lloyds. A kind of Hugo Boss, Gucci, black sweater with suit and Montrachet swilling in the wine bar -- Mainly dressing the way a Lloyd's man might for the weekend.

Of course, all this was taught to me by General Izing, retired army and lead underwriter of Sturge Non-Marine.

Thanks Boss. I recently interviewed for a gig with Allianz in Munich (eg, with lifetime employment contracts one older guy had no problem smoking in his office). Very nice, but not nearly as cool as you describe The City.

Oh yeah - Did you work in the shiny Lloyd's building on Lime? It hurts my eyes.

W Essex- I did. But I tried my best to stay at the Lamb in Leadenhall Market.

W Essex - go to Leadenhall Market on a Friday evening - hell, Friday midafternoon - and you'll be surrounded by these outfits. Show up there in Dockers and a polo shirt and you'd by laughed out of the place.