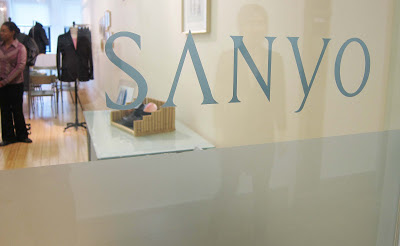 I've never owned a Sanyo raincoat.  Can't vouch for it keeping you dry or warm.  Not sure how Sanyo slipped by my 27 years of business raincoat ownership.  1985 was the year  I bought the first one.  A Burberry knock off at an unremembered men's discount store somewhere in Manhattan. The wool collar sold me. It looked just like the one Mike Wallace 'popped' on 60 Minutes.

Just after buying my coat, I spent a couple weeks watching a buddy's apartment and his two pet cray fish in Spanish Harlem. Walking to the subway one morning,  a couple kids, no more than 12 or 13, came up a hill on bicycles and one of 'em yelled as he rode by, "Hey, Asshole! You're supposed to tie the belt not run it through the buckle." I hope that kid's blogging today. 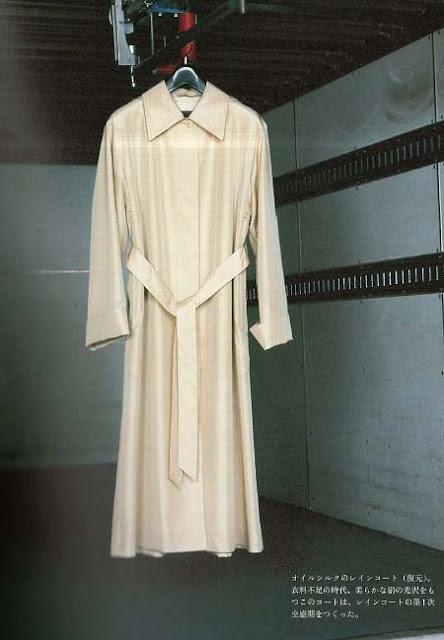 I have a never ending supply of stories about raincoats. How I lost 'em, how I found 'em, how I destroyed 'em and how one, my first real Burberry, got me all wet. Well, half of me. My stories, save the lady who  met me at the airport wearing only LaPerla under her trench, can't come close to the Sanyo story.

Above, is the first Sanyo raincoat made in Japan after WWII out of surplus parachute silk. Made for women, there was a waterproof finish covering the 'chute. Turned out to be a hit with the ladies and Sanyo was on its way. 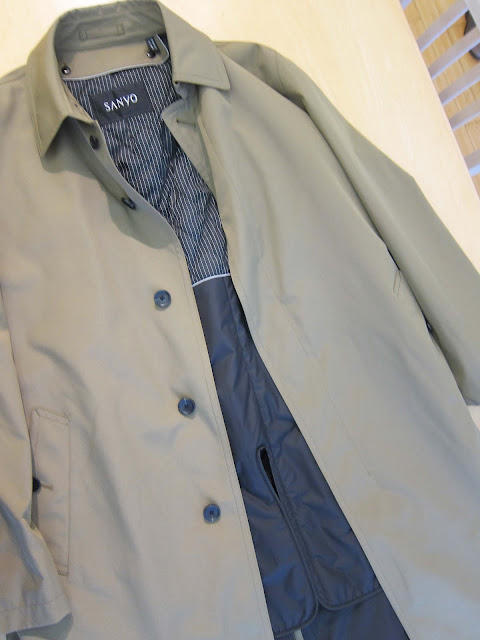 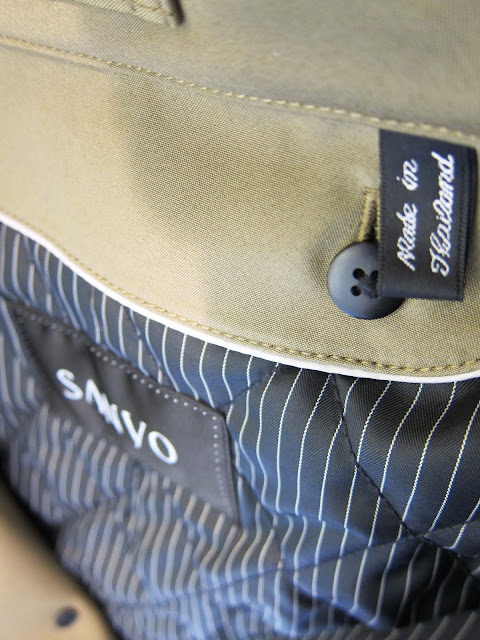 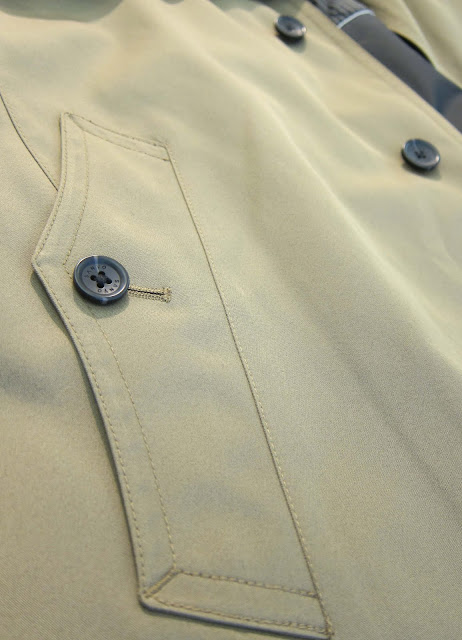 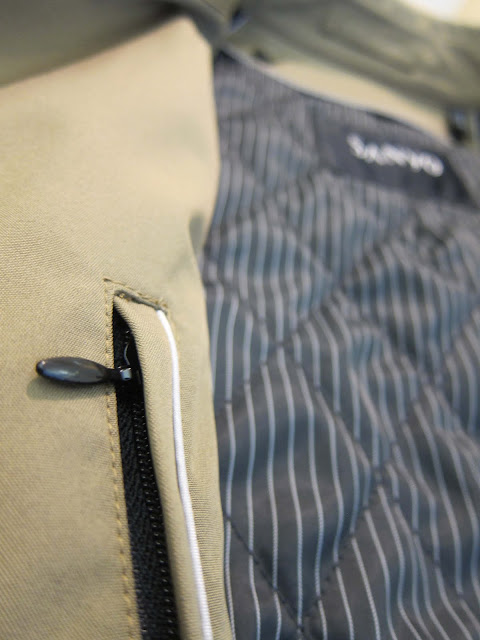 The Gold at $495 is available here

Simple and straight forward.  It won't kill you to leave it in a Clearwater Beach hotel room.  It has a lining but it ain't gonna get you through a Chicago winter; not that any raincoat lining will.  If you have kids going to college in a few years, drive a Buick and own a beat up piece of shit that's been a train car for the past seven years -- This is your coat. Sit on the upper deck of the 6:31 Metra, and as you drape the Gold over the railing you will not be embarrassed by the Sanyo label -- Unlike the guy with the Jos. A Bank raincoat who sells scented urinal cakes for a living. 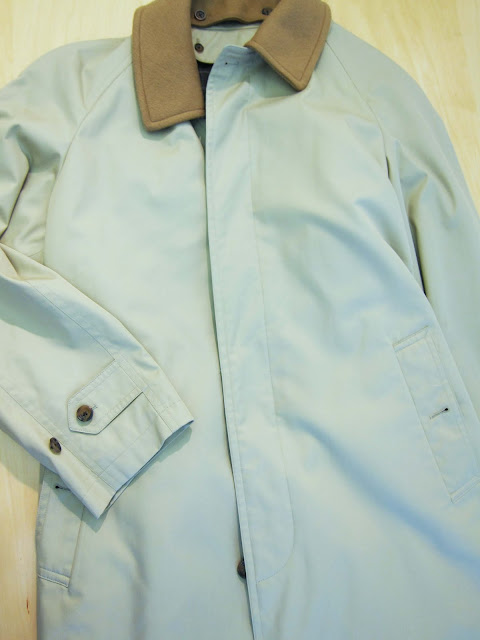 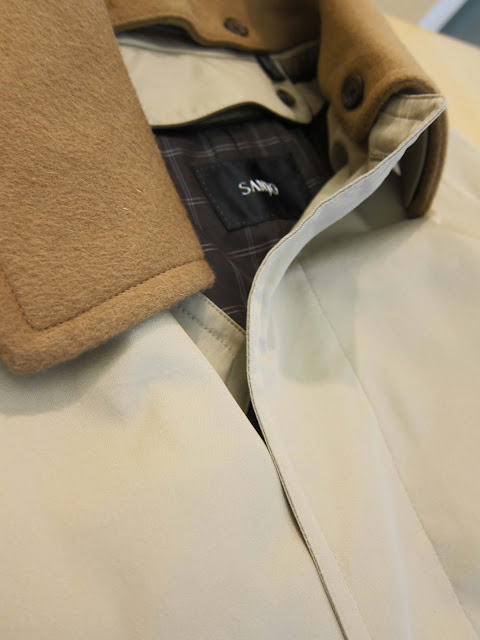 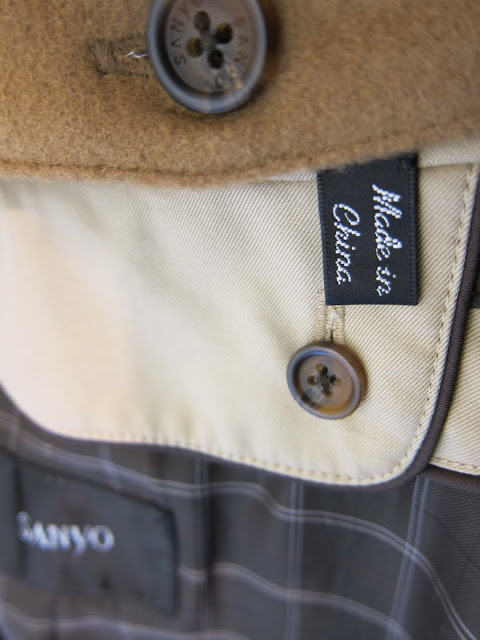 The Cortlandt at $798 available here

It comes with a belt.  I don't like belts.  Unless it's Friday.  I had a belted Aquascutum in the early '90s when I was making a worker's compensation video for Major League Baseball at Comisky Park. I was 30 pounds lighter and that belt made me look like a sausage link.  You can dump the belt on this all cotton number but I'd keep the wool collar. You'll look like Mike Wallace.  A 44" length gives you plenty of room and keeps you from looking like so many of these uber-urban storm troopers in short black trenches and black suede Ferragamos.  Geez, I hate those guys. 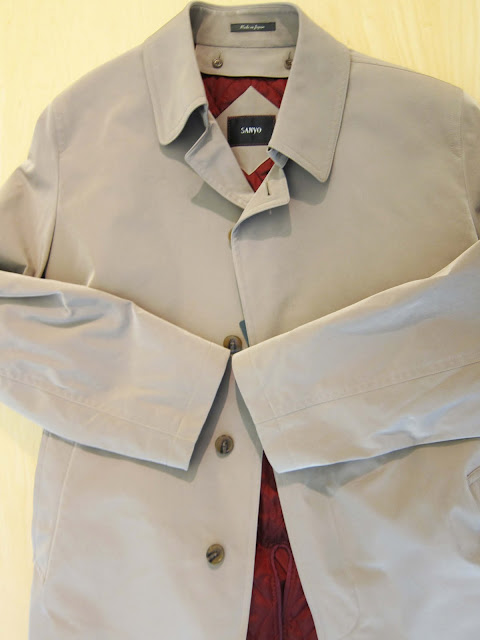 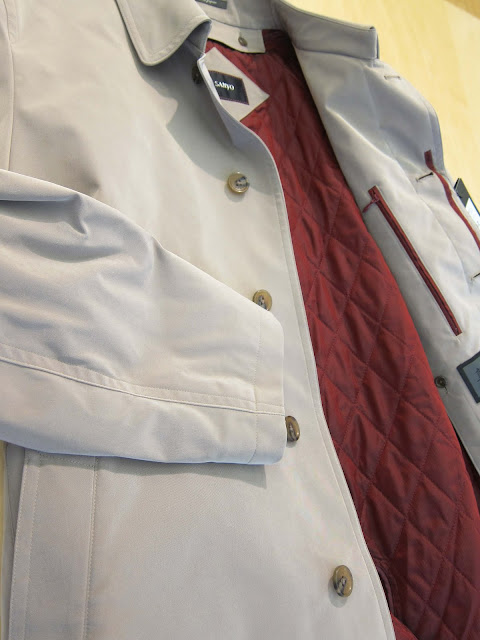 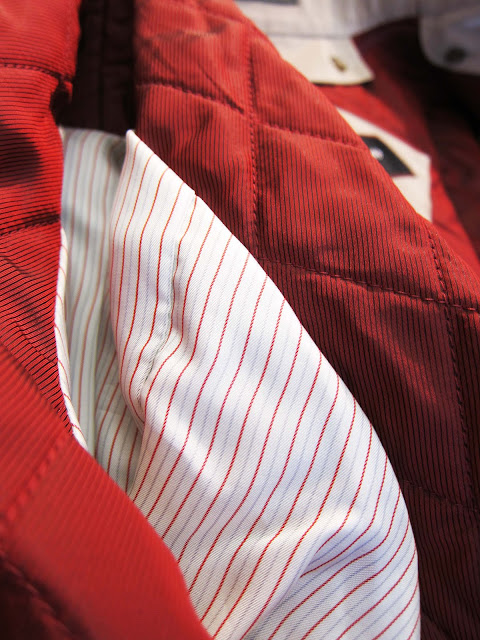 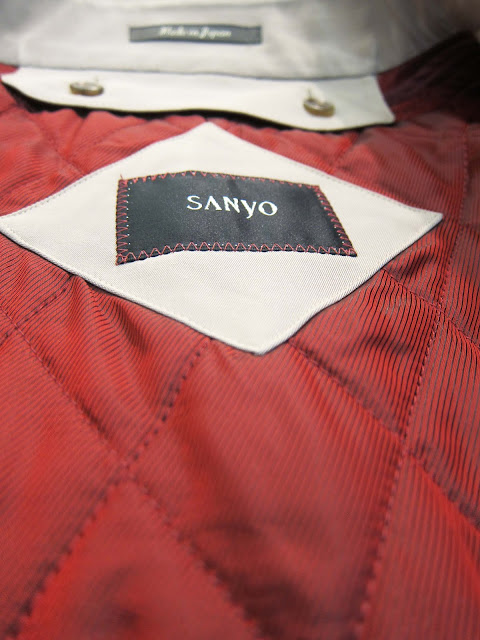 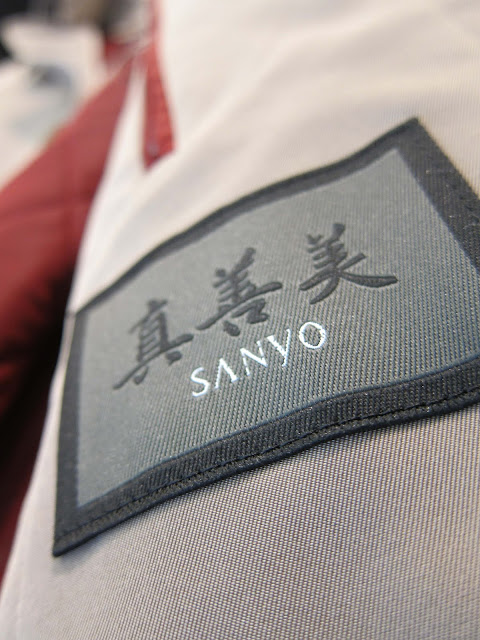 The Savina at $995 available here

The top of the line Savina is made in Japan and looks it.You can see and feel the difference in this coat which I would not want to leave in a hotel room.  And while it tops out on price, I suspect it's a real steal and a helluva good value.  At 38",  it's only six inches shorter than the Cortlandt --  far from storm trooper length.

Made in a factory whose region was hit hard by the 2011 earthquake and tsunami,  Sanyo will keep the production there to help out the economy. The Japanese symbols on the label above stand for, "Integity, Quality and Beauty." For me, this coat stood out from all the others. It wouldn't look bad with a girlfriend's  LaPerla either.  Not a bad idea for Valentine's Day. I mean, if you're gonna do it right -- Might as well go all the way.
Posted by tintin at 17:34

Odd how the trench coat always has a back story. My first one was a London Fog with a zip out lining I bought in 1980 in an outlet in Blacksburg, Virginia. It served me well for over 20 years until certain structural changes in its owner made it difficult to put on.

Many thanks for this piece--quite the enjoyable read. When it rains...?

Good review and story! The kid on the bike! Fabulous! Sanyo makes a terrific coat, but I always felt it was too silk like in feel...a poly vibe. I currently own a trench that I purchased at the Hugo Boss factory (candy store) in Stuttgart, 1996. They have/had some nice pieces there...made in Germany.

I never thought a raincoat was something that I'd get compliments on, but I got a Sanyo at a sample sale in the Garment District about 8 years ago, and people are always saying how great it looks. Of course, it has never received the ultimate compliment--the La Perla airport pickup.

Make me wonder if Sean Connery was wearing one (liberated from a thug, along with a pair of black and white wingtips) in a fight scene in "You Only Live Twice." Extra cache if he did.

I'm not feeling a lot of love for Jos. A. Bank coming from you these days.

My first was in the early 70's. It took years for my first "serious" girlfriend's "Charlie" to fade. It lasted longer than we did. My son wore it a couple of times in high school. I finally broke down and donated it to the Vets last year.
And it was the 6:41 Metra.

David V - Most clothing lasts longer than relationships. Unless a designer is involved. And, no, it was the 6.31 - PM From Northwestern to Lake Bluff. A 16 oz Old Style or, if I was feeling flush, a Special Export on the ride home. I miss that like you can't believe.

Great post. My go-to is a Burberry styled much as these Sanyos. Single breasted, raglan sleeves, long, beltless. Doesn't seem to be offered anymore. Coats are addictive. A pair of Barbours, a few Filsons, and long Irish tweed overcoat from Orvis fill the closet.

you're going to need more than that today, buttercup.

Surly- D'oh. Obviously I lived for the Cubs. Comiskey reminds me of a shopping mall.

They used to be made without belts. In Japan. And they were a bargain, and a steal on sale.

One of my husband's favorite combos:
Trenchcoat & La Perla...

Great blog!!! Thanks for sharing.

Women's Clothing- Don't think I don't know what you're up to but your corset page saved you.

Nice Post
I picked up a Sanyo chambers black coat during an epic NY rainstorm years ago. It was half price and I didn't have a clue what I was buying. Its never let me down and still looks great.

I need to diversify a bit now. How do you think the Savina taupe compares to http://www.brooksbrothers.com/BrooksStorm%C2%AE-Single-Breasted-Long-Trench-Coat/ML00225,default,pd.html?dwvar_ML00225_Color=NAVY&contentpos=52&cgid=0222

Nice post
how do you think the savina dark taupe compares to this BB for business wear
http://www.brooksbrothers.com/BrooksStorm%C2%AE-Single-Breasted-Long-Trench-Coat/ML00225,default,pd.html?dwvar_ML00225_Color=NAVY&contentpos=52&cgid=0222