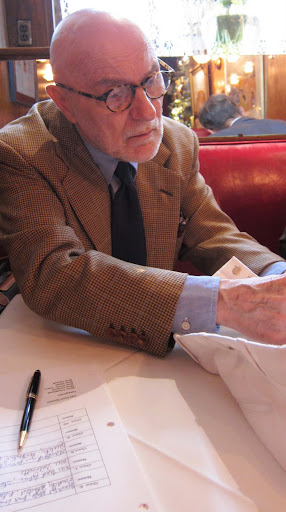 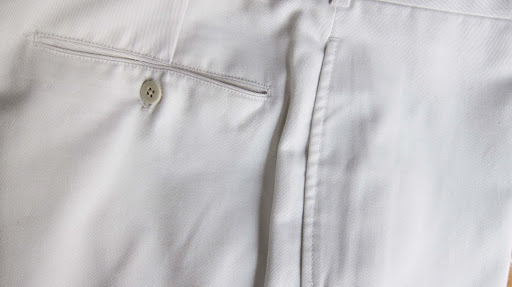 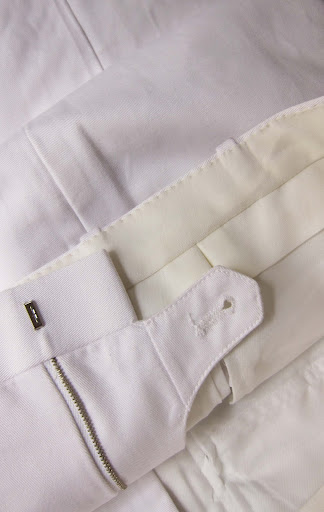 Made by Martin Greenfield $275
The NY Times recently featured a $550 khaki made for Band of Outsiders by Brooklyn tailor, Martin Greenfield. Band of Outsiders is a brand so irksome in it's faded Polaroid hipness that I refuse to link it here. The Time's piece questions a $550 khaki in this economy but stops short of any real criticism. Instead, the paper quotes a consultant who suggests, "It's not about the price...it's about who's wearing them..."
There are a lot of guys, not as many as before the depression of '07 but there are a lot of guys who pop into Bergdorfs and don't give a second thought to dropping $550 on a pair of khakis. This is the same kind of guy who has a fur lined sink at home. I'm not sure I want to dress like a drunken sailor but what if I were to tell you that J. Press sells a Martin Greenfield khaki for half the price?

Press only had a sample in white but the pant can be ordered in khaki as well. All kinds of bangs and whistles including a full lining are offered and inclusive of the $275. Bruce gave it a 90 and called it, "well made and clean, trad silhouette, nice fabric" while Robert thought it deserved a 95, "fancy maker, twill fabric, dress make, tab waist, high rise, cotton drill." Both men awarded it winner of the "Best Dress Chino" category.
It's a damned nice pant and it has me wondering. Last winter I broke out a suit maybe five times. Instead, I reached for a Shetland sweater and wool dress pant over and over and never was I under dressed. A dressier chino pant with a decent shirt, an interesting belt and serious alligator loafers could take the Casual Friday uniform of, Dockers, golf shirt and Kiltie loafers, to a whole new level.
$275 is a lot of money for a chino. But what have you spent $275 on and had nothing to show for? A round of golf? Dinner? A bottle of Champagne? A long night on Hay Street in '77? Think of this chino as a chilled Antinori chardonnay from Umbria- rich and elegant but understated and cool as you stroll up Lex crossing 62nd on a very hot August afternoon. Suitless and tieless but well turned out and turned up.
Posted by tintin at 06:24

Lovely chinos from Greenfield, it seems, even in white.

What I really appreciated about this post though were your very candid comments on the "faded Polaroid hipness" of brands like Brand of Outsiders ( or short "BoS" to insders ...or would that be, to outsiders, in this case?). The fact that we can observe an increasing interest in properly made and conservatively styled yet up to date clothes may be a good thing, however, the way brand marketing has jumped onto this emerging trend by launching ever more awkward "authentic", "retro-style", "archival", "signature" brands, often sub-lines of the mega-selling high street retailers, is an annoying flipside of this development. Do I really need to know that my new pair of summer shorts was made from 234 ounce vintage cotton hand-picked at an altitude of 4300m by a group of Gurkha veterans and subsequently hand-died in the ancient Glenlinlithgow plaid by a micro-financed project of Bangladeshi orphans, under water, using only stone age tools in a secret process, passed on by word of mouth only and so old and elaborate it has religious status among certain Indian tribes, then cut and sewn by Savile Row-trained Ukrainian master tailors never using a thimble, etc etc? Or do I just want a well-made, well-fitting, lasting pair of shorts? Well, it must be the information gap between these tow options that is worth $275...

dE- Hey, would you mind sticking around here for a while? Great comment.

A bit of a coincidence - Yesterday I called J. Press and spoke with Jay Walter. Jay is the MTM department at Press; if he's on vacation, the dept is on vacation. I was inquiring about a suit and how long it would take to make, about six weeks. I wonder what the turnaround time on the chinos is? I figured Press used Greenfield but decided it would probably be best not to probe into that level of detail on the phone.

By the way, your favorable comments about Le Veau D'Or have me thinking it might be a good spot for dinner while I'm in NYC this summer. If it's the French version of Donahue's I'm sure I'll be delighted.

I hope to go to Le Veau D'Or while in NYC this weekend.

Hopefully will be dressed right.

What should I order?

Sean- Tell Cathy Tintin sent you and ask her what to order. But whatever you try - you must have the celeri roumalade. You must. You'll never see it anywhere else.