Off My Back: New Old Stock 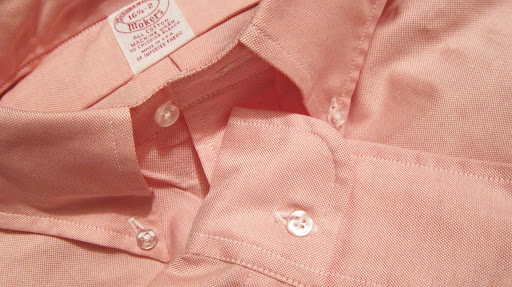 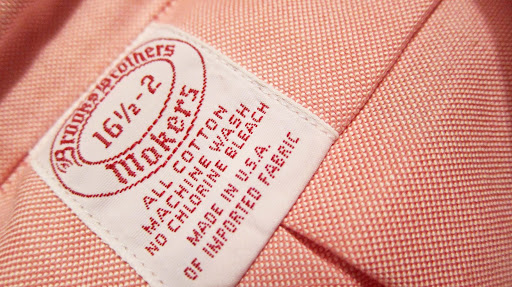 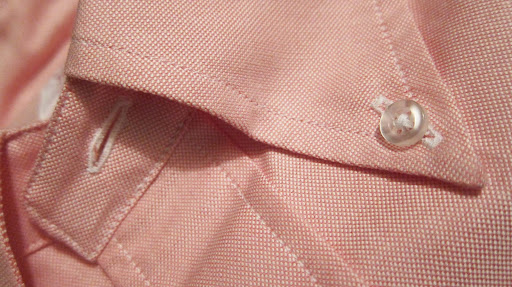 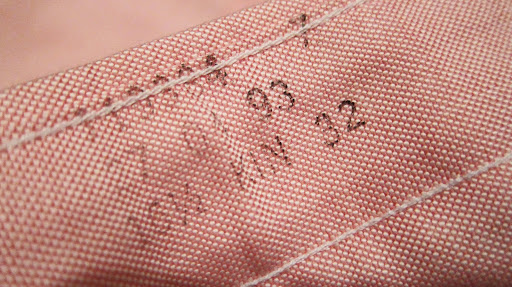 O'Connell's Clothing in Buffalo is well known to the cognoscenti as one of the few purveyors of honest and true Trad apparel. With Quoddy back ordered to God knows when - - I found a pair of Quoddy Camp Mocs ($175) at O'Connells and they were a shade under the Quoddy price ($209) to boot or to moc.
I check their web site every week because I'm sure as Hell not driving to Buffalo. Just last week I found something amazing. New Old Stock of Brooks Brothers shirts. I first heard someone say "piss shiver" when I was in the army. I swear I had a piss shiver when I saw these.
Bang the 1-800 and Ethan answers. Ethan always answers. "So what's the story on the Brooks shirts?" Ethan explains O'Connells was one of eight or so retailers who had a Brooks "store in store" concept from the late '80s to the mid '90s. They sold suits, ties, dress shirts and polos. I ask the big question, "Those Brooks shirts you have on your web site - - Are the collars lined?"
A quick primer. Unlined collars are very important to the obsessed Brooks Brothers oxford fan and here's why. It was that detail of a sloppy looking collar that actually made the shirt. In much the same way the bagginess did and still does. It is - - 110% American. Actually, it's North American but that's another story.
"Unlined" says Ethan. Pull out wallet, credit card, bing, bang, bong. Two days later it's here. A pink - I ordered pink - I haven't seen this pink in years. Softer in hue and almost peach when you hold it up to a recent purchase. Amazing.
Maybe it's better. Maybe it's not. The collar is 3 1/4" compared to 3" today. The shirt tail hits 33" compared to 32" today. But oddly the weight (on a kitchen scale) pegs the Old Stock at just over 11 ounces while the new oxford weighs in at just under 13 ounces. Odd that. Ethan thinks they were made in the early '90s somewhere in the south. Maybe Alabama but don't quote him.
If this interests you -- give Ethan a call. Chat him up and give it a go. No discount from this blog. I paid full freight - - so will you. But these little opportunities of history are hard to find in a world of J. Crew 'curatorial' washed horse pooh. You may wanna strike - - while the gettin is (a-hem) unlined.
Posted by tintin at 06:03

Labels: Brooks Brothers, O'Connells, Off My Back, The Best

Excellent post, Tintin. Way cool. I had to sit down with my glass of wine (evening here) lest I spill it all over my vintage Brethren shirt. Can't beat a vintage NOS Brooks Brothers shirt. They are better than it or anything will ever be. Pink and yellow are my currently running stable horses.

You are going to regret giving this little secret away! -Selfless service to mankind, however. Truly news you can use.

HTJ- I figure this is like an eclipse. Doesn't happen often.

Au contraire, Monsieur. My readers come first and I'm happy to settle for any scraps of oxford and madras left over.

The large print giveth and the small print taketh away.

lwing-
Hysterical. Why can't you be this funny on your blog.

I heard there's going to be a remake of Rear Window. This time it's a comedy. The wackiest across-the-courtyard neighbor is a guy who plays dress up with his dress maker form, photographs belt-draped liquor bottles and weighs his shirts on a kitchen scale. Can't wait!

that place is a gold mine. with silver mine prices... off the charts (the NOS madras pants... like cookie monster... gimmegimmegimme...)

The rumor of NOS Brooks shirts reached the Left Coast last week, and I duly placed my order. It has become something of an obsession for me to acquire as many of these relics as possible, and I fear there will come a day when the iconic Brooks shirt will be displayed at the Smithsonian.

Does "Unlined collar" mean Un-fused? I just bought my first brooks shirt monday (pink Pinpoint-slim fit) when I was visiting NYC and it's collar is fused.

I've read Heavy Tweed mention the "unlined" collar too. does that mean unfused?

What is your opinion of the current stock of the Brooks Brothers oxfords? Is the slim fit permissible? Thank you.

james- There's a Marimeko dress in the womens section I adore. I'm pretty sure I could conceal an axe underneath it.

Farrago- I think it already is.

Chico - Unlined means nothing between the two faces of cotton on the collar. Goof ball designers started lining collars so they would look better. Neater. Not as fuddy duddy, old man looking. I assume these guys are very neat and own a hairless chijuajua named Carlos. Make a good Bloody Mary. Hopefully keep their mouths shut most of the time. But don't quote me on that.

Anon- Slim fit looks great on slim young guys who are neat and own dogs smaller than cats. I'm a fat old guy who likes big dogs so I don't qualify.

I'm a middle aged thin man that likes cats. Is the current stock of oxfords at Brooks decent quality or should I look elsewhere? I also own oxfords from Bean and J. Press. The Press is too broad in the upper body. Thanks again.

Now I'm jealous. That pink may never again be replicated. Nor will the comfort of a well-worn BB oxford. You can live in 'em.

I bit my tongue on the slim-fit bit. Glad that was covered.

Thankfully my pop shopped BB in downtown Atlanta in the 1980s with a zeal bordering on psychotic.

In turn, I have all of his BB pinpoint oxfords. They're softer than lambs ears and the collars - unlined - are frayed as hell. I have/had a pink one, but the wife has commandeered it.

Paired with some Bean chinos and Weejuns they encapsulate that "drunken ex-senator" look I cultivated well in college.

Retro look at retro pricing!
What's not to likie!

The original, made in US, gotta wash, regular fit Brooks Oxford is still a good shirt. When they're 3 for $199, not a bad deal at all. But they're getting hard to find. Some stores don't carry them but only the wash and (spit w/ disgust) iron.

Stew- I had my 1st BB oxford (pink) from 1984 until 1994 or so. Sans a little wear on the watch cuff, it was a great weekend shirt until one day I took it out of the wash and the collar had blown in half. I get misty just thinking about it.

Masion Fu- Ask for Ethan. In fact, everybody that works there may be named Ethan. This isn't 'retro' - This is history.

Drat, nothing in my size.

You are becoming the Bruce Weber of the OCBD.

I'm pretty sure my monitor is giving me a true representation of the colors, but how does the pink NOS BB compare to the Mercer (assuming you have one of the latter)?

How do you regard the current stock of oxfords carried by L. L. Bean? Are they to be considered? Where is J. Press on the scale regarding quality? Thanks again for answering my inquiries.

Sorry, do you advise avoiding the no iron altogether? Thanks much.

We had a term for the gentle curve formed by the properly ironed collar of such a shirt: The Parabolic Arch. Parabolic as in freshman physics. Arch as in supreme and arch as in architectural.

Anon 18:40 Don't have Mercer Pink. Will have to remedy that.

Please excuse this question for begging the obvious, nevertheless what technically qualifies a roll collar? Thanks in advance.

Anon 22:36-
What makes a good painting? A good photo? A good film? Hard to say 'technically' but you know it when you see it. Live long enough and you know a poor collar roll versus a beautiful one. One of the best I've ever seen and own is a Willis & Geiger white button down from 1995.

Proportion is huge. The collar can't be too small or the opening too wide. The collar material shouldn't buckle anywhere around the neck. And the roll doesn't squat like a wild man in the woods.

It is a soft turn down at the collar opening and looks as good buttoned up as it does open. Picking the right size is critical. If you have a big face you don't want a little or tight collar. You must consider proportion. Hard to put into technical terms but I hope that helps.

I noticed this on the O'C's site last week sometime and just assumed it was something that had always been there and I hadn't noticed before. I thought about going for it (especially in light of the variety of striped options) but I didn't, mainly because of the price tag. I have some BB slim fits but I don't mind the fuller cut. A few months ago I picked up a blue one at Goodwill (cotton, USA, unlined 3 1/4 collar) for around 4 bucks.