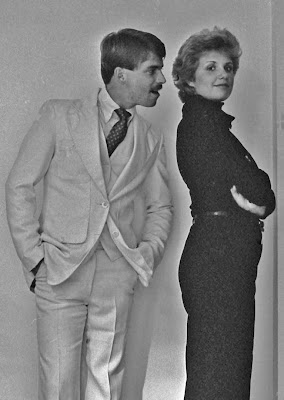 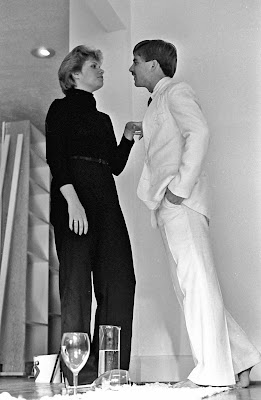 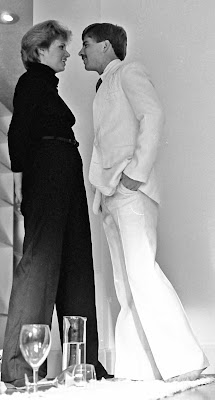 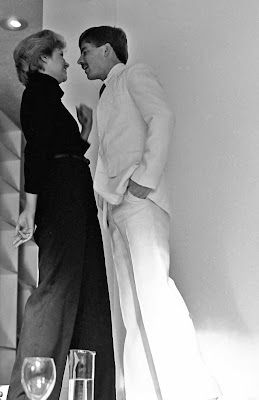 ADG or, Dust Bin as he's known in some parts, threw out a comment regarding his Disco attire and I think we may have another contest. Who has pictures with the most vulgar 70's get up.
Man, I was so creative...Black & White. Get it? The GI moustache, a $5 haircut and jacket lapels as wide as those trouser legs. The Fall of 1980 and I had just left the Army and was a freshman in college on the GI Bill. I was having a lot of fun despite my sartorial ignorance. Funny, you could pretty much say the same thing about me today.
That's the adorable 'MB' up there. A junior who was my Spanish tutor and who pretty much gave up on me in more ways than one. I was hopeless conjugating Spanish verbs (gritar, gritan, gritamos) and fitting in with her Commie friends. But the pictures take me back and I remember the afternoon like it was yesterday. I've always had a weakness for women with nice hands and short hair.
Posted by tintin at 07:05

Tinsnips....Oh man. Now I've really gotta step up and humble myself with the
'70's pics I've got in the posting wing. Oy. The bell bottoms were the first things to catch my eye. You must be proud.

Dust Mite- Get on it. I'm hoping for some Nik Nik sightings...

Why didn't I ever see this fine piece of haberdashery? I guess by the Christmas formal in winter 1980you were over the disco phase.
Actually,you look great in it! Que Longosta! :) MB had that Meg Ryan (in Top Gun) thing going on back then. I love these old photos...keep cleaning out the vault. ME

Well I'm pretty much at a loss for words... But, dig those, ahem, sideburns. The confidence you look like you had back then - with a mustache, in white - is nothing short of astounding. And actually, the suit is not that bad looking on you. Wonder how "MB" looks like in the new century. I'm totally on board with the nice hands and short hair.

Love the props. Is that a...lab beaker?

I am with Alice. Great shots.

The white suit: I never saw that coming.

What's the context of those photos? Who took them?

Was it the Flagler Halftime Theatre production of THE GREAT GATSBY?

Tintin,
These photos seem so, well, intimate. It's strange, both subjects couldn't be more clothed, but I still feel as if I shouldn't be watching them during such a private moment. D

M Lane- That's a peak lapel suit but I know where you're coming from.

DB- You remember when I got out...The one thing the Army was/is good at it is making you feel invincible. Fortunately the insurance business has taken that all away.

Alice- I was the production designer but my sister shot it with my Olympus OM-1 with power winder. I looved that power winder.

Blushing- I think I need another white suit. And an MB too...

WC- Sgt Nick Penis (I was one of his brass ball commandos) ETS'ed shortly after I did. He was in college somewhere in IL and needed pics of me for a report he was doing in a English 101 class. "Sgt Tintin: An American Hero" or something along those lines.

D- Some might say that about this blog. I'm wondering just how far I'll go for traffic.

Great pics...I am envious of the suit!