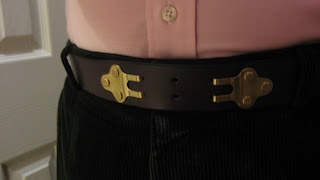 The Springfield Rifle belt was sold for years by LL Bean. Based on the sling from the '03 Springfield 30-06, this simple belt not only kept your pants up but borrowed design cues from the military without banging you over the head with a shovel. This subtle nod to the LL Bean customer was a hit. OK, I don't know if it was a hit. Maybe they sold three. But this guy bought one. 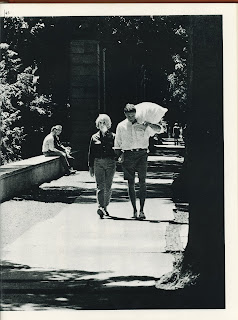 See the guy with the laundry bag? He's wearing a sling belt. Click on the picture for a closer look. This is from Take Ivy and so we're looking at 1965. I remember the belts being very popular in the southeast around the early to mid 80's. They were also advertised heavily by LL Bean in the New Yorker. Sometime in the early 90's I thought I'd like to have one and POOF... They disappeared. Just like the Greek in the joke.
There's this outfit called Colonel Littleton . Very popular with southern Trads. They had a variation of the sling belt that was sold by Willis and Geiger that was bought by Lands' End who ran it into the ground when POOF... Willis and Geiger disappeared. But it wasn't really a sling belt. I looked on and off for this belt going back to 1992. I kid you not. And then one day I found it. 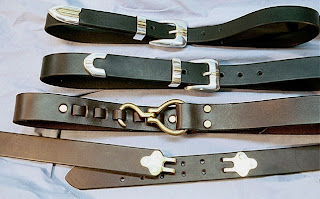 I ordered my belt from these guys. Narragansett Leathers is in Damariscotta, ME. The belt is $36 plus $9 or so for shipping. They're wonderful people who insist you call them to place an order. I like that. They'll also ship world wide. How much can a belt weigh? Those other belts look pretty heavy but the Springfield Rifle Sling belt is very light. It's made in the US. It's affordable. It's damned good looking. It's Trad. Hard to go wrong there. Now it's time for the belt you can drink. 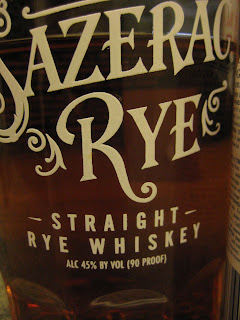 I think it appropriate to kick off the Friday Belt with a Manhattan. I was a bourbon drinker in college and the army. Not so much afterwards. Back then Wild Turkey was my brand. Why? Clint Eastwood ordered it in The Eiger Sanction. Is there a better reason than that? Anyway, I pour 2 ounces of Rye Whiskey in a glass without ice. I like Sazerac a lot. Tough to find but worth the effort. 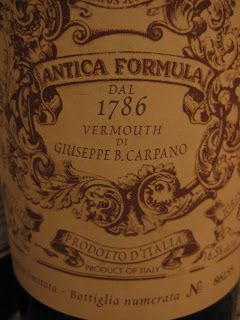 Add 1 ounce of sweet vermouth. I like Carpano. If you think Sazerac is hard to find wait'll you try and find this stuff. $29 a bottle. Steep for vermouth but this stuff is amazing. I use it in Americanos and there's nothing like it. It comes in a handsome tin that you can mail cigars and screenplays in to big shot film producers who you roommated with in college but now never return your calls or emails. 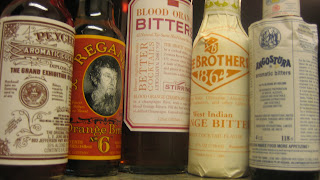 Being a fairly bitter man -- I like bitters a lot. For a Manhattan I use the two bottles on your far left. A dash of Peychaud's (a Sazerac connection) and two dashes of Regan's Orange bitters. Now add ice and stir with a cocktail spoon. One of those long ones. Stir for 5 minutes or so. Maybe 10. You want it very cold and you want some of that ice to melt. Strain into a chilled martini glass from the freezer and take a sip. Will a cherry or slice of orange help? I dunno. I never have the patience to put that stuff in. Next Friday we'll be looking at wine made with sour grapes. I have a lot of those.
Posted by tintin at 07:27

Love it. I'm putting both belts on my list.

Inspiring. You're doing for me what Clint did for you.

Thanks for the Colonel Littleton link. Some great stuff on their web page. And love the belts!

Nice-looking belts, but check out their website. Shouldn't a leather company know how to spell the word "burgundy"?

Thanks for the Manhattan recipe. I'm a bourbon girl myself. Jim Beam used to be my call but my favorite Kentucky cousin (he's a state representative of that hallowed commonwealth) introduced me to Woodford Reserve. I take it with two fingers of branch water.
P.S. thanks to him you may call me "Colonel."

Good eye on that Take Ivy photo. Great look with the Bermuda shorts.

Great way to describe the friday belt... any better and you'd be talking dirty to me. Not Trad!

You're right about the vermouth. Worth every penny. Take the extra moment to float a slice of orange (even if you have to run to the store and find one). It's foreplay... and it makes that tiny bit of difference.

I have to say that the provenance and style of the Colonel Littleton belt is not my cup o tea, but I do get the Clint/Eiger Sanction/Wild Turkey thing.

Interestingly, when the movie went to syndication on TV (It didn't take long!) Clint's Wild Turkey request was dubbed in with him asking for a "rye whiskey." It was probably done to avoid the tacit endorsement of a brand.

But you, a bitter man? Nah!

I like my Manhattans on the rocks. The cherry is a great thing to add, because it soaks up some booze while you sip the drink. It's a great little dessert for after you've finished the drink.

South of Atlanta, those particular types of belts would considered everyday wear....accompanied by a Remington 'over and under' shot gun and good bird dog.... ME

Do you have thoughts on other topics besides clothing? Because reading your writing is such a pleasure, I would love to hear them.

Keep up the good (understatement) work,

The only drink that may have fruit in it is an Old Fashioned, a Manhattan is not to be had with orange. Or on the rocks.

Nice looking recipe tintin, I'll have to try it. I usually base my concoctions off the 1949 Esquire Handbook for Hosts.

Tom, forgive the amateur in me... it's just that to get the blond to down at least three Manhattans I had to have the orange slices...

Sarte- They're back from holiday in March or April. Sorry, I thought they were taking a couple of weeks off and not a couple of months.

Michael Rowe- That Littleton stuff is a little too overboard for me but am glad you like it. $400 for a alligator Iphone cover strikes me as overboard but who am I...

Torch- Thanks for the comment. Williams ain't that bad.

Colonel Tessa- Did you get the license plates?

Heavy Tweed- I've been through that book with a fine tooth comb. A Kent sawcut R18 T to be precise.

CG- That vermouth is amazing. It'll be featured this Friday in my version of the Americano.

DB- Did not know that about the TV version. Man, the crap the networks did to film is amazing. Got your CDs yesterday. Thanks! Still looking for the musician from Austin. What was his name?

Anon-I may try soaking cherrys in that Italian vermouth. That might fly.

ME- I'm positive your old man wore one. I think he threatened me with it.

impressed- It's nice to see comments like yours. Thanks. Poke around here - - I go off on all kinds of tangents unrelated to clothes.

Tom - I saw the Esquire book at Argosy. I think this one was from the early 60s. Gotta get back there and grab it.

Great post all around! The folks at Narragansett Leathers are offering a steal. I've only been able to find that style of solid brass folding hoof pick belt for more than three times the price at NL.

I'm going to feature your Take Ivy photo. I hope you don't mind. Thanks so much!

Max- Feel free to use the photo. I've seen the hoof pick belt at Orvis. What's NL? Just caught some of your blog. Very nice stuff.

I didn't know anyone actually drank Manhattans anymore, they are a great classic drink.
On occasion I drink a Rob Roy sweeet, which uses scotch instead of whiskey, so I'm going to try the Sazerac vermouth. It sounds yummy.

Belle- The vermouth is Carpano. Try your Rob Roy with Laphroiag 10 year single malt. Very different and depsite mixing a single malt with sweet vermouth it's an outstanding cocktail.

I have a great vintage LL Bean sling belt from the 40's -- absolutely love it. Billykirk makes a version available on their website for $150 -- a little steeper than Narragansett Leathers, but i bet it ages beautifully.

chopsnyc-
Thanks for the link! Yeah, that's pretty steep and it was inspired from a horse harness or so they claim. How's your 40's version holding up? And were you the Chops that posted that great stuff for Longwing last year or are you another Chops?

Man --- you have great taste in spirits!