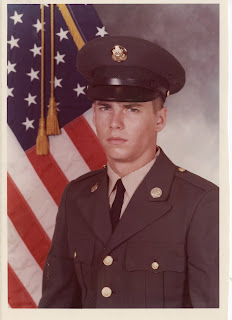 The portrait from Basic Training with the fashionable, "Bus Driver Cap." One sexy piece of head wear. On the day this was taken we were issued a dizzying array of dress uniforms (in winter and summer weight) that were never worn. On this same day the Army decided to turn me into a boxer man. Thrown five pair of boxers; I protested, "I asked for briefs!" Only to be answered with, "Keep moving shit head." I'm pretty sure if you asked for boxers you were given briefs. 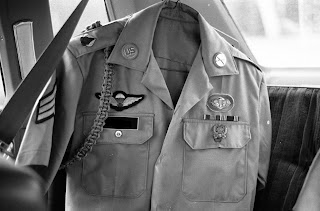 Been years since I've seen this. The old Army khakis. Wash and Wear as well. This was taken the day I got out (ETS'ed) and was on my way to my "Home of Record." I went in the Army because I felt I had to. Not out of any patriotic desire but more out of a destiny. My grandfather and father were both career Army. I knew I had to go. I hated it when I went in and by the time I left the Army four years later I had fallen in love with it. More for the friendships than anything else.

Never went back despite best intentions. I gave up ROTC in college to write. I wasn't the Army type anyway. But I did like hanging around those who were. Had I pursued a career I would have been discovered for the fraud I was. Instead of a career I have some great memories and some nifty bobbles. And I never had to shoot at anything other than a target. I was very lucky.

It often ain't fun, but everyone who comes out alive and unmaimed is better for having served. Every citizen should want to.

Thank you for service.

Had you been able to wear my Air Force dress blues instead, you would have had the entire outfit. Airmen departing basic were sometimes mistaken for a Greyhound convention.

Please note that it's officially "Veterans Day"
(with no comma),
not "Veteran's Day"
or "Veterans' Day".

Scott- Very true and thanks.

Tim- I went to a school at Keesler AFB and was amazed how bad AF uniforms were - - that and the morning "walk" as opposed to run. I still think about AF gloves...

Anon- You are right and thanks. An interesting history of why that was done. Correction made

Nice post. Good pictures. I suspect that most in the military are not cut out for it. I think we're close to the same age (HS grad '76 me). I never considered going into the military. Hard to imagine that it wouldn't have been good for me. Maybe not so good for the country though.

longwing- did you notice the dress greens are a SB peak lapel? How cool is that? I bet you'd have enlisted if you knew you'd get 4 peak lapel jackets - - for FREE!

There are many times I thought the Army was a complete waste of time and many times I wouldn't have traded the experience for a million bucks. It gave me interesting stories for cocktail parties, $335 a month while I was in college, a VA loan for my first house and most recently a ringing in my ears caused by 4 years of turning down hearing protection on firing ranges, in noisy aircraft and in a buttoned up Soviet Tank. See what you missed?

July and August 1967 were delightful in Biloxi without air conditioning. But at least there were the cockroach races were big sums could exchange hands. And even if you lost, you could always throw a saddle on yours and ride him back to your barracks. ;-)

Boxers or Briefs? During Army flight school, we were told we must wear all cotton undergarments under our military Nomex flight suits, in case of fire.
No such thing as an all cotton bra (need that elastic) and wearing my bikini panties left that “panty line” since the flight suits had Velcro tabs from the waist band that was up around my waist, way above the “hip huggers” from high school. So I wore my husband’s (male) cotton briefs, yes, with the nifty pocket right up front. Fit nicely, no panty line, cotton.
No problem until the day of the training accident and the Army Flight Surgeon couldn’t control his laughter at my underwear while noting in my Medical records that my Diaphragm showed up on my X-ray. Hey, I was married and didn’t want to start a family right then.
Can’t wait until the VA doctors see that entry.