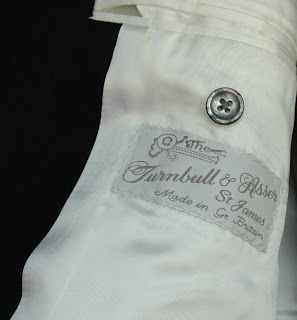 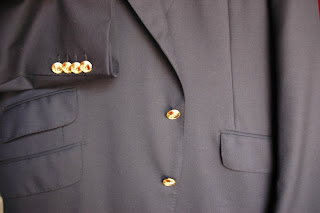 I own eight blazers. But this one...this one is my favorite. About four years ago - - maybe five. I saw a blazer much like this one. Unique in that it had hacking pockets with a ticket pocket. Not so unique in that it was single breasted. But unique, especially for a Yank, that it was double vented as opposed to the much more common single or center vent. By the way, I saw it in the window of Hackett near Lime St. A store I continue to love.
Upon my return to the states, I mentioned this unique blazer to some folks on a forum. I was pounced upon from all directions. The Trads hated it. "Not Trad at all!" "Must have center vent!" "Hacking pockets are not Trad!" The non-Trads didn't yell but calmly explained, "The blazer's origins are naval. While side vents are acceptable - -hacking pockets-- which derive from equestrian riding jackets--do not belong on a blazer. "
I posed the question to Jeremy Hackett, the owner of Hackett and someone whom I've always considered a Trad. Never heard back from him. Busy guy, what with his new book and all. By the way, "Mr Classic Jeremy Hackett" is a great book. I found it used at the Strand so it was a no brainer. A year or two goes by and I'm back in London sniffing around the summer sales on Jermyn St when I see it in the Turnbull & Asser window. A Navy blazer with hacking pockets. Only 850 pounds. Son of a ... I like it but not that much.
Couple more years go by and I wander into Turnbull and Asser on 57th St. And there it is. The navy blazer with hacking pockets. There's only one. It's my size. I throw it on and I'm looking at myself in the mirror. The salesman nods in approval. "That's not bad. Not bad at all." I ask, "How much?" "Three hundred but I'll see if I can get it knocked down to two fifty." He leaves me at the mirror and smile at my reflection. "TinTin, you magnificent bastard."
They knocked it down to $250. Pretty much threw a garbage bag over it with a plastic hanger but for two-fiddy who cares. Now that I own a navy blazer with hacking pockets I must re-visit the question. I email Jeremy Hackett again on his web site http://www.hackett.com/index.cfm?page=1016. I write, " I have been told due to the naval tradition of navy blazers, hacking pockets are a big no-no. Yet it looks great. What to do?" I guess since the book's been out he's not that busy anymore and he writes back, " Traditionally that would be correct, but unless you are a naval man then quite frankly I don't think it matters and I agree with you I think it would look great and a little bit rakish. Best wishes, Jeremy." Cheers to you, Jerry. There you have it. And now I have it. After almost five years.
Posted by tintin at 20:05

that is one sharp blazer-Trad-I'll tell you what is trad...the price... a steal really. the real action -not to mention fun & bona fide knowledge and research happens on these blogs.
sure my own tastes are fairly orthodox but I admire style and quality in what I will call a modern traditional look.
some forumites view traditional clothing through the prism of historical revisionism-all the more amazing when you consider their age 25 years ago-assuming they were even born yet..
a navy blazer might be the most versatile garment of all.
nice epix/post.

Trad is as Trad does.

If clowny-colored outfits are Trad and this blazer is not, then we've go to re-think our definition Trad.

Excellent balzer, by the way. Continue to enjoy it!

I consider myself to be a traditionalist, but I don't care what other so called "trads" or "WASPs" think is acceptable. Heck, if the qualifications to the WASP club were based on the strict rules set forth on my blog by readers, there would be maybe 10 in the world. Do you think the gent who made the first blazer said this is "trad"? I doubt it. He made it the way he liked it. The blazers repeated use throughout history made it a classic, not its finite details. I personally think you should add the details you like to your blazer. My blazer has pick stitching, side vents, purple lining, and really shiny brass buttons. Do I wear it because it is traditional? Yes. Did I care if someone would say it is not trad to have side vents? No. Anyway, I applaud you for making the purchase, and I am sorry for rambling? Still enjoying your blog btw.

Not trad. No way. Never.

Great story. Perhaps not trad in an American sense, but seems to my eyes to be very trad in an English sense. In either sense, one can never underestimate the appeal of a little rakishness. Very cool that Mr. Hackett responded. It would look great with the shirt and bow tie in the post below it.

One guy's Trad is another's trash. So it goes....
Your blazer is, by my definition, Trad (and very nice btw).
My travel blazer (wrinkle-free, polyester, ersatz twill) isn't Trad, but is necessary for a RoVer. Trad or not.
The "clownish" garb favored by many may indeed be defined as Trad (by those who need to display a fashion statement). A more conservative "preppy" style by others. There's room for all.

3B-That's hysterical and you're right about the 25 year olds. Hell, I bet Harris was wearing Nik Nik shirts in the 70s. I know I was. Back then I'd but whatever the sales girl told me I looked sexy in.

Anon22:45- I agree although I do own some clown outfits as well. Four paneled cords, lots of Madras and most recently a love of Indian Batik. Only to be worn in NYC and most recently at Banjar restaurant on the lower east side. Looked good with the King Fisher.

Richard- I met a girl once who told me my purple lining (MTM,DB, blue, chalk stripe suit) made her wet. God only knows what she would have said if it were bespoke.

Longwing- You'd be cutting edge in the southwest with hacking pockets. Wonder what it would look like with a Bolo tie?

phred/dad- "Be the last to a party and the first to leave." "Always drink the local beer." "Never take my last anything." "In a war, get behind the biggest gun you can find." Always, sound advice but what in the hell are you doing with a polyester blazer?

Alex Noir Gilchrist-Didn't I see pics of this on AA in '04? And of course it's Trad - - It's got beau coups soul. Although those Prince of Wales feather buttons should be changed. I'd go with the Royal Artillery. As phred/dad told me years ago. The Queen of Battle (infantry) tells the King of Battle (artillery) where to put the balls. Nice story to relate to the girls at the King Cole Bar. If only the Surf Club were still around.

I gotta' find a copy of 'Take Ivy' first. I keep looking and the prices remain very very silly.