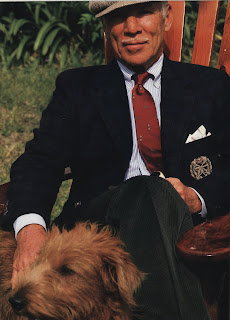 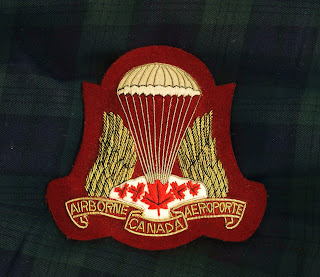 From M Magazine. I was always taken with Southwick's advertising. If anyone knows who the photographer was please clue me in. Isn't this guy great? Look at that nose. Such a craggy face with the aroma of Guiness and Single Malt wafting from his pores. The Meerschaum pipe just over the knee with that olive wide wale cord looks right at home.

This was an ad for "Terrier Cloth." That looks like an Irish Terrier. Whoever did this ad must have had a great time. It's so evocative and mood setting. It may be hard to tell on the post but that's a Blackwatch Plaid Sport Jacket. For years, I thought it was a Blue Blazer. It's so dark it looks solid. The tie and the shirt and the pocket square? Beautiful pairing. The pocket square is normal, low key and not foppish at all. The cuffs of the shirt lead me to believe it's Brooks Brothers as does that perfect roll. Who knows. I've seen the tie before but can't place it. Maybe Herzfeld. Maybe Polo.

Lastly, the blazer patch. This one has two crossed rifles with any Latin tactfully hidden from the camera. I have a blazer patch from the Canadian Airborne. I went to Jump School in Edmonton and was awarded Canadian Jump Wings as part of a Soldier Exchange program. I've worn it only once. On a Double Breasted Blazer with an ascot. I felt like an asshole. Looked like an asshole. Was an asshole. Never wore the blazer patch again. Maybe when I'm this man's age. I'll tell you one thing. When I do go grey... I'm growing that exact moustache.
Posted by tintin at 18:01

Excellent photo. The slightly cocked tweed hat adds a bit of rakishness to the total look, and the black watch jacket is a masterpiece. But the cut of that moustache is brilliant; it just would not be the same if it wasn't grey.

Gread ad. Thanks for posting. This chap has the look of a gentleman boxer, IMO. Does anyone else see it?

I'm an enormous Southwick fan. I just ordered a new Southwick MTM, a dark grey single-breasted number with side vents and cranberry red lining. Do you have any more Southwick ads to post?

I wish I had kept my old M magazine collection. It still may be around in storage somewhere. Some wonderful articles and ads in that magazine.

That nose looks like its been broken more than once and more Southwick to come. I think I have 3 or 4 more including some on location in Bermuda. I'm looking at SWick's MTM. Your exact same suit but in a light solid grey. Reminds me of something Robert Petrie would wear.

I certainly agree re: M Magazine. I have a few, but wish I had kept them all. With the exception of an ocassional piece in Men's Vogue, and Richard Merkin's 80's stuff in GQ, that's the last time anything worthwhile appeared in a US men's fashion magazine.t

Fuzzy memory, but the photographer's name may have been something along the line of Rob or Ron McGrath. And I think he may have been from MA. As stated, fuzzy memory. Could be completely mistaken. jam

Richard- I have hauled 40 of them around since the late 80s. Went to Gallaghers in NYC to replace some missing months. $20 a pop. I just couldn't do it.

Jam- You're knowledge is amazing. Thanks.

Can't take the moustache, but everything else looks great.