Ralph Lauren and the US Army 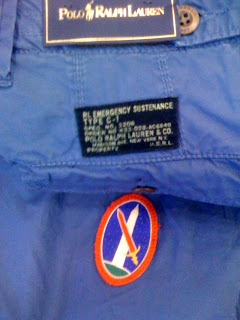 I came across these shorts in Florida. Now, I don't want to beat a dead horse but what is happening at Polo? I love their Madras shorts. I'm the proud owner of three Purple Label suits. If it wasn't for Polo a lot of wonderful Trad clothing would disappear. However, what is their obsession with Military inspired clothing during a war? Some designer has decided to take The Old Guard patch and sew it on the posterior of a pair of "Emergency Sustenance" shorts.

Who is the Old Guard? Ever see the Tomb of the Unknown Soldier? That's the Old Guard. The Old Guard buried my Grandfather at Arlington National Cemetery. Is this some one's idea of a joke? I'm a pretty liberal guy. Never voted Republican. Hell, I've worked on two Democratic campaigns but I'm not taking this crap anymore.

I have to assume since the people who serve in the military would never wind up a designer at Polo that some idiot did this while flipping through a book of unit patches and thought, "Wow, cool patch."

It's not just Polo. Someone out there saw the XVIII Airborne Corps unit patch and decided that it looked cool. They've sewn it on the right shoulder of a "puffer" coat. A unit patch on the right shoulder has some pretty heady meaning in the Army. It's the unit you served in combat with. I saw this coat at the corner of 57th Street and 2nd Avenue a couple months ago. I was with the girlfriend when I approached the young man wearing my old unit patch to ask him when he was in XVIII Airborne Corps. The girlfriend tugs at my arm and says, "Please don't." I replied, "What?" She says, "I know what you're going to do and I beg you...please don't. Not here."

So I didn't. But I'm gonna start. Fair warning to those of you who wear this shit.
Posted by tintin at 09:59

I'm with you 100%, brother. That crap really pisses me off. I've also received the "Please don't" plea from Naval Wife. More than once.

Hullo Trad,
Agree with you on this vehemently. Also was mighty put off to see the flag-draped hottie on another website that you objected to. While I didn't serve, I'm from a military family (West Point and Naval Academy on father side and VMI on mother) and hold the armed forces insignia and our country's flag in highest respect. To turn them into fashion accesories is a desecration.

As a veteran, I agree completely.

The irony of this (and irony is only hypocrisy with style) is Polo's aggresive protection of its own insignia or "logo" in the language of the civilians.

Okay, your a very good blogger and I'll bet we're within 3 degrees of separation. The stories and dates are too close would love to interact. Email me at Homer's Odd Isn't He.

Personally, I think the words "conservative" and "liberal" should be removed from politics. I could explain, but I would open up Pandora's Box.

I myself have worked very closely on many Republican campaigns, and I agree with your opinion about the patches. I still love Ralph though!

I would think that the military style patches (now a part of Ralph's strategy) are in poor taste.There has always been something about the RL brand that I have found off putting-not sure why,
He has copied Brooks(and outdone them at times) and maybe kept a style alive(albeit w/his vision). Could be that these traditionally minded blogs(and their partisan commentators) are really seeking not so much a look but some sort of tangible authenticity.Ralph ran with the Brooks idea and turned it into an aspirational costume party w/theatrical sets which rival anything the major film studios could come up with. these patches are not even designed to show support for armed forces but are for the ultimate poseurs. He has cheapened the brand and that is poor pr. i do have a couple of (I happily admit) thrifted check RL button downs-maybe my roots are in New england thrift -certainly not the expensive "put on" exhibited here.-sorry I just wont pony up for Ralphs frivolity.

Here here TINTIN. I'm with you on this one.

Homer-In the mid 80s I was a member of the NYC Museums Council. Perhaps our paths did cross. That's a helluva site you go there. It's like going thru the V&A. Freeman's in Phila is my favorite auction house. Good people.

Anon 17May 1246 hrs- When I was in college the president of the Young Republicans asked me to join. I was a veteran and very Trad. I told him I was a Democrat and I think he poo'ed his khakis. Things are not always what they appear.

By the way, look up the definition of Liberal and Conservative in the dictionary and tell me which one you want to be.

3button Max- You are a favorite poster of mine here. Great insight and honesty always. I admit I bought all my Purple Label suits on sale. Polo carries with it significant baggage. But he does kick out some great product. I found a Purple Label silk robe made in England (Chester Barrie?) in a FL outlet some four months ago for $120. That ain't ever gonna happen at Herzfeld or J Press. Keep an open mind.

Michael- Be careful. I was infamous in the Army for getting people lost. But we always did have a roaring good time.

tin tin -as always , enjoy your posts.(Mrs 3 button Max is the polo devotee) I cant help but think that the pony may be on a slippery slope(towards the glue factory-no actually the clothes are well made and fabric is good)much like Hilfigger heading towards the hip hoppers but began by marketing strategies aimed at neo preps. Everything has a shelf life and expiration date I guess-

I'm late to this and I'm only here to say what good comments there are here on this subject.
These things DO have meanings - Some you can play with & some you have to treat with more respect. Everything is NOT up for grabs.
I'm a very conservative (and probably also Conservative) dresser by American standards, but my politics lie elsewhere - That isn't the point. The point is that even to a style obsessive like me there ARE certain cultural signs & symbols which you do not play with & cheapen just for the sake of style or fashion.
I think Ralph has crossed a line here. And it's not usually like him to be so clumsy.
Russell Street.

Here we go. I disagree in part and really just have a different view. I have been in for 4 years now (joined april 21, 2004-the date of my 17th birthday) in an aviation unit in Indiana and am currently an officer candidate. My style is basically my collegiate, preppy stuff (jcrew chinos, tag heuer watch, topsiders, vineyard vines belts, gill marine jacket) mixed with my rotc sweatshirt or fleece jacket and it works really well. And I aspire to be a designer after I go to war. Plus the fact that Ralph Lauren was in the military for a few years should give him the right to design clothes like that or approve of their design. So you are wrong about a person serving in the military becoming a designer at Polo- Ralph Lauren himself proves this wrong! As far as someone else wearing a patch of something for whatever reason- i think its cool. I would never do it but thats just my personal style-and I am not the point here anyways, the non military people are. But I think its sad that such a social disconnect between style and the military exists. Perhaps this case of someone 'somewhat style conscious' wearing a patch on their puffy and obviously non military jacket just confirms this disconnect. I mean how are they supposed to know anything about Airborne? And also I think it is lame that you had a motive to try to tell this guy off or something- I mean be the bigger man, come on. Just completely unbecoming behavior. Give the civilians a break!

As a member of the United States Army. I am amazed that there are people out there who think this is acceptable in any way shape or form. When I was a child, if you wore a patch of any military branch, that meant either you were in that unit, or are in that unit. It is illegal to wear the rank of military personell on your clothing. Why is it not illegal to do the same for the unit?

I realize that the sum of humanity is going down the drain but for those people with some mental fortitude, SHOW IT!!! Let the lesser people know what is wrong and help them fix themselves. Apparently their parents failed them in some way. Help their gene pool by showing their mistakes (better done in public).

This is to "Be The Best." I'm not sure where you "hail" from, but we are not stating that U.S. Military personnel can't be fasion designers, just that they (if they decide to do so) should not try and put the two together. Especially if the patch is anywhere near the posterior of someones pants. I say wear the patch proudly, ONLY IF you served with that unit. If you don't know what it is, don't wear it.

I can't expect someone from "a unit in Indiana" to understand "
The Old Guard" mentality. So I'll close it at that.

Anon- Better late than never. Well said and I'll add that much has happened over the year this occured. Ralph Lauren's legal department ignored my requests to remove this clothing so I went to G-1 at the Pentagon. After they inspected the shorts they had their attorney contact Ralph Lauren legal who agreed to remove the short and any other piece of attire that used military rank. I still see some Naval Chief Petty Officer rank sewn on white double breasted jackets (who in the hell would ever this?) and some Army unit insignia from old WWII divisons but for the most part Polo seems to have taken the Army seriously and ceased this activity.

I've repsonded to 'Be the Best' on another post and think it fair to cut him some slack. He's young. When I was in the Army I would read Advertising Age in the post library at Ft Bragg. I thought it would be easy to get a job with an ad agency in NYC. Very naive of me.